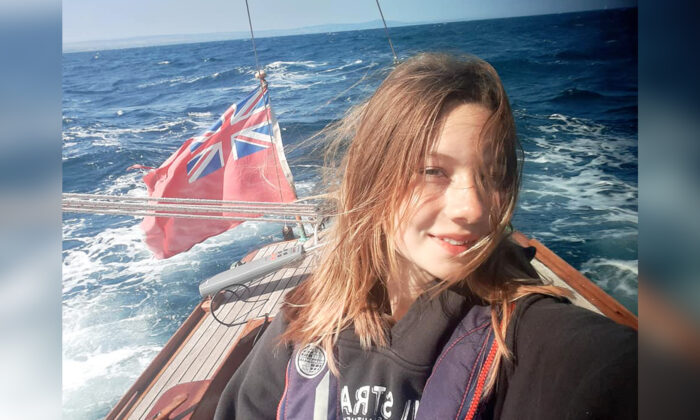 After convincing her parents to let her embark on the biggest solo sailing venture of her life, a teenager became the youngest person ever to single-handedly sail 1,600 nautical miles around Britain.

Katie McCabe, 14, is the tiller of her very own boat—the beautiful turquoise vessel “Falanda.” In August, she broke the record previously held by Timothy Long of Aylesbury, England, who completed the same trip at the age of 15.

Katie started from her hometown of Topsham, Devon, on June 30, and finished the journey 7 1/2 weeks later. She was escorted into the dock by a fleet of 20 boats and welcomed home by a cheering, waving crowd.

Completing the expedition, she shared her elation on Facebook, posting: “Wow, what a return! Tonight I can officially say I have sailed single-handedly around Britain, something I have been dreaming of doing since forever!”

Traveling counterclockwise, Katie charted an epic course: passing the River Solent, the Thames, the Firth of Forth, the Caledonian Canal, the Irish Sea to Wales, the Ramsey Sound, Milford Haven, crossing the Bristol Channel, around Land’s End and the Lizard, and arriving back home to Topsham.

She navigated the route herself, and enjoyed the peace and quiet of life at sea. Occasionally accompanied by schools of dolphins, she spotted native puffins and cheeky seals, and was dwarfed by tankers further out at sea.

Nor was it just for fun. Katie partnered with Sea Shepherd UK, raising over 16,000 pounds (approx. US$22,000) in donations with funds going toward the charity’s efforts to conserve and protect marine wildlife.

But before the trip even began, Katie admitted she faced headwinds when she fielded the idea to her parents, Hazel and David McCabe. “Dad was all for it,” she told the Daily Mail. “But Mum wasn’t keen.”

Katie “passed the Mum test” during a family trip to the Scilly Isles in 2020, impressing her parents by sailing Falanda by herself. Nevertheless, David, 54, kept a watchful eye from a distance, trailing his daughter on her record-breaking trip in case she “crashed into a million-pound yacht,” said Katie.

Still, with her father as far as five miles behind, the teen felt “very alone” under the cover of darkness.

As for her daily toil, the seafarer was self-sufficient, spending between 8 and 15 hours at sea every day, while mooring at harbors most nights, where she would check in with dad. “The longest period at sea was 32 hours,” she recalled. “By the end of that I was exhausted and there hadn’t been time to put my protective gear on. I got pretty wet.”

Katie’s mom, Hazel, 49, knows her daughter can weather storms, both real and figurative. “She’s very determined,” Hazel said. “She’s seen it all through and we are very proud.”

Among those who came to congratulate her was Timothy Long, the previous record holder.

“Last year, I got to meet Timothy whilst he was on his way around Britain to become the youngest person to go round solo,” Katie shared on Facebook. “Almost a year later, he was at the boat yard waving me in as I broke his record.

“I think it was great of him to even be able to look at me and Falanda, never mind be actually friendly,” she added. “I’d like to think I’d be that ‘nice’ if someone younger went round next year!”

Katie found her sea legs earlier than most. As a toddler, she accompanied her parents on their three-year, 14,000-mile honeymoon trip at sea. She returned home with them in 2008 having found her hereditary love for sailing.

Alongside her parents and younger brother, Reuben, 11, Katie spends every family holiday at sea. The siblings were even home-schooled during a months-long excursion to Spain and Portugal, and once lived on a moored boat; it came as no surprise to Hazel and David when Katie asked for her own vessel at the age of 12.

They bought an 800-pound (approx. US$1,100) refurbishment project, which eventually became Falanda, the turquoise beauty that saw Katie finish her record-breaking voyage.

Since her return to dry land, she’s been preparing for a new school semester, though she managed to squeeze in a boat trip across the English Channel with her mother first.

She told the BBC that female sailors Ellen MacArthur and Laura Dekker inspire her to dream big. “I’d like to do something like they’ve done,” she said. “So maybe racing [is what] I’d like to try next.”