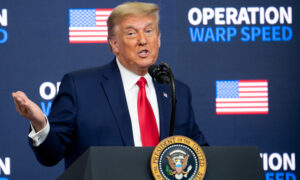 YouTube announced that from Dec. 9 it will block and remove content that contains statements “alleging widespread fraud or errors changed the outcome of a historical U.S. presidential election.”

The Google-owned firm said that it was because the “safe harbor” deadline on Dec. 8 in the presidential election had passed, claiming that “enough states have certified their election results.”

The Epoch Times has not declared a winner of the election.

“For example, we will remove videos claiming that a presidential candidate won the election due to widespread software glitches or counting errors. We will begin enforcing this policy today, and will ramp up in the weeks to come,” the firm wrote. “As always, news coverage and commentary on these issues can remain on our site if there’s sufficient education, documentary, scientific, or artistic context.” It did not elaborate on the context it requires.

The company then said that it will “guide” people to “authoritative information” provided by corporate news outlets such as ABC, CBS, NBC, or CNN. Over the past month since the election, those news outlets have provided little coverage of lawsuits or allegations of election fraud.

The Epoch Times has reached out to President Donald Trump’s team for comment.

On Twitter, YouTube’s announcement was slammed by conservative commentators, who said the company is engaging in censorship.

“YouTube has declared you are now forbidden from criticizing the government’s handling of the election,” wrote OANN’s Jack Posobiec. Several weeks ago, OANN’s YouTube channel was suspended and demonetized.

The move is sure to draw the ire of certain members of Congress and Trump himself, who in recent weeks, have suggested social media and tech companies should not have the protection of the federal Section 230 law. Lawmakers from both Republican and Democratic parties have signaled the law should be rewritten or repealed, arguing that it shields such firms from responsibility.

Critics of the measure say that it allows Big Tech firms to get away with censorship and make poor content moderation decisions. Many conservatives have said YouTube and other social media companies have engaged in censoring pro-Trump or conservative viewpoints.

An October 2020 lawsuit filed against YouTube said the firm repeatedly breached its own terms of service by deleting their pages or suspending them without cause and didn’t tell them the reason why.

“Plaintiffs remain baffled as to what, specifically in their content-led them to be part of the massive de-platforming, other than the commonality that they are conservative news channels with widespread audience reach,” wrote attorney M. Cris Armenta in the complaint, which was filed in California federal court on behalf of several plaintiffs. Armenta argued that YouTube violated their First Amendment rights, saying it “engaged in state action by capitulating to government coercion” to purge the accounts.