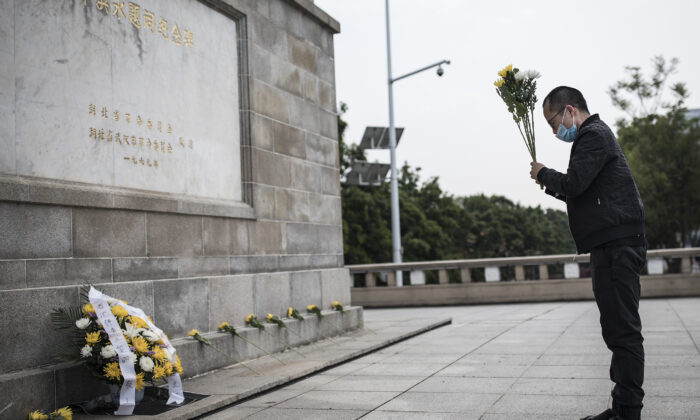 A resident presents flowers to martyrs who died in the fight against the CCP virus outbreak and compatriots who died of the disease in Wuhan, China on April 4, 2020. (Getty Images)
Social Issues

Jan. 23 marks the first anniversary of the Wuhan lockdown due to the CCP (Chinese Communist Party) virus outbreak. Amid the COVID-19 pandemic, Wuhan residents voiced their concerns and called on more people to reflect upon the unprecedented disaster and prevent it from recurring.

A local surnamed Hao told the Chinese-language Epoch Times that officials regard Jan. 23 as a sensitive date, and they have cautioned many residents against accepting interviews from foreign media outlets. He said they are attempting to cover up their botched handling of the CCP virus when it first broke out in Wuhan.

A white-collar worker surnamed Zheng lives near the Huanan Seafood Wholesale Market. In the early stages of the outbreak, the Chinese regime claimed the CCP virus originated from the seafood market. Zheng said in an interview that one year ago, the Wuhan lockdown caught millions of residents off guard: normal life was suddenly disrupted—countless families encountered troubles, and many had difficulty shopping for supplies and seeing a doctor.

“During the lockdown, days were really tough,” he recalled. “Getting stranded at home was a painful thing.”

“Luckily, I was able to circumvent China’s firewall and read the news from overseas media outlets. Also, my family has certain privileges within the CCP’s system. So, I had access to some information about the CCP’s coverup of the pandemic. I learned that the actual pandemic situation is far more serious than what’s been officially reported. I knew that the lockdown was an option. Nonetheless, even people like me didn’t anticipate that the CCP’s mishandling would cause such disastrous consequences—massive numbers of people infected [with the virus], deaths, and a hard-hit economy,” he added.

In Zheng’s opinion, China’s initial handling of the outbreak was lousy.

He said that local authorities silenced the whistleblowers and disregarded concerns over the risk of human-to-human transmission. Local officials and elites still attended the annual “Two Sessions” (an annual key meeting among top CCP officials) and other public events. The authorities stayed silent until the outbreak got out of control, Zheng said.

Then came the order to lock down the epicenter on Jan. 23.

“By this time, however, virus carriers had spread the disease in other parts of China and other countries, causing enormous, irredeemable losses, which could have been avoided if the Chinese regime had been transparent [about the whole situation]. That’s the most plaguing part of the story to the public,” said Zheng.

The “Two Sessions,” or “Lianghui” in Chinese, is a high-level meeting among China’s rubber-stamp legislative bodies—the National People’s Congress (NPC) and the Chinese People’s Political Consultative Conference (CPPCC). They are held first locally and then in Beijing at a later time of the year. The Wuhan NPC and CPPCC held meetings between Jan. 6 to 10 and between Jan. 11 to 15 in 2020.

Zheng said that the public is heavily brainwashed by the CCP. He pointed out that they seemed to have forgotten how COVID-19 became a global pandemic due to the CCP’s mishandling of the outbreak at the initial stage. Even worse, the people gradually believed the official narrative, which creates a positive image for the regime, he said. Zheng used the example of how Beijing touted China’s achievements in creating COVID-19 vaccines as their contribution to the world in fighting the pandemic. Many Chinese have mocked Europe and the United States, regarding their large numbers of COVID-19-related deaths as a failure of the democratic system, he said.

Zheng emphasized that there are many people around him who are gullible and easily believe in the CCP’s lies.

Reflecting on Past Experiences

Zheng believes that the Chinese regime should rethink why its pandemic response didn’t work, though it had supposedly learned from past experience in battling the SARS (severe acute respiratory syndrome) pandemic in 2003; why it hadn’t reported virus cases, issued warnings, and banned large-scale social gatherings during the initial outbreak; and why it has continued its efforts in concealing the severity of new outbreaks while using draconian measures to maintain social order.

Zheng added that citizens should ponder on how they can save themselves and change the status quo while living under the one-party rule of a communist regime, and why they easily forget about tragic incidents from the past.

Another resident surnamed Hao shared his perspective. In the name of fighting against COVID-19, he believes the CCP is using the virus as a tool to enslave the people, which could turn China into a modern-day concentration camp.

A team of experts, led by the WHO (World Health Organization), arrived in Wuhan on Jan. 14 to investigate the origin of COVID-19.

Zheng hopes that the team will carry out a transparent and thorough investigation into the origins of COVID-19.

However, on Mar. 12, 2020, China’s Ministry of Foreign Affairs spokesperson Zhao Lijian tweeted a series of posts, suggesting without evidence that the United States was the source of COVID-19. He wrote on his Twitter account, “It might be US army [sic] that brought the epidemic to Wuhan.”

Zheng said the official data of COVID-19 deaths is questionable.

By official accounts, as of April 17, 2020, the latest figure of Wuhan deaths was 3,869, according to the findings released by the Wuhan command center for pandemic prevention and control.

However, many people expressed skepticism.

According to a study that has not yet been peer-reviewed and was posted to the U.S.-based SSRN website, total COVID-19 deaths in Wuhan was estimated to be at least ten times the Chinese official data. The report’s information was based on official government figures, state and non-state media reports, funeral urns distribution, and cremation services in the city.

SSRN is a digital platform for the dissemination of early-stage research.

Zheng said that Chinese officials, from top to bottom, should be held accountable for their roles in covering up the outbreak.

Zheng and Hao expressed concern about the whereabouts of citizen journalists who’ve been persecuted by Chinese authorities.

Fang Bin, Zhang Zhan, Chen Qiushi, and Li Zehua traveled to Wuhan in early 2020 to document the outbreak on-the-ground. Fang remains missing, after friends said local police broke into his home and took him away on Feb. 9, 2020. Chen also went missing at around the same time. His whereabouts remain unknown. A tweet from Chen’s Twitter account, currently managed by his friend, on Dec. 13 said he has been “out of contact for 311 days after covering coronavirus in Wuhan.”

The two interviewees called on the international community to pay attention to Fang’s plight.