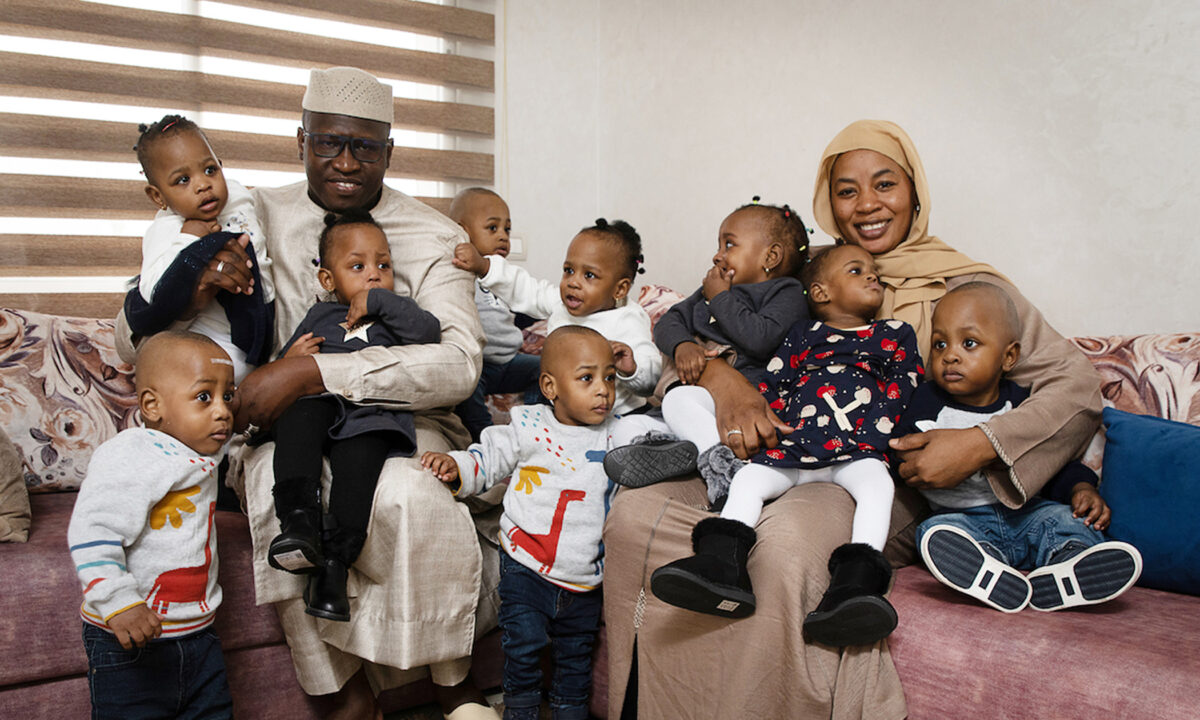 The world’s only known surviving nonuplets, five girls and four boys who were born in Morocco, have finally flown home to Mali in West Africa with their proud parents at 19 months old.

Abdelkader Arby and Halima Cissé traveled home with their nine babies on Dec. 13 after 19 months of expert, round-the-clock care from Ain Borja Clinic nurses at a specially-equipped apartment in Casablanca. Their story hit headlines, and the thriving babies earned themselves a Guinness World Records title of most children delivered at a single birth to survive.

Due to the high-risk nature of her pregnancy, Cissé had been flown to the specialist clinic by the Malian government ahead of the birth, where she and her husband learned she was carrying nine babies. However, the couple had previously believed they were expecting only seven.

Arby, an officer in the Malian army, told Guinness World Records: “We also thank, after the Almighty, the authorities of my country, Mali, who put everything in place for the follow-up and expenses.”

Finally home, the parents, who also have a 4-year-old daughter named Souda, are adjusting to life as a family of 12. “It’s not easy to put them to sleep all together,” Cissé, 27, said. “We cuddle them so they can sleep; they really like cuddles to sleep.”

From surviving to thriving, it has been a journey for the nonuplets.

The girls–Kadidia, Fatouma, Hawa, Adama, and Oumou–and the boys–Mohammed VI, Oumar, Elhadji, and Bah–were born prematurely via Caesarean section at 30 weeks gestation on May 4, 2021. They weighed between 1.1 and 2.2 pounds each (0.5 – 1 kg).

Dr. Rochdi Talib, President Director General of Akdital (the clinic operator), said: “We had to treat the mother before it was too late, to make sure there was no post-partum hemorrhage. Thank God, we had the technical resources and highly-qualified medical and paramedical staff; 32 people worked on this.”

However, the mother and her babies, with the support of Arby, their loved ones, and their home country were a family of fighters.

On the nonuplets’ first birthday, Arby told the BBC that the babies were “all crawling now. Some are sitting up and can even walk if they hold on to something. It’s not easy, but it’s great. Even if it’s tiring at times, when you look at all the babies in perfect health, [in a line] from right to left, we’re relieved. We forget everything.”

He further said: “I hope God blesses everyone who doesn’t yet have children, that they can have what we, the parents of nonuplets, currently have. It’s beautiful, a real treasure.”

Nonuplets are extremely rare. The couple’s babies represent the first recorded case of nine siblings from a single birth surviving more than a few hours. The previous Guinness World Records title was held by eight babies born to Nadya Suleman of the United States, otherwise known as “Octomom,” in 2009.