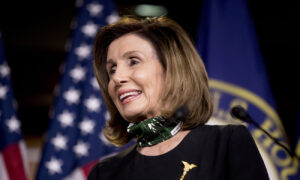 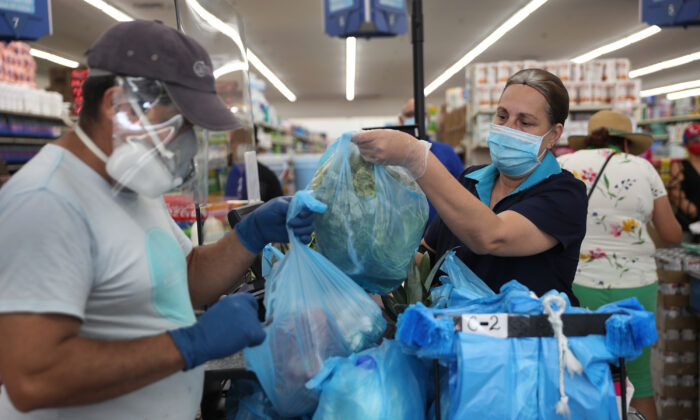 A cashier wears a mask and gloves at the Presidente Supermarket in Miami on April 13, 2020. (Joe Raedle/Getty Images)
Economies

With Pandemic Relief, Many Americans Make More Money While Unemployed

WASHINGTON—The COVID-19 pandemic has devastated large swaths of the U.S. labor market, leaving millions out of work. As businesses across the country are anxious to open their doors, they may begin to face another challenge.

The unemployment insurance program expanded by the coronavirus relief package is so generous that it might discourage workers from returning to work, economists say.

The Coronavirus Aid, Relief, and Economic Security Act (CARES) Act was signed into law on March 27, marking the largest stimulus package in U.S. history. The bill, among others, substantially expands unemployment insurance in order to help workers who lost their jobs due to the pandemic.

One provision of the bill, the Federal Pandemic Unemployment Compensation program, provides a $600 weekly benefit on top of regular unemployment insurance benefits. This additional payment in the CARES Act provides income expansion rather than income replacement for most unemployed workers throughout the country.

According to a study by Peter Ganong, Pascal Noel, and Joseph Vavra, economists at the University of Chicago, 68 percent of people who are eligible for unemployment benefits receive compensation that exceeds their prior wage. Before the pandemic, the program typically provided unemployment benefits that were a fixed fraction of workers’ previous earnings.

The crisis, however, transformed the unemployment system, which is now rewarding jobless workers with more.

The study found that the estimated median replacement rate—the ratio of unemployment benefits to the worker’s original weekly salary—is 134 percent, and nearly 20 percent of unemployed workers are receiving benefits at least twice as large as their lost wage.

The economists also demonstrate the weakness in the current system. Certain workers are receiving more money to stay at home than employed workers are getting who may be putting their lives at risk by working at hospitals or grocery stores.

“For example, the median retail worker who is laid-off can collect 142 percent of their prior wage in unemployment insurance, while grocery workers are not receiving any automatic pay increases,” the economists stated in their report.

The research concludes that while there’s a strong argument in favor of income support during the pandemic, unusually high replacement rates “can induce both distributional concerns between ‘essential’ and ‘non-essential’ workers and labor supply disincentives as the economy recovers.”

The CARES Act also expands eligibility to many workers who were previously ineligible for unemployment insurance, such as self-employed people and gig workers, which will run until the end of the year.

The $600 supplemental benefit under the Act will expire on July 31. The new $3 trillion coronavirus relief package passed by the House Democrats on May 15 would extend the benefit to Jan. 31, 2021. The bill, however, faces an uphill battle in the Republican-controlled Senate and White House.

Many Republicans are concerned the expanded benefits would harm millions of small businesses that are struggling to go back to normal.

Ernie Tedeschi, policy economist at Evercore ISI, believes that withdrawing the $600 emergency benefit prematurely might cause issues as well.

“I agree that wage replacement rates above 100 percent are not a desirable permanent fixture of the labor market, particularly when it’s healthy. But I worry more about the opposite risk right now,” he said at a webinar hosted by the National Association for Business Economics (NABE) on May 18.

If the government withdraws the benefits prematurely, that would effectively give unemployed workers a “50 percent pay cut or more midway through the summer, with no recourse for them,” he said.

He proposed that the unemployment benefits “could be gradually tapered off in states that are improving.”

In just eight weeks, 36.5 million Americans filed for unemployment benefits, more than 1 of every 5 workers in the United States. And the number is expected to rise.

The scale and speed of job losses in the United States is unprecedented, wiping out more than two decades of employment gains, according to Julia Pollak, labor economist at ZipRecruiter, an online employment marketplace.

However, there are some glimpses of hope. Despite a staggering labor market disruption, some companies are in “a completely unprecedented hiring spree,” she said at the NABE webinar.

Compared to April 2019, “software engineering jobs have risen quite dramatically. And nursing jobs have really shot through the roof even though we’ve seen large layoffs of nurses at many hospitals,” she said.

Companies that have the most job listings right now include Amazon, Shipt, Oracle, Walmart, CVS, Uber Eats, and Starbucks, according to Pollak.

A recent survey by ZipRecruiter showed that only 27 percent of workers reported having the same hours and pay that they had before the crisis. Half of the respondents had been laid off or furloughed and the remaining 23 percent had either seen their working hours cut or their wages cut, or both.

However, the survey found that 87 percent reported they would apply for work now and the majority of them defined their need for a new job as urgent or extremely urgent.

Another survey by Kaiser Family Foundation showed that vast majority of people (83 percent) who have lost their jobs due to the coronavirus expect to get previous employment back within six months.