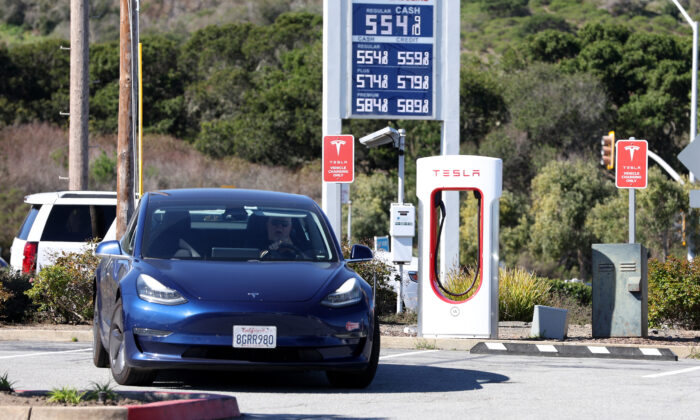 A Tesla car leaves a Supercharger after recharging its battery in San Bruno, Calif., on March 10, 2022. (Justin Sullivan/Getty Images)
Environment

How Mass Adoption of Electric Vehicles Will Affect the Power Grid

In January 2021, the Biden administration announced its plans to transition the United States to 100 percent “clean” electricity by 2035, and by 2030 to have half of all new vehicles sold be zero-emission vehicles.

One hundred percent clean energy by 2035 is an ambitious goal, and adding a considerable amount of electric vehicles (EV) to the country’s power grid is forecast to increase electricity demands substantially.

For example, in 2021, EV sales reached 6.6 million, according to the Department of Energy’s (DOE) National Renewable Energy Laboratory (NREL). And the increase in just light-duty EVs added 1,700 gigawatt-hours in annual energy load to the U.S. electric grid, according to the independent and nonprofit energy research firm Electric Power Research Institute.

Utility companies have proposed billions in new infrastructure projects to meet the forecasted increase. And the DOE has asked a consortium of research labs such as Pacific Northwest National Laboratory and NREL to contribute to an integrated systems analysis report on the impacts of EVs on the grid.

These labs found that the grid can handle high-penetration EV scenarios by applying specific strategies.

Indeed, if EV sales reach the high-penetration scenario of 6.8 million annually, and travel 12,000 miles a year while requiring 3.8 megawatt-hours per year of energy generation per EV, the total increased energy demand for EVs on the grid will equal 26 terawatt-hours (TWh), the report further reveals.

A separate report by Matteo Muratori, NREL’s team lead for integrated transportation and energy systems analysis, found that high EV integration could result in a 1,424 TWh electricity consumption increase by 2050.

Meintz said that, generally speaking, greater EV use will lead to higher electricity demands, and the grid would need to be “built out” to accommodate the increase. He likened this to the early 1900s, when home air conditioners necessitated upgrades to the electric grid.

“ACs were a pretty big load, but we built additional distribution and transmission to handle it,” Meintz stated.

However, he said there are now ways to mitigate electric distribution and transmission upgrade requirements, and one way is through smart charge management.

“The vehicle and charger are smart enough not to require user integration,” Meintz said. For clarity, he specified that users wouldn’t have to go to their garage and plug in their EV at a certain time. Instead, EV owners could plug in when they get home, and the EV would be programmed to charge when electricity demand is low.

When asked how moving to green energy sources like wind and solar might impact EV charging, Meintz said it would depend on location and availability.

“Wind is really a nighttime resource, and solar is for during the day,” he said. “Some locations might not have enough distribution, but it depends on the locations.

“EVs are a resource that can be programmed to charge when that resource is available.”

When pressed about the grid’s ability to handle uncoordinated EV charging, Meintz circled back to smart charging.

However, Muratori’s report states, “Uncoordinated charging of EVs will lead to increased system peak load, possibly exceeding the maximum power that can be supported by distribution systems and generally increasing power system stress.”

Moreover, the nonprofit Energy Systems Integrations Group reports that implementing Biden’s clean energy strategy “will require a doubling or tripling of the size and scale of the nation’s [electric] transmission system.”

It further states, “Decarbonizing the electricity system, and ultimately achieving net-zero emissions, will require action on a transformative scale,” which would involve “massive nation-wide transmission expansion.”

Considering that the U.S. grid is divided into three major regions—including the Eastern, Western, and Texas Interconnection, as well as independent operators at the state and regional levels—moving to a nationwide electric transmission system would be transformative.