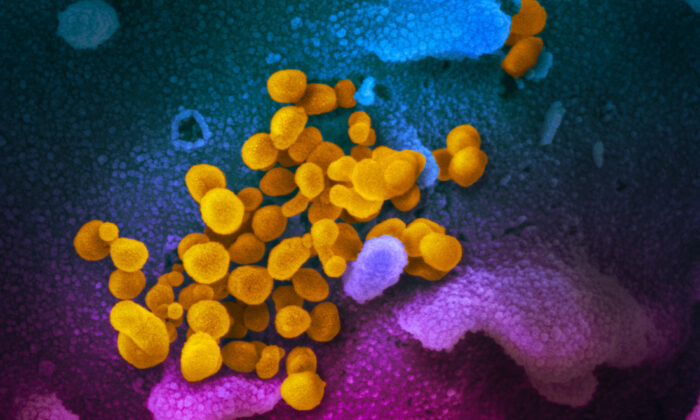 This scanning electron microscope image, published on Feb. 13, 2020, shows SARS-CoV-2 (yellow)—also known as 2019-nCoV, the virus that causes COVID-19—isolated from a patient in the United States, emerging from the surface of cells (blue/pink) cultured in the lab. (NIAID-RML)
Health

An arm of one of the largest clinical trials evaluating drugs against the new disease showed dexamethasone, a steroid, reduced deaths by about 33 percent in patients on ventilators and 20 percent on patients receiving oxygen only.

“The survival benefit is clear and large in those patients who are sick enough to require oxygen treatment, so dexamethasone should now become standard of care in these patients,” Peter Horby, a professor of emerging infectious diseases at University of Oxford, who is helping lead the study, said in a statement.

“Dexamethasone is inexpensive, on the shelf, and can be used immediately to save lives worldwide,” he said.

The preliminary results clearly show that dexamethasone reduces the risk of death among patients with severe respiratory complication, Martin Landray, another Oxford professor who is a chief investigator for the trial, added.

No improvement was seen among patients who didn’t require ventilation or oxygen.

A total of 2,104 patients were randomized to receive six milligrams of the steroid and results were compared with a group of 4,321 patients who received standard care.

Because researchers feel the results were clear, they put out word without full details. The team said it is working to publish the details “as soon as possible.”

Horby and Landray are helping lead the recovery trial, which was initiated in March to test a range of drugs that could be effective against COVID-19, the disease caused by the CCP (Chinese Communist Party) virus.

While many experts touted the results published Tuesday, others urged caution, noting that two papers were recently retracted after impacting COVID-19 trials around the world.

Dr. Ashish Jha, director of Harvard’s Global Health Institute, called it “frustrating” that a press release, not a pre-print paper, was the avenue for releasing results.

“We need to see the full results. But if this holds up—this is very good news indeed!” he added in a social media statement.

Researchers for the trial said earlier this month that another arm found no benefit in using hydroxychloroquine, an anti-malarial drug, against COVID-19 patients. They released preliminary results and said they were not enrolling participants in the arm, effective immediately.

The trial is funded by the University of Oxford, the Bill and Melinda Gates Foundation, and several other agencies and groups.

It involves arms across hospitals in England, Scotland, Wales, and Northern Ireland.