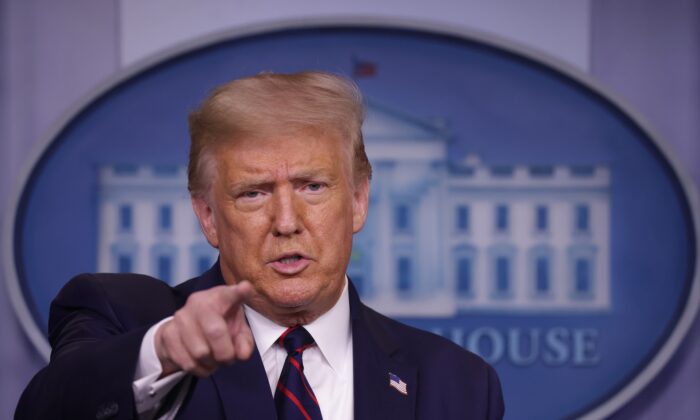 President Donald Trump speaks during a news conference in the James Brady Briefing Room of the White House in Washington on July 30, 2020. (Alex Wong/Getty Images)
Viewpoints

Why Trump Was Right About Postponing the Election

When Donald Trump tweeted early Thursday morning a suggestion that this November’s presidential election be postponed, the internet (predictably) lit up like Times Square at New Years.

Never mind that the president ended his tweet with three question marks, apparently to emphasize that this was only a possibility for consideration given a variety of circumstances. Hardly anyone took it that way.

Many assumed Trump did this because there had just been a terrible economic report that would be blamed on him even if it wasn’t his fault. The tweet was an act of desperation—he was terrified of losing.

The chorus of critics, many of them conservatives who had been supporting him all along, was practically uniform. Some, smarties with legal degrees, went so far as to ridicule him for being so ignorant even to imply he had the power to do such a thing. (He never said he did.)

This, finally, was the end. DJT was being given the door.

I admit I too had a sinking feeling only moments after awakening that morning to see the alert on my iPhone. How could he have been that stupid? This time Trump was toast.

My wife, a smartie without a legal degree, reminded me of how many times I had felt that before, but I paid little heed for several hours.

But then it occurred to me that, as often is the case, there was a method to the president’s supposed madness, even if the timing and/or the rhetoric left something to be desired.

Now before I go further let me acknowledge that such a postponement happening is about as remote as Alpha Centauri, but somebody wrote a column a few days ago for Politico imagining Trump was about to resign, which is equally unlikely, so indulge me.

Three parties, not just one, would stand to gain from a postponement of presidential election 2020: Trump (of course—he could regroup and wait for the economy to come back), the Democratic Party (they could regroup themselves and choose a candidate who could string two sentences together and might actually be able to serve two terms) and the American public itself (that has been having something close to a nervous breakdown during a pandemic and needs a breather, not an election).

Let’s examine the third, and most important one, first.

Life in this country in this anno horrobilis 2020 has been the worst since World War II and in many ways more dispiriting and depressing because, with patriotism in disrepute, citizen has been driven against citizen, neighbor against neighbor, family member against family member.

Then we had a cause, now we have nothing but hate.

The pandemic has brought many ugly critters from under the rocks and encouraged leaders to lie to themselves for the sake of political power in unprecedented manners.

Surely, the governors of Minnesota, Michigan, Oregon, Washington, New York, California and on and on would have behaved differently had the violence broken out in their cities during an Obama administration.

Surely, schools would be opening this August and September with less yelling and screaming by the teachers unions and their allies. (If you want China to rule the world, keep American schools closed.)

We want our sports back, our social life, our religious life, just some degree of normality.

On top of which, an election now, because it is likely to be close, would never be decided in a way satisfactory to both sides.

The 2016 election was never accepted. The moment Trump was elected, he was declared illegitimate by the other side. The Washington Post was trying to impeach him twenty minutes in.

The election of 2020, given the current atmosphere, will be even worse—whoever wins.

That alone is an argument for postponement.

And not just because of voting irregularities, which could be extensive, but due to the temper of the times. We need a cooling off period. Bad.

This could be accomplished by deducting whatever it takes to cool (one year?) from Trump’s second term should he win or by adding that year to a Democrat should he or she win.

Which leads to the Democrats.

Joe Biden is not a real candidate. He’s an accident, a mannequin for “Not Trump” that was erected in a hurry because no one had succeeded in genuinely winning the Democratic nomination.

This happened because the Democrats are two parties—the old center-left one and the growing left-left one. They need to resolve this not only to win, but to govern. For this, they could use some time off.

Should the Democrats win this November, as I wrote earlier, it will be worse for them than losing. You think Antifa and BLM will go away? The violence will not disappear, it will increase. (Remember the Chicago Convention of 1968? Who were they protesting?)

What’s next, the Washington Monument?

Imagine Biden, a man who thinks Arizona is a city—maybe he mixed it up with the Coen Brothers’ “Raising Arizona”—dealing with that.

As I said, they could use some time off.

And Trump? Things are looking a smidge better for him today—the stock markets up and there are no major calamities, at least as of 5PM CT—but you can bet there are one or six right around the corner.

He too could use a personal cooling off period.

Given that universities like Notre Dame are already demurring about holding previously scheduled debates at their venues because of (they say) “the pandemic,” it looks as if we’re not going to have a real election anyway.

Lincoln-Douglas or anything like it is certainly not on the horizon if Biden or his handlers have anything to say about it.

So why bother? We’re already not having a real election. Why not make it official?