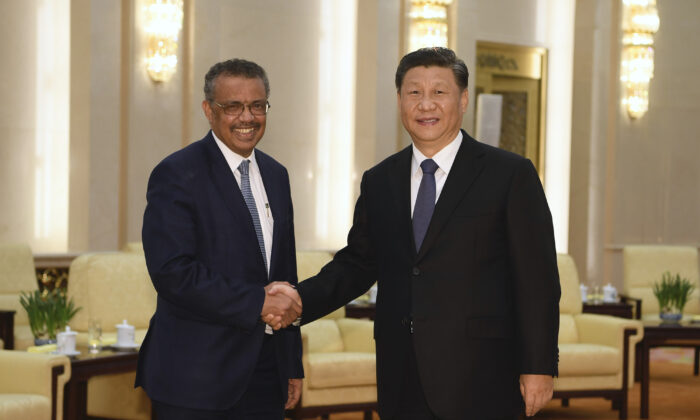 On Sept. 12, 2019, the Wuhan Institute of Virology’s database of viral sequences was taken offline. The deleted database, which has never been publicly recovered, contained more than 22,000 unpublished samples and sequences of bat and rodent viruses.

Notably, the database contains crucial data and may hold the key to determining whether the lab in Wuhan, China, had COVID-19 or a progenitor virus in its possession.

The importance of having access to virus sequence data was illustrated earlier this year, when sequences from early COVID-19 cases were recovered from another dataset that had been deleted in June 2020 from a National Institutes of Health (NIH) database at the behest of a Chinese researcher. That data confirmed that the pandemic didn’t start at the Huanan Seafood Market as Chinese authorities had claimed.

Despite the potential importance of the Wuhan Institute of Virology (WIV) data, there have been no known requests from public health officials to reinstate or examine the Institute’s database and none of the major health officials and experts involved in the pandemic response, such as Dr. Anthony Fauci, British pharmaceutical trust Director Jeremy Farrar or NIH Director Dr. Francis Collins, have publicly acknowledged the database’s existence.

In February, the World Health Organization (WHO) sent an investigative team to Wuhan. The team’s report states that as part of their analysis they “reviewed data collected through the China National Centre for Bioinformation integrated database on all available coronaviruses sequences.”

But the team failed to request an examination of the database of viruses collected, maintained, and later deleted by the WIV. The WHO’s failure to pursue what could have been its most promising investigative lead is notable as the Wuhan Institute of Virology is widely regarded as perhaps the most likely source of a viral lab leak.

Peter Daszak, the president of EcoHealth Alliance, a group used by Fauci’s NIH to fund the Wuhan Institute lab, claimed that the WHO’s investigative team didn’t request to see the deleted Wuhan database because Daszak told them that the data didn’t contain relevant information on the pandemic’s origins.

It seems surprising that WHO officials would accept Daszak’s assertions at face value, rather than insisting upon examining the database for themselves. It’s also worth noting that Daszak was inherently conflicted as he had been enmeshed with the WIV’s activities for years.

When asked about the deleted database in January, WIV Director Shi Zhengli claimed that she deleted the database because of alleged hacking attempts—despite the fact that this information was supposed to be publicly available, according to Daszak’s funding agreement with Fauci’s NIH.

The WHO’s failure to examine the Wuhan Institute’s database also is surprising in light of a September 2019 WHO report that specifically warned of the possibility of a pandemic.

That report, which stated that “the world is not prepared for a fast-moving, virulent respiratory pathogen pandemic,” was published six days after the Wuhan Institute deleted its entire database of dangerous pathogens.

There’s no suggestion that the authors of the WHO report had foreknowledge of the viral outbreak, since it was based on a Sept. 10, 2019, John Hopkins study. But the fact that the WHO’s September report warned of the potential for a global viral outbreak at the same time that the Wuhan Institute deleted all its dangerous pathogen data should have caught the WHO’s immediate attention.

The timing of the Institute’s decision to remove the database of virus sequences is notable in light of events that followed the database’s deletion.

According to a Harvard Medical School study, an increase in traffic at hospitals throughout Wuhan took place in October 2019.

John Brownstein, the Harvard medical professor who led the research, told ABC that “something was happening in October … clearly, there was some level of social disruption taking place well before what was previously identified as the start of the novel coronavirus pandemic.”

The Harvard study appears to have been validated through the observations of the U.S. consul general in Wuhan, Russell Westergard, who is on record as stating that by mid-October 2019, the U.S. Consulate in Wuhan “knew that the city had been struck by what was thought to be an unusually vicious flu season.”

Westergard would later note that “the disease worsened in November.”

Westergard also stated that when Wuhan city officials began to close public schools in mid-December 2019 to control the spread of the disease, his team passed the information to the U.S. Embassy in Beijing while they continued to monitor the situation.

Around the same time that Westergard was raising his warnings, likely at some point in early November 2019, three WIV lab workers were reportedly hospitalized with COVID-like symptoms.

Additionally, Huang Yanling, a researcher at the Wuhan Institute of Virology who has been rumored to be patient zero, also appears to have disappeared during this time frame. Her profile was subsequently scrubbed from the Wuhan Institute’s website.

The annex to the WHO’s 2021 investigative report—which describes Huang as a former lab worker—notes that according to the Wuhan Institute of Virology staff, Huang was an alumnus who graduated in 2015 and was working in a different province. But Huang’s profile on the Institute’s website remained active until after the pandemic outbreak. And Huang can also be seen in a 2018 Wuhan Institute group photo.

In November 2019, warnings began to sound in Washington. According to an April 8, 2020, report by ABC News, U.S. intelligence officials were warning in late November 2019 that “a contagion was sweeping through China’s Wuhan region.”

ABC News also stated that a November 2019 intelligence report by the military’s National Center for Medical Intelligence (NCMI) had stated that the contagion in Wuhan “could be a cataclysmic event.”

Notably, NCMI would later be identified by French media as the agency that had concluded that the virus most likely leaked out of a Wuhan lab in the 2021 Intelligence Community Assessment on the virus’s origins.

Unsurprisingly, there has been significant debate and conflicting information as to when the COVID outbreak first began. One report, which cited Chinese government officials, noted that the first case could be traced back to Nov. 17, 2019.

A detailed academic report in The Lancet claimed that the first known COVID case occurred on Dec. 1, 2019, and noted that the patient had no known ties to the Huanan Seafood Market.

These earlier dates contrast with the WHO’s first officially stated date for an individual becoming ill with COVID on Dec. 8, 2019.

As the outbreak in Wuhan appeared to be reaching a critical juncture, the Wuhan Center for Disease Control and Prevention (CDC) suddenly moved its lab’s location on Dec. 2, to a spot just a few hundred yards from the Huanan Seafood Market.

While this lab has received little, if any, media attention, the WHO’s lead investigator into the virus’s origins, Peter Ben Embarek, privately voiced his concerns about this facility to a Danish documentary crew.

The Wuhan CDC kept the sudden move of its lab quiet and away from media attention. Embarek claims he only became aware of the move after he noticed that as he was being shown around the Wuhan CDC lab’s facilities, everything appeared to be new.

The WHO’s report, which contained only a single reference to the Wuhan CDC lab, noted, “Such moves can be disruptive for the operations of any laboratory” and stated that the lab “reported no storage nor laboratory activities on CoVs or other bat viruses preceding the outbreak.”

However, the WHO’s statement regarding the Wuhan CDC’s activities is at odds with the activities of the lab’s resident coronavirus researcher, Tian Junhua.

In 2017, Tian bragged to a Chinese newspaper that he had personally captured 10,000 bats in remote caves in southern China before bringing them back to his Wuhan CDC lab.

Tian also is well-known in academic circles for his research on bat coronaviruses and has co-published at least 14 scientific articles with Edward Holmes, a WHO-affiliated scientist and natural-origins proponent with long-standing ties to China.

The deletion of the WIV’s database along with other evidence, including the observations of the U.S. Consulate in Wuhan, would seem to suggest that the outbreak in Wuhan began earlier than has been generally reported.

This raises questions as to why the WHO failed to give this information serious consideration in the preparation of its report on the origins and timing of the virus.