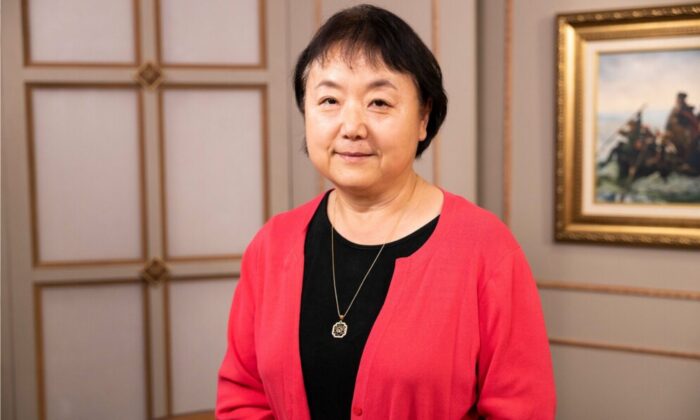 The communist political movement that devastated China decades ago is unfolding in America, warned Xi Van Fleet, a parent-turned-activist who made national headlines after speaking out against critical race theory (CRT) at a school board meeting.

“When the Cultural Revolution started, I was a first grader,” the Virginia mother told EpochTV’s “American Thought Leaders.” She said that all classes ceased at schools and colleges as older students proclaimed themselves Mao Zedong’s Red Guards.

Emboldened by Mao’s slogan “To Rebel is Justified,” the Red Guards did not hesitate to instigate violence and destruction on everyone and everything they considered “counter-revolutionary.”

"We see little girls…going to social media denouncing their parents as racist."

It's like in #China during Mao's Cultural Revolution, says Xi Van Fleet. "Everyone was encouraged to report on everyone else, including your parents."

“With Mao’s approval, no one could stop them,” said Van Fleet, recalling a story she heard from someone who witnessed the Red Guards beating to death a man, who was deemed an “oppressor” and “exploiter” for simply being able to withdraw a large sum of money from his bank. The perpetrators faced no consequences for the killing, since the criminal justice system was already paralyzed.

Another key feature of the Red Guards movement was to attack the “Four Olds,” namely “old ideas, old culture, old customs, and old habits.” To enforce what Van Fleet described as a “cancel culture,” the Red Guards would go door to door to search and destroy any item that was connected to the period before the communist takeover of China.

“I remember this whole street was just a mess of things destroyed, and the people, those homeowners, howling and crying,” she said.

While the madness and lawlessness of Mao’s Cultural Revolution may sound extreme to Americans, Van Fleet warns that America is following a similar path.

“One of the things that I noticed is people are afraid,” she said. “There is the right way to talk. There are the right ideas, and those who don’t share it feel like, if they tell their own opinion, they might run the risk of being considered racist—a word like China’s ‘counter-revolution.'”

The term “racism,” much like the vaguely defined “counter-revolution,” no longer means anything but serves as a political weapon, according to Van Fleet. “For the longest time, my understanding of racism is that someone who discriminates someone else based on the race,” she said. “But in the last few years it has changed its meaning. Anyone who kind of disagrees with the the ideology from the left becomes a racist.”

During the Cultural Revolution, the term “historical counter-revolution” was used to criminalize people for what they did or said in the past. Van Fleet said there is also an American version of it.

“In Virginia, Gov. [Ralph] Northam was called today a racist, because in the past, when he was in college, he wore blackface,” she said. “That is the equivalent of Chinese historical counter-revolutionary.”

In Mao’s China, citizens were classified into the favored “Five Red Categories” and the undesirable “Five Black Categories” based on their political identities. Descendants of members of the latter group, which included rich farmers and other “class enemies,” were routinely humiliated and forced to go to “struggle sessions” where they were made to confess their privileged status. Van Fleet said this echoes with what advocates of CRT push to Americans and their children.

“Does that remind us of CRT?” she said. “[According to CRT] if you are born white, you are an oppressor; if you’re born black, you’re oppressed, and as oppressed people, you have no hope in this oppressive society.”

“That’s the most effective way to divide people, and that’s from the Marxist playbook to divide,” she continued, pointing out that CRT is Marxist class struggle rhetoric repackaged to focus on race so that it works better in American society. “And then they have gender, sexuality, and intersectionality—all of these are tools to divide and they are rooted in cultural Marxism. Mao used that, the [American] left is using it now.”

“What’s happened here in America is nothing new,” she said. “It happened in China, it happened to me. If we let it go, and not stopping it, [we] will have the same result. The result of the Cultural Revolution is the total destruction of the society, and that’s what awaits us if we don’t stop it.”