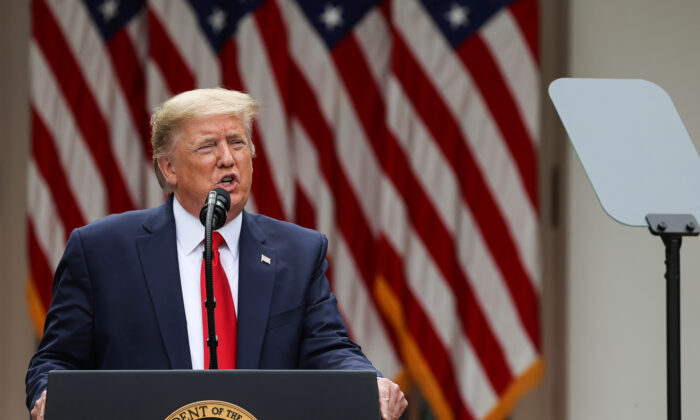 President Donald Trump addresses a news conference on China in the Rose Garden of the White House in Washington, on May 29, 2020. (Jonathan Ernst/Reuters)
China-US News

The move came a day after Beijing pressed ahead with enacting a national security law in Hong Kong, a move that critics said could endanger Hong Kong’s status as a global financial hub.

The United States previously treated Hong Kong as a separate entity from mainland China in the areas of trade, investment, and immigration, and has meant that current U.S. tariffs on billions of dollars worth of Chinese goods do not apply to Hong Kong.

At a White House press conference on China policies, Trump said that he will revoke Hong Kong’s special status, and will update U.S. travel advisories, “to reflect the increased danger of surveillance and punishment by the Chinese state security apparatus” following the law’s approval.

The administration will also “take necessary steps” to sanction Chinese and Hong Kong officials “directly or indirectly involved in eroding Hong Kong’s autonomy,” he said. The announcement will also impact a range of U.S. agreements with Hong Kong, including export controls, an extradition treaty, and customs.

The former British colony reverted back to Chinese rule in 1997, whereby Beijing promised to retain its autonomy under the “one country, two systems” framework.

“China has replaced its promised formula, ‘one country, two systems,’ with ‘one country, one system,’” Trump said, adding that Beijing’s latest law is “diminishing the city’s long-standing and very proud status.”

Two days ago, secretary of State Mike Pompeo declared that Hong Kong was no longer sufficiently autonomous from mainland China to justify its special treatment under U.S. law, but formally revoking Hong Kong’s special privileges requires an executive order by the president.

While much of the bill’s specifics will be rolled out in the coming months, the draft resolution aims to target any activities the regime deems as “secession, subversion, infiltration, or sabotage.” It would also enable central authorities to send security agencies to Hong Kong.

In the latest assertion of Beijing’s authority, Zhao Kezhi, head of China’s Ministry of Public Security, vowed to “fully direct and support Hong Kong police” to “maintain Hong Kong’s safety and stability” at a political conference on Friday.

Hong Kong’s pro-Beijing government on Thursday night expressed “strong opposition” to the United States’ decision to strip Hong Kong of special economic benefits that distinguish the city from mainland China, warning that the sanctions could backfire.

“Any sanctions are a double-edged sword that will not only harm the interests of Hong Kong but also significantly those of the U.S.,” a Hong Kong government spokesperson said in a press release.

“Chinese government’s resolve to oppose any foreign forces interfering with Hong Kong affairs will not be shaken,” he said, adding that Beijing has “fulfilled all rights and obligations” under the Sino-British Joint Declaration, a treaty signed in 1984 to lay out Hong Kong’s future upon its return to Chinese sovereignty.

For two days in a row, long lines have formed at Hong Kong banks as locals rushed to convert their savings into U.S. dollars.

Popular sentiment seemed to swing in the opposite direction. A poll by the protester-founded Citizens’ Press Conference found that among 370,000 respondents, 98.6 percent opposed the Chinese law, with a majority expressing fears that Chinese police could take over Hong Kong. Three quarters of those surveyed also agreed that the measure would not discourage pro-democracy protesters from returning to the streets.

Prominent Hong Kong democracy activist and founder of local newspaper Apple Daily Jimmy Lai—whom Beijing has hinted could be a target under the new law—has vowed to “fight on til the last day.”

“There’s no other way but to fight on,” he told Reuters on Friday. “If I can sacrifice for Hong Kong, I would do so. This is my home … It will be (an) honour if I become a sacrifice. It will be my honor.”

Taiwan and the U.K. have pledged to help Hongkongers resettle if the Chinese regime continues to close in on Hong Kong. Some U.S. officials are also calling for Hong Kong citizens to be granted refugee status.

Lo Kin-hei, vice chairman of Hong Kong’s Democratic Party, said citizens are ready to embrace the impending economic pain for the sake of defending their rights.

“I think HKers believes [sic] that HK can only survive in the Phoenix way—die and reborn. What if we couldn’t [be] reborn? Everyone dies,” he wrote on Twitter a day prior.