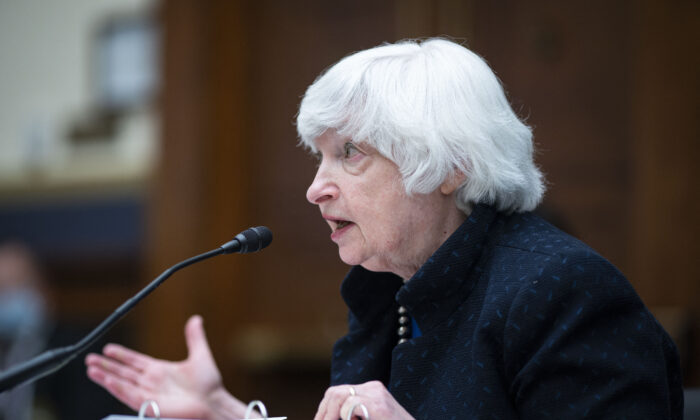 Yellen “frankly raised issues of concern,” the U.S. Treasury announced in a short statement without elaborating on what the issues were. The statement did add that the two discussed “macroeconomic and financial developments” in both nations.

According to a Chinese readout from the Ministry of Commerce, Liu expressed concerns during the virtual meeting over U.S. tariffs and sanctions, as well as the U.S. treatment of Chinese companies. The ministry described the bilateral discussion as “pragmatic, candid, and constructive.”

The talks occurred less than a month after Liu held an online meeting with U.S. Trade Representative Katherine Tai. During that conversation, which took place on Oct. 9, Liu pushed Tai to cancel U.S. tariffs, while the two sides “reviewed implementation of the U.S.–China Economic and Trade Agreement.”

The phase one trade deal, signed during the Trump administration in January 2020, required China to buy at least $200 billion worth of additional U.S. goods and services over the following two years. According to analysts from the Washington-based Peterson Institute for International Economics, China didn’t fulfill its purchase commitments in 2020 and met about 69 percent through the first eight months of this year.

A few hours after Yellen and Liu talked, China’s hawkish state-run outlet Global Times published its own analysis, saying that it was the U.S. side that was “eager to engage” China, since the talk took place “after working hours” in the United States.

The article also claimed that “it is expected” that Washington would cancel the tariffs on Chinese goods, arguing that the tariffs could be “abolished in an indirect way,” such as exemptions.

Antonio Graceffo, an economics professor and China economic analyst, in his analysis for The Epoch Times on Oct. 19, stated that U.S. tariffs “have punched a tremendous hole in the Chinese economy.”

“Tariffs and other restrictions against China will deny the CCP [Chinese Communist Party] the money it needs to modernize its military, while also protecting U.S. jobs and securing U.S. national defense by reducing U.S. dependence on foreign supply chains,” he said.

On Oct. 4, Tai delivered a major policy address on Sino–U.S. economic ties at the Washington-based think tank Center for Strategic and International Studies. During her speech, she said that Washington would start a “targeted tariff exclusion process” to exempt some Chinese imports from punitive U.S. tariffs while pressing Beijing over its failure to keep its promises under the phase one trade agreement.

The day after her speech, at least two U.S. lawmakers expressed concerns about the Biden administration’s trade policy on China.

“Ambassador Tai’s speech accurately observed the zero-sum nature of the CCP’s industrial policies and limited prospect for structural economic reform in China,” stated Rep. Michael McCaul (R-Texas), the ranking Republican on the House Foreign Affairs Committee, according to a statement. “However, after many months of waiting for the Biden administration’s China trade policy, there still appears to be no plan to counteract or insulate our economy from the increasingly antagonistic and damaging trade policies pouring out of China.”

Rep. Kevin Brady (R-Texas), the top Republican on the House Ways and Means Committee, said the Biden administration should move on to phase two negotiations, according to a statement from his office.

“We could better confront China by proceeding to phase two negotiations, or through high-standard new trade agreements that strengthen economic partnerships with our allies,” he said.

The Trump administration originally wanted to hold phase two talks with Beijing to tackle more challenging issues such as China’s use of state subsidies to support state-run companies. The talks never materialized.