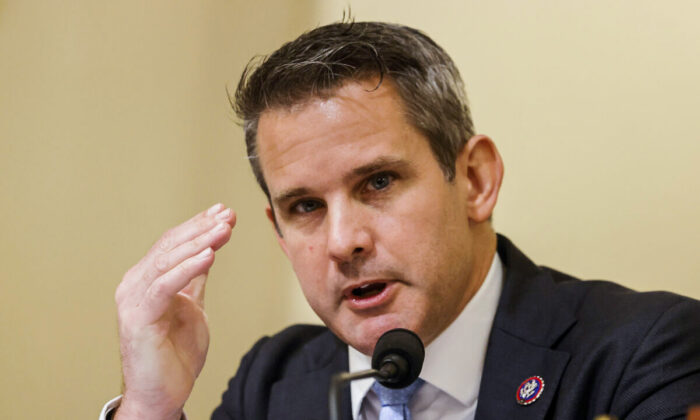 U.S. Representative Adam Kinzinger (R-Ill.) speaks during the opening hearing of the U.S. House (Select) Committee investigating the Jan. 6 attack on the U.S. Capitol on July 27, 2021 at the Cannon House Office Building in Washington. Members of law enforcement testified about the attack by supporters of former President Donald Trump on the U.S. Capitol. According to authorities, about 140 police officers were injured when they were trampled, had objects thrown at them, and sprayed with chemical irritants during the insurrection. (Photo by Jim Bourg-Pool/Getty Images)
Americas

US Should Secure Freedom of Missionaries in Haiti Without Ransom: Rep. Kinzinger

The United States should seek to free abducted missionaries in Haiti without ransom, Rep. Adam Kinzinger (R-Ill.) said on Oct. 17, shortly after a U.S. Christian aid organization said a group of its missionaries had been kidnapped in the Caribbean nation.

The Illinois Republican told CNN that the United States must find the group and see if it can negotiate a release without paying a ransom or that it should use the military or police to secure their freedom.

“We need to track down where they are and see if negotiations—without paying ransom—are possible. Or do whatever we need to do, on a military front or a police front,” said Kinzinger, who sits on the House Foreign Affairs Committee.

The kidnapping comes after the Ohio-based Christian Aid Ministries stated in a message sent to several religious missions that as many as 17 U.S. missionaries, including women and children, had been kidnapped in the Ganthier commune over the weekend while they were on their way home from building an orphanage.

“This is a special prayer alert,” the ministry wrote on WhatsApp. “Pray that the gang members would come to repentance.”

The message also states that women, children, and some elderly people were among those kidnapped.

Haitian police inspector Frantz Champagne told The Associated Press that the group was kidnapped by the 400 Mawozo gang, which translates to 400 “inexperienced men.” According to authorities, the gang controls the Croix-des-Bouquets area and carries out kidnappings and carjackings.

According to accounts by other missionaries, the group’s bus was hijacked.

The U.S. State Department told media outlets in a statement that it was aware of the kidnapping reports.

“The welfare and safety of U.S. citizens abroad is one of the highest priorities of the Department of State,” a State Department spokesperson said in a statement, without offering additional comment.

“We are seeking God’s direction for a resolution, and authorities are seeking ways to help,” Christian Aid Ministries said in a statement.

Kidnappings have been on the rise for months in Haiti as the impoverished country’s economy worsens, although the abduction of foreigners is relatively rare. Victims generally come from the Haitian middle class—teachers, priests, civil servants, and small business owners—who can’t afford bodyguards, but can scrape together a ransom.

The State Department currently lists Haiti as a “do not travel” country, noting high crime, kidnappings, civil unrest, and COVID-19.

“Kidnapping is widespread and victims regularly include U.S. citizens,” the agency’s website reads. “Kidnappers may use sophisticated planning or take advantage of unplanned opportunities, and even convoys have been attacked.