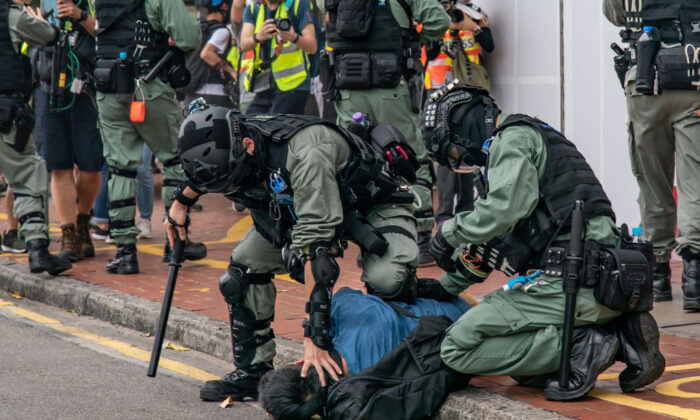 A pro-democracy supporter is detained by riot police during a protest in Hong Kong on May 24, 2020. (Anthony Kwan/Getty Images)
China-US News

Sen. Ben Sasse (R-Neb.) has announced a plan to introduce new legislation this week to automatically grant asylum to people in Hong Kong.

“The Chinese Communist Party’s willingness to break its treaty obligations on Hong Kong shows the world that Beijing cannot be trusted to honor any agreements,” said Sasse, a member of the Senate Select Committee on Intelligence, in a May 30 press release from his office.

A day after the NPC’s decision, President Donald Trump announced decisions to curtail ties with Hong Kong, with plans to adopt measures such as revoking Hong Kong’s special trading status with the United States and imposing sanctions on Hong Kong and Chinese officials “directly or indirectly involved in eroding Hong Kong’s autonomy.”

Secretary of State Mike Pompeo, speaking to Fox News on Sunday, said that he had been told by Trump to “review every preferential treatment that Hong Kong had and work to eliminate it.”

Currently, Hong Kong enjoys multiple special treatments not available to China under U.S. law. According to a May 29 briefing by the U.S.-China Economic and Security Review Commission (USCC), these treatments include recognizing Hong Kong as a separate customs territory with differentiated terms of access to U.S. exports of sensitive technologies.

Early last week, Pompeo certified that Hong Kong is no longer autonomous from China while reporting to Congress for its annual review under the Hong Kong Human Rights and Democracy Act of 2019.

“Victims of communism will always find refuge in the United States,” Sasse added. “The brave Hong Kongers who have stared down the threat of communist oppression will find safety here until their home is free.”

The press release does not outline what kind of documentation will be needed by Hongkongers to claim asylum in the United States.

Since the start of Hong Kong’s mass protests last June, Hong Kong police have arrested over 8,000 people. There have been many instances in which Hong Kong protesters and journalists were victims of police violence.

As of February, police have fired 16,191 tear gas rounds, 10,100 rubber bullets, 2,033 bean bag rounds, and used 1,491 bottles of pepper spray, to disperse protesters, according to a report by the city’s police watchdog. The watchdog, the Independent Police Complaints Council, has been criticized by the UN Human Rights Committee for a lack of independence, as its members are appointed by Hong Kong’s Chief Executive. The body has no investigative powers and cannot call on or protect its own witnesses.

Paris-based NGO, Reporters Without Borders (RSF), warned on May 26 that the national security law will endanger press freedom in Hong Kong.

“National security is the pretext that the Chinese authorities most often use to justify imprisoning journalists in conditions that pose a threat to their lives, sometimes even going so far as to impose a life sentence,” said Cédric Alviani, the head of RSF’s East Asia bureau.

“I am proud to stand with them as they fight to provide a broad platform for unions, civil and human rights organizations, and other allies to coordinate and advance an agenda for democracy and fundamental worker and human rights,” said AFL-CIO President Richard Trumka in a press release.

Trumka called on the pro-Beijing Hong Kong government to drop charges against 15 democracy activists, among them CHRF’s deputy convenor Figo Chan, who were arrested in April.

CHRF, in a May 31 statement, said that the award belonged to all those who have taken part in the ongoing protest for basic freedoms in the city.

“I hope everyone will continue to work hard in the future, to continue our calls for the five demands, and oppose the national security law,” CHRF stated. The five demands include an independent inquiry into police violence and universal suffrage.