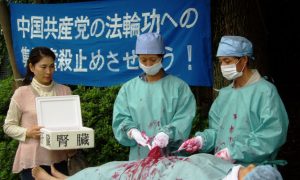 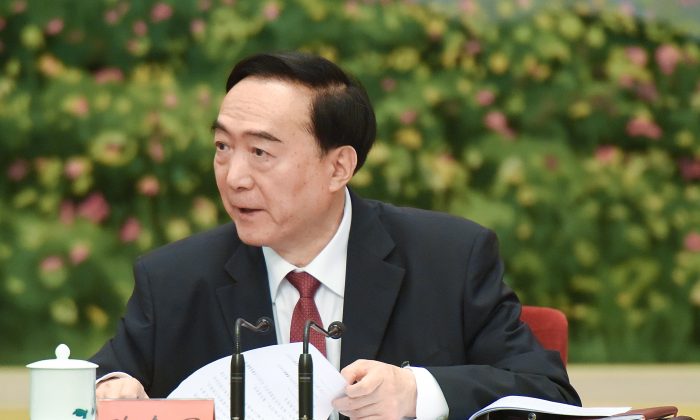 Chen Quanguo, CCP secretary of Xinjiang, attends a meeting of the 19th Communist Party Congress at the Great Hall of the People on October 19, 2017 in Beijing, China. Chen developed the so-called “vocational education centres” that detains million of Uighurs and other Muslim minorities. (Etienne Oliveau/Getty Images)
China-US News

WASHINGTON—The United States imposed sanctions on Chinese officials on July 9, including a member of the Chinese Communist Party (CCP)’s powerful Politburo, accusing them of serious human rights abuses against Uyghur Muslim minorities, a move likely to further ratchet up tensions between Washington and Beijing.

The Trump administration targeted the Xinjiang region’s Party Secretary Chen Quanguo, who became the highest-ranking Chinese official to be hit with U.S. sanctions, and the Xinjiang Public Security Bureau (akin to police force). The move comes amid already-high tensions between Washington and Beijing over China’s handling of the coronavirus pandemic and its tightened grip on Hong Kong.

“The United States calls upon the world to stand against the CCP’s acts against its own minority communities in Xinjiang, including mass arbitrary detention, forced labor, religious persecution, and forced birth control, and sterilization,” a White House official said.

The United Nations estimates that more than a million Uyghur Muslims have been detained in internment camps in the Xinjiang region. Survivors of the internment camps said they experienced torture, rape, and political indoctrination while detained. Uyghur detainees were pressured to suppress their native culture and language, and forced to denounce their faith and pledge loyalty to the CCP.

The sanctions are imposed under the Global Magnitsky Act, a federal law that allows the U.S. government to target human rights violators around the world with freezes on any U.S. assets, U.S. travel bans, and prohibitions on Americans doing business with them.

The Chinese Embassy in Washington didn’t immediately respond to a request for comment.

China has continually denied mistreatment of the minority group and claims the camps provide vocational training and are needed to fight extremism.

The CCP has used the excuse of potential “extremist threats” to justify its strict surveillance of Uyghurs and other Muslim minority groups in the Xinjiang region.

U.S. Secretary of State Mike Pompeo in a statement said he was also imposing further visa restrictions on Chen, Zhu, and Wang, barring them and their immediate family from the United States.

The U.S. Treasury Department said that Chen, the highest-ranking Chinese official to be hit with sanctions, implemented “a comprehensive surveillance, detention, and indoctrination program in Xinjiang, targeting Uyghurs and other ethnic minorities” through the Xinjiang Public Security Bureau.

Chen made his mark swiftly after taking the top post in Xinjiang in 2016, with mass “anti-terror” rallies conducted in the region’s largest cities involving tens of thousands of paramilitary troops and police. He is widely considered the senior official responsible for the suppression of Uyghurs in Xinjiang.

In October 2019, the State Department announced visa restrictions on Party officials it believed were responsible for abuses in Xinjiang, but didn’t say if they included Chen.

China threatened retaliation after U.S. President Donald Trump signed a bill into law in June that stipulates sanctions over the repression of Uyghurs.

“The United States is committed to using the full breadth of its financial powers to hold human rights abusers accountable in Xinjiang and across the world,” Treasury Secretary Steven Mnuchin said in a statement.