'Pervasive and Aggressive': How the Chinese Regime Has Extended Its Persecution of Falun Gong Into Canada for 21 Years
0
Share Now
TelegramFacebookTweetEmailTellMeWeReddit
Copy Link 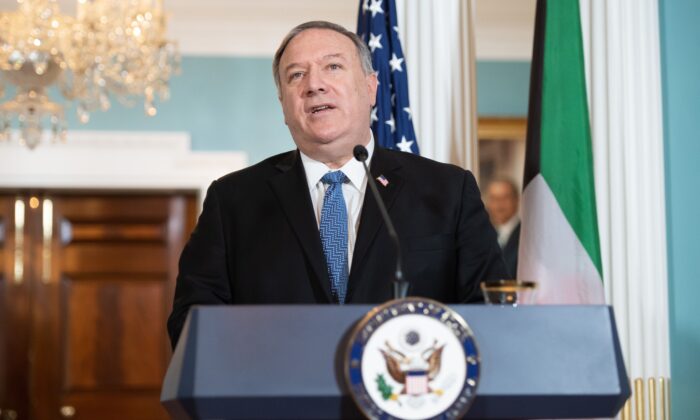 Secretary of State Mike Pompeo speaks to the press prior to meeting with the Kuwaiti Foreign Minister, at the State Department in Washington on Nov. 24, 2020. (Saul Loeb/POOL/AFP via Getty Images)
US-China Relations

Cathy He
CHINA EDITOR
Cathy He is a New York-based reporter focusing on China-related topics. She previously worked as a government lawyer in Australia. She joined the Epoch Times in February 2018.
View profile
Follow
and Eva Fu

The Trump administration on Dec. 10 sanctioned a Chinese official for his involvement in “gross human rights violations” against practitioners of Falun Gong—a spiritual practice persecuted by the Chinese Communist Party (CCP) since 1999.

The sanction, made on International Human Rights Day, marks the first time the United States has punished a CCP official over his or her role in persecuting adherents of Falun Gong.

Huang was among 17 foreign officials sanctioned by the State Department on Dec. 10 under section 7031(c) of the Department of State, Foreign Operations, and Related Programs Appropriations Act 2020 for significant violations of human rights. Such designations are made when the state secretary has “credible information that officials of foreign governments have been involved in a gross violation of human rights or significant corruption,” according to the statement.

Falun Gong (also known as Falun Dafa) is a spiritual practice that has been brutally persecuted by the Chinese regime for more than two decades.

The practice, composed of meditative exercises and a set of teachings centered on the principles of truthfulness, compassion, and tolerance, grew in popularity in the 1990s, with 70 million to 100 million adherents in China by the end of the decade, according to official estimates at the time. Threatened by its popularity, the CCP launched a systematic elimination campaign against the practice, utilizing the entire state apparatus.

Since then, millions have been detained inside prisons, labor camps, and other facilities, with hundreds of thousands tortured while incarcerated, according to the Falun Dafa Information Center. There are more than 4,000 documented deaths resulting from the persecution, though experts say the true figure is likely much higher due to the extreme difficulty in verifying information from communist China. In addition, independent experts have found that Beijing has killed imprisoned practitioners to sell their organs on the transplant market.

“The world cannot stand idly by as the PRC [People’s Republic of China] government perpetrates horrific and systematic abuses against people in China, including violating the internationally recognized right to freedom of thought, conscience, and religion or belief,” Pompeo said.

Levi Browde, executive director of the Falun Dafa Information Center, applauded the administration’s move, which he said “holds individuals accountable for the systematic detention, torture, and killing of people who practice Falun Gong in China.”

“Tens of millions of people throughout China practice Falun Gong, and many are suffering ongoing abuses at the hands of Chinese officials,” Browde said in a statement to The Epoch Times. “We will continue our work to document these abuses, so that more officials can be held to account.”

Records from Minghui.org, a clearinghouse for firsthand information about the persecution of Falun Gong in China, show that more than 5,300 Falun Gong practitioners were detained or harassed during the first half of 2020 alone.

Authorities in the province of Fujian have heavily suppressed practitioners. For example, Ye Guohua, a local middle-school teacher, was jailed three times for more than five years over the period of 2002 to 2013, according to Minghui.org. In January 2018, while doing Falun Gong exercises with five fellow practitioners at a friend’s home, the police rushed in and arrested all of them, torturing and interrogating them until 1 a.m. that night. Officers later raided Ye’s home and detained him. Then, in September that year, police suddenly told Ye’s family to bail him out, claiming he had an acute illness and was under emergency rescue.

According to Minghui.org, when the family saw Ye, he was unconscious with swelling all over his body. The doctor, refusing to clarify the illness Ye had, told them that his heart, liver, and kidney had “all gone bad.” Ye died three days later.

The Trump administration has taken an increasingly harder line in response to the CCP’s rampant rights abuses. It has previously sanctioned Chinese officials and blacklisted Chinese companies for their role in suppressing Uyghur Muslims in the region of Xinjiang. A growing list of Chinese and Hong Kong officials have also been sanctioned for overseeing the erosion of freedoms in Hong Kong.

Pompeo said these designations “underscore … the promotion of accountability for gross violators of human rights” and express “the time-honored American aspiration for all people to be free.”