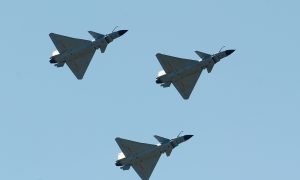 US Revokes Over 1,000 Visas of Chinese Nationals Over Military Links

The United States has revoked more than 1,000 visas of Chinese nationals over military links, a State Department spokesperson said on Wednesday.

“We continue to welcome legitimate students and scholars from China who do not further the Chinese Communist Party’s goals of military dominance,” a department spokesperson told The Epoch Times in a statement.

“As of September 8, 2020, the Department has revoked more than 1,000 visas of PRC nationals who were found to be subject to Presidential Proclamation 10043 and therefore ineligible for a visa. We do not discuss individual cases that are subject to these restrictions. Visa records are confidential under U.S. law.”

The State Department from June 1 began implementing a proclamation issued in late May by President Donald Trump. The proclamation was to limit Beijing’s ability to leverage Chinese graduate students and researchers to steal U.S. technologies, intellectual property, and information to develop advanced military capabilities.

President Trump said on May 29, ahead of the proclamation: “For years, the government of China has conducted illicit espionage to steal our industrial secrets, of which there are many.

“Today, I will issue a proclamation to better secure our nation’s vital university research and to suspend the entry of certain foreign nationals from China who we have identified as potential security risks.”

In particular, the proclamation directs the State Department to consider revoking visas for Chinese nationals “pursuant to an F or J visa to study or conduct research in the United States.”

Trump stated in the proclamation that the entry of such nationals “would be detrimental to the interests of the United States.” The president also said that Beijing is “engaged in a wide‑ranging and heavily resourced campaign to acquire sensitive United States technologies and intellectual property,” which presents a threat to the U.S. economy and national security.

“The PRC authorities use some Chinese students, mostly post‑graduate students and post-doctorate researchers, to operate as non-traditional collectors of intellectual property. Thus, students or researchers from the PRC studying or researching beyond the undergraduate level who are or have been associated with the PLA are at high risk of being exploited or co-opted by the PRC authorities and provide particular cause for concern,” Trump wrote.

Department of Homeland Security Acting Secretary Chad Wolf on Wednesday said in a statement, “China has leveraged every aspect of its country including its economy, its military, and its diplomatic power, demonstrating a rejection of western liberal democracy and continually renewing its commitment to remake the world order in its own authoritarian image.”

Among other actions noted to protect U.S. national security, Wolf said that the United States is “blocking visas for certain Chinese graduate students and researchers with ties to China’s military fusion strategy to prevent them from stealing and otherwise appropriating sensitive research.”

The State Department spokesperson noted that those whose visas have been revoked due to the proclamation represent a “small subset” of the total number of Chinese students and researchers coming into the United States.

He added that the administration is acutely aware of the pressure that Chinese students are subject, being under CCP surveillance while on American soil.

In August, the State Department wrote a letter encouraging U.S. colleges to review their relationships with Chinese-backed Confucius Institutes and to guard against the Chinese regime’s theft of U.S. research.

In the letter to the board of directors of U.S. universities and colleges, Keith Krach, undersecretary for economic growth, energy, and the environment, wrote that the Chinese regime “seeks to exploit America’s openness by implementing a well-financed, whole-of-government campaign to recruit foreign experts through its more than 200 talent recruitment plans including to speed its own efforts at Military-Civil Fusion.”

“As of 2017, China reportedly has recruited 7,000 researchers who focus on or have access to cutting-edge research and technology. For the CCP [Chinese Communist Party], international scientific collaboration is not about advancing science, it is about advancing the PRC national security interests,” he wrote.

The letter came just days after the department designated the Confucius Institute U.S. Center (CIUS) a Chinese diplomatic mission—a move that restricts its operations in the United States.

The Department of Justice (DOJ) has launched a number of prosecutions over the past year targeting Chinese and U.S. researchers who allegedly hid their ties to China, as part of the China Initiative, a large-scale counter-CCP campaign launched in November 2018 by then-Attorney General Jeff Sessions.

FBI director Christopher Wray said the bureau opens a new counterintelligence investigation involving China every 10 hours. The bureau has more than 2,000 active China-related investigations as part of the China Initiative.

Cathy He and Ivan Pentchoukov contributed to this report.