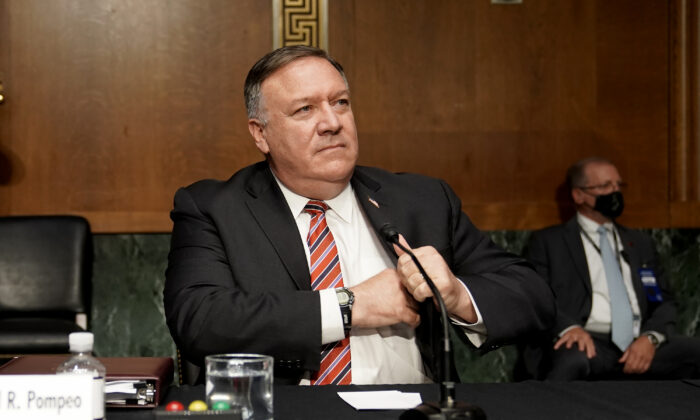 Secretary of State Mike Pompeo said the Trump administration is ramping up efforts to counter Beijing’s expanding influence at international organizations, as part of the United States’ “multi-front” campaign against the Chinese Communist Party (CCP), which he described as the “central threat of our times.”

Pompeo said there’s been “at least a 15-year-long-slide” in U.S. influence in the United Nations (U.N.) system, which has coincided with the CCP’s growing sway.

Chinese officials currently lead four of the 15 U.N. specialized agencies. The Chinese regime has also worked to increase its presence at key U.N. bodies to advance its own interests, according to an April report by the U.S.-China Economic and Security Review Commission.

“We are sadly inadequately represented at every level in these international organizations,” Pompeo said at a Senate Foreign Relations Committee hearing on July 30.

But the administration has been pushing back against Beijing’s actions, he said, citing its recent success in ensuring that a Chinese candidate wasn’t elected to lead the World Intellectual Property Organization (WIPO). Wang Binying was defeated by Singaporean Daren Tang, who was backed by the United States and many other Western nations, by a vote of 28 to 55.

“The Chinese thought they had a fast-track to that,” Pompeo said. “We put up a good candidate. … And we crushed them.”

“It was an amazing diplomatic effort.”

Pompeo says the State Department will create a permanent team to focus on leadership elections at U.N. agencies, and also to raise efforts to secure U.S. representation at these bodies.

He also defended the administration’s decision to formally withdraw from the World Health Organization (WHO) earlier this year over its handling of the pandemic and its relationship with the Chinese regime. Washington has repeatedly criticized the health agency for its deference to Beijing and for aiding the regime in its coverup of the CCP virus during the initial outbreak.

He said U.S. efforts over the years to depoliticize the WHO haven’t been successful.

“Each time we got reforms, there was no capacity to make that a science-based organization, and not a political one,” Pompeo said.

The secretary said the “tide is turning” against the CCP on the world stage, as the United States works to build a “global alliance” targeting the regime’s hostile actions.

“Our vigorous diplomacy has helped lead an international awakening to the threat of the CCP,” Pompeo said.

He said a growing number of countries are rejecting Chinese telecoms giant Huawei from their 5G networks, denouncing the regime over its tightening grip over Hong Kong, and stepping up maritime maneuvers in the South China Sea in response to Beijing’s military aggressions.

“We’re asking every sovereign country to pick between freedom and tyranny,” he said.

“They all know that the United States is the country that they want to be alongside. They all know that freedom, and our values system, and the rule of law, and property rights, the protection of these unalienable rights, is central to their country. And it’s why I think the tide is turning around the world.”