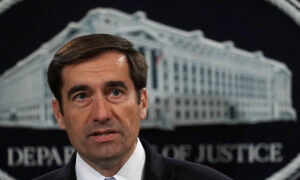 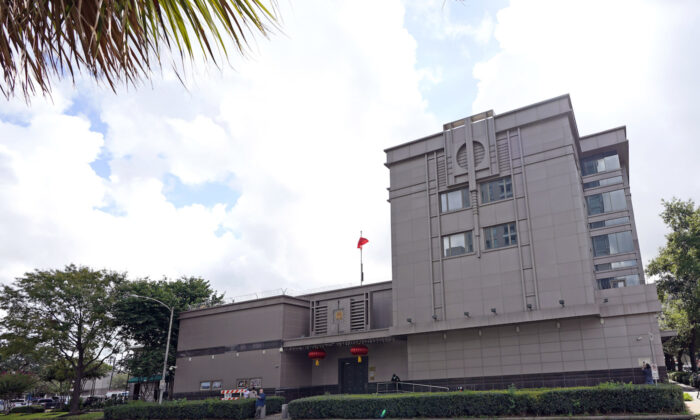 US Takes Over Chinese Consulate in Houston, Officials Say Closure of Facility ‘Not Random’

U.S. federal agents and local law enforcement entered and took over the Chinese consulate in Houston, Texas, on Friday, following a deadline issued by the Trump administration to close the facility.

The eviction comes as U.S. government officials told reporters that the decision to order the closure of the Houston diplomatic facility was “not random.”

Ahead of the eviction deadline, Houston police had set up barricades to close off streets near the building, the Chronicle reported.

Consular officials departed the facility in vans bearing diplomatic plates just prior to 4 p.m., reported The Associated Press. By that time, federal agents could be seen checking the locked doors of the consulate, and a locksmith was seen working to crack the lock on one of the doors.

A group of some 100 protesters against the Chinese Communist Party (CCP) had gathered across the street around the time of eviction, Reuters reported.

The closure order for the consulate was “to protect American intellectual property and Americans’ private information,” State Department spokeswoman Morgan Ortagus said on July 22. Senate Intelligence Committee acting Chairman Marco Rubio (R-Fla.) called the facility a “massive spy center” for the CCP, while Secretary of State Mike Pompeo accused it of being a “hub of spying and intellectual property theft.”

Early on Friday, Beijing ordered the U.S. consulate in Chengdu in China’s southwestern province of Sichuan, to shut down, in an apparent retaliation.

A senior Justice Department (DOJ) official told reporters in a teleconference on Friday that the Chinese consulate in Houston was implicated in an investigation of grant fraud at a Texas research institution, and that the decision by the United States to target that particular consulate “was not a random selection.”

“Consulate officials … were directly involved in communications with researchers and guided them on what information to collect,” the DOJ official said, adding that the Houston consulate was among those that promoted “talent plan” memberships, which can create incentives to steal intellectual property.

The United States has alleged that the Houston Chinese consulate harbored Chinese spies who tried to steal data from facilities in Texas, including the Texas A&M medical system and the University of Texas MD Anderson Cancer Center in Houston.

The DOJ official said that the closure of one consulate “as opposed to every facility” is intended “to send a message to the remaining [Chinese] officials that they’ve got to knock it off.”

“The espionage and influence activities run out of a consulate can rise ultimately to a level that threatens our national security,” the DOJ official said, later adding that there “has been an increase in malign activity, intelligence activity over time, and at some point you say enough is enough, and then you decide who is one of the worse offenders,” noting that “it is certainly not random that we picked Houston.”

A senior intelligence official said that theft of intellectual property and technology were prime concerns.

“We see this kind of behavior across the board. Houston in particular, though, their [science and technology] collectors were particularly aggressive and particularly successful. I think that is the reason why we tended towards Houston as well,” the intelligence official told reporters.

The DOJ had on Thursday announced charges against four Chinese researchers for hiding their ties to the Chinese military. One of the researchers, Tang Juan, who was working at the University of California, Davis, was taken into custody on Friday.

The senior DOJ official said that the charges represent “a microcosm” of a “broader network of individuals in more than 25 cities.”

“That network is supported through the consulates here. Consulates have been giving individuals in that network guidance on how to evade and obstruct our investigation,” the official said.

Tang had fled to and taken refuge in the Chinese consulate in San Francisco after being questioned on June 20 by FBI agents, prior to being arrested.

The DOJ announced on July 21 that two Chinese hackers were indicted for having stolen millions of dollars worth of trade secrets and other sensitive information from businesses and government agencies, and attempting to steal COVID-19 research.

Ivan Pentchoukov, Frank Fang, and The Associated Press contributed to this report.