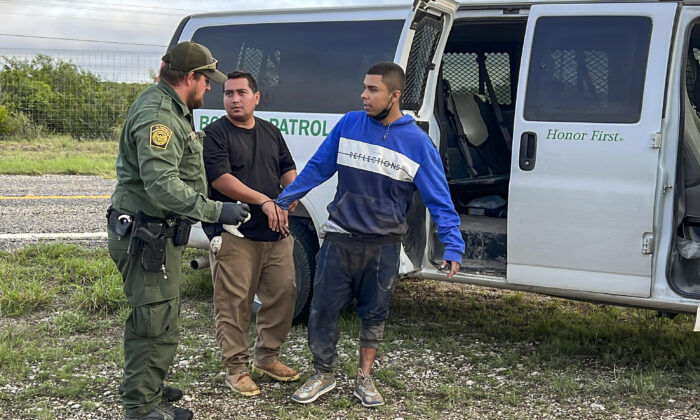 Arrests of illegal immigrants at the United States–Mexico border rose above 2 million in one fiscal year for the first time, according to new statistics released by the Biden administration.

While campaigning in 2020, President Joe Biden and his advisers said that if he was elected, he planned to dramatically change the U.S. government’s approach to immigration, including ending key Trump-era policies, such as the Migration Protection Protocols. However, he specifically mentioned not wanting to end up with 2 million migrants crossing the border.

“The timeline is to do it so that we, in fact, make it better, not worse. The last thing we need is to say we’re going to stop immediately the access to asylum the way it’s being run and end up with 2 million people on our border,” he said at the time. “It’s a matter of setting up the guardrails so we can move the direction.”

The policies that former President Donald Trump put into place “were the guardrails,” according to Mark Krikorian, executive director of the Center for Immigration Studies.

“By undoing everything Trump had done, Biden’s created this migration crisis, so the August numbers aren’t a surprise,” Krikorian told The Epoch Times. “They’re just a continuation of the trend we’ve seen over the past year and a half. But they are a reminder of this administration’s culpability for this disaster at the border.”

There are no indications that the trend is going to slow or reverse, even if Republicans capture a majority in Congress in the November elections, he said, because the executive branch is ultimately responsible for immigration policy.

Administration officials said about a third of the illegal immigrants arrested at the U.S. southern border in August were from communist-ruled countries.

Out of 157,921 unique individuals encountered at the border—some are apprehended again after being deported—55,333, or 35 percent, were from Venezuela, Cuba, or Nicaragua. That was a jump of 175 percent from August 2021.

The percentage of Mexican and Central American natives taken into custody fell by 43 percent from that month.

“Failing communist regimes in Venezuela, Nicaragua, and Cuba are driving a new wave of migration across the Western Hemisphere, including the recent increase in encounters at the southwest U.S. border,” Chris Magnus, a Biden appointee who heads CBP, said in a statement.

The administration is working “to secure our border and safely and humanely process and vet every individual encountered, but those fleeing repressive regimes pose significant challenges for processing and removal,” according to Magnus.

While setting a new record for border arrests, the administration is also on track to remove more illegal immigrants in a fiscal year than ever before.

About 977,500 expulsions have been carried out among southern border-crossers this fiscal year through Title 42.

That emergency order was promulgated by the Centers for Disease Control and Prevention during the Trump administration because of concerns that illegal immigrants would carry COVID-19 into the country.

Biden administration officials tried ending the order earlier this year but were stopped by a federal judge in May because officials didn’t implement a public comment period as required by the Administrative Procedure Act.

Title 42 enables quick expulsion of some illegal immigrants, but they aren’t penalized in any way. Some quickly try to cross the border again.

Twenty-two percent of those apprehended in August were people who were arrested at least once in the previous 12 months, according to CBP.