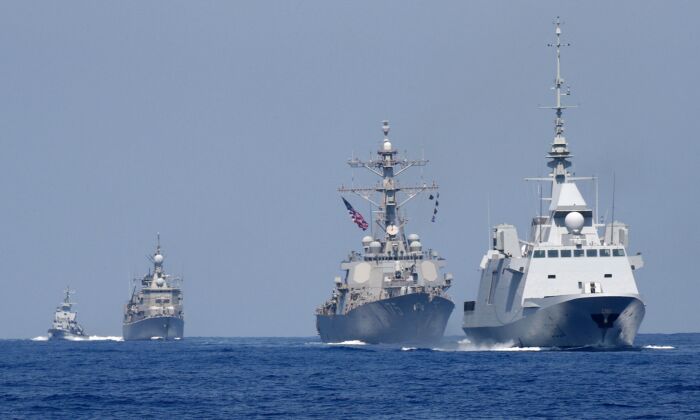 The French anti-submarine frigate FREMM Auvergne (R) and the US Navy USS Donald Cook class guided missile destroyer (2R) and the Greek HS Aigaion frigate (2L) during an exercise how simulate a humanitarian response to a powerful earthquake and significant movement of IDF vessels and foreign vessels in the Mediterranean sea on Aug. 7, 2019. (JACK GUEZ/AFP via Getty Images)
US-China Relations

The U.S. Navy and U.S. Marine Corps commenced a large globe-spanning military exercise on Aug. 3—the largest of its kind since the Cold War. The next day, China announced a large-scale drill in the South China Sea in response.

“LSE 2021 is the first naval and amphibious large-scale exercise conducted since the Ocean Venture NATO exercises launched in 1981 during the Cold War,” U.S. Naval Forces Europe-Africa/U.S. 6th Fleet said in a July 27 statement.

This includes approximately 36 live ships ranging from aircraft carriers to submarines, more than 50 virtual units, and an unlimited array of constructive units, U.S. forces reported a day before commencement.

On Aug. 4, the Chinese Maritime Safety Administration announced that the Chinese military would perform a training exercise across about 38,600 square miles of the South China Sea from Aug. 6 to Aug. 10.

“It’s clearly a reaction or response to the LSE 2021, but not an aggressive one,” Tang Jingyuan, U.S.-based China affairs commentator told The Epoch Times on Aug. 4. “It’s more like a political statement to proclaim that the Beijing authorities will protect the islands it has occupied.”

Of the large U.S. exercise, Tang said, “In my eyes, the U.S. wants to show the world that it has the capability to address challenges in the Black Sea, Mediterranean Sea, South China Sea, and East China Sea simultaneously by performing the LSE 2021.

“In other words, the U.S. military is strong enough to face the situation if Russia and China break the peace in Europe and Asia at the same time,” he said.

The U.S. Navy and Marine Corps want to “refine how we synchronize maritime operations across multiple fleets in support of the joint force,” the Navy stated on Aug. 3.

According to the statement, the exercise will be performed simultaneously across 17 time zones. The synchronized operations include “distributed maritime operations, expeditionary advanced base operations, and littoral operations in a contested environment.”

Adm. Robert P. Burke, commander of U.S. Naval Forces Europe, added, “LSE will test our commanders’ abilities to deliver coordinated effects, from all directions, any time or all the time. It will help us build the necessary muscle memory to do this routinely at the operational to strategic levels of war.”

The purpose of this maritime military exercise is for upholding peace and stability in the region, Adm. Samuel Paparo, commander of the U.S. Pacific Fleet, said in the statement.

“The international rules-based order is essential to our nation, and our partners and allies for peace, security, and stability.”

LSE 2021 is only one of the actions that the U.S. government is taking worldwide, especially in the South China Sea and East China Sea.

The Quadrilateral Security Dialogue between the United States, Japan, Australia, and India agreed in their 2021 joint statement on March 12 to be united in “a shared vision for a free and open Indo-Pacific,” and a “rules-based maritime order in the East and South China Seas,” which Quad members state is needed because China is pushing its maritime claims.

U.S. Vice President Kamala Harris plans to visit Vietnam and Singapore this month with a focus on reinforcing regional security in Southeast Asia, which is threatened by aggression from the Chinese Communist Party. U.S. Secretary of State Antony Blinken has also been participating with Association of Southeast Asian Nations (ASEAN) member countries in five virtual ministerial meetings on Aug. 2 to Aug. 6.

“With support from the United States, Taiwan, Japan, and Southeast Asian countries aren’t worried that the Beijing authorities want to invade their territories,” Tang said.