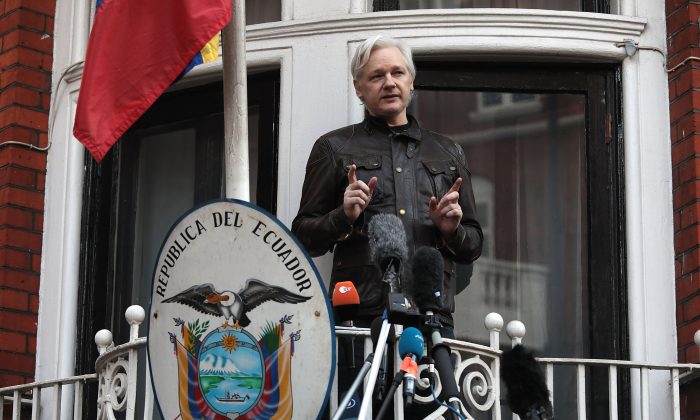 Julian Assange speaks to the media from the balcony of the Embassy of Ecuador in London on May 19, 2017. (Jack Taylor/Getty Images)
Judiciary

A federal magistrate judge in New York requested assistance from a UK court on Aug. 5 in obtaining testimony from WikiLeaks founder Julian Assange for a U.S. civil lawsuit brought against Fox News and others by the parents of slain Democratic National Committee voter data director Seth Rich.

“In the proper exercise of its authority, this court has determined that the evidence cannot be secured except by the intervention of the English courts and that assistance from the English courts would serve to further the international interests of justice and judicial cooperation,” the judge wrote in a memorandum for the senior master of the Royal Courts of Justice.

Joel and Mary Rich, Seth Rich’s parents, sued Fox News in March 2018, nearly a year after the news network published and retracted an article titled “Seth Rich, slain DNC staffer, had contact with WikiLeaks, say multiple sources.” The Riches claimed the network inflicted intentional emotional distress on them by slandering their son. The case was dismissed in August 2018, but the 2nd Circuit Court of Appeals overturned the dismissal more than a year later.

The case has since entered the discovery phase and the judge determined that Assange’s testimony is crucial for determining the central dispute between the parties—whether the article was a “sham” as the Riches claim, or “substantially true” as maintained by Fox News.

“Mr. Assange, as founder of WikiLeaks, is exceptionally suited to provide testimony that will be highly relevant to these issues. Therefore, Fox News, by and through this letter of request issued by the District Court, is formally requesting the testimony of Mr. Assange for use at trial,” the request to the UK court states.

The attorneys for the Riches didn’t reply to a request for comment.

Seth Rich was killed in Washington on July 10, 2016, less than two weeks before WikiLeaks “released a collection of thousands of internal emails and documents taken from the DNC servers,” the U.S. court request states. One month after Rich’s murder, Assange referenced the DNC staffer in an interview with a Dutch television reporter when discussing the dangers faced by WikiLeaks sources. On Aug. 9, 2016, WikiLeaks offered $20,000 for information about Rich’s murder. The website increased the reward to $130,000 in January 2017.

The Fox News article—authored by Malia Zimmerman, one of the named defendants—cited an anonymous federal investigator who claimed to have reviewed the FBI forensic file on Rich and read emails between the slain staffer and WikiLeaks. Two days after the article was published, Joel Rich wrote to Zimmerman asking that the article be retracted. Fox News retracted the article on May 23, stating that “the article was not initially subject to the high degree of editorial scrutiny we require for all our reporting.”

The magistrate judge’s request for assistance includes a list of 20 specific questions for Assange, including how, when, and from whom WikiLeaks obtained the stolen DNC emails and whether Seth Rich played any role in obtaining the emails or providing them to WikiLeaks.

The judge asked for a response from the UK counterparts by Sept. 1. Should the royal court oblige, the interview of Assange would proceed via video conference, according to Netburn’s request.

Assange is in a UK jail for failing to appear in court. He faces possible extradition to the United States, where he has been charged with espionage and hacking conspiracy for his work with Chelsea Manning, who was convicted in 2013 for illegally disclosing nearly 750,000 classified U.S. government files through WikiLeaks.

Even if Assange provides no information about Rich, the WikiLeaks founder’s testimony could have consequences reaching far beyond the civil lawsuit. While U.S. authorities blamed Russia for stealing the DNC emails, the claim remains an allegation with no conclusive evidence in the public realm.

After discovering hackers on its network in March 2016, the DNC hired cybersecurity firm CrowdStrike in early May 2016 to protect its system and oust the intruders. Special counsel Robert Mueller alleged that the DNC email server was breached more than three weeks later. CrowdStrike told The Epoch Times that there is no indication that any DNC system protected by its technology was ever breached. Shawn Henry, who led the CrowdStrike team, told Congress that his company had no evidence that emails were stolen from the DNC.

Assange has said that the source of DNC emails “is not the Russian government.”