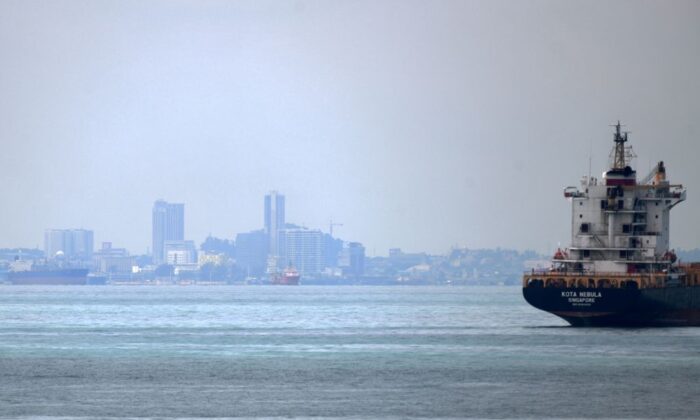 A vessel is seen opposite the Marina Pier in front of Indonesia's Batam island (background) in Singapore on May 2, 2020. (Roslan Rahman/AFP via Getty Images)
By Alex Wu

Indonesia and the United States are building a new maritime training center at the strategic meeting point of the Malacca Strait and the South China Sea, in a move to counter China’s increasing aggression in the region.

Construction has begun on the $3.5 million center on Indonesia’s island of Batam, at the southern entrance to the strategic Straits of Malacca, which is a crucial chokepoint for global maritime trade, connecting the Indian and Pacific oceans. China doesn’t have access points to the Indian Ocean.

The facility, which will be operated by Indonesia’s Maritime Security Agency, will be home to classrooms, barracks, and a helicopter launch pad, the agency said in a statement.

At a ceremony on June 25, U.S. Ambassador to Indonesia Sung Kim said the center would be part of continuing efforts between the two countries to strengthen security in the region.

“As a friend and partner to Indonesia, the United States remains committed to supporting Indonesia’s important role in maintaining regional peace and security by fighting domestic and trans-national crimes,” he said, according to the agency’s statement.

The building of the facility comes at a time when tensions have been rising in the South China Sea over the Chinese communist regime’s increasing aggression in the area. China has overlapping territorial claims for the disputed waters with several Southeast Asian countries, including Indonesia, the Philippines, and Vietnam.

In early June, it was revealed that Indonesia had been planning to expand its submarine fleet to 12 vessels from four in response to China’s repeated incursions into disputed waters in the South China Sea.

Indonesia considers the waters near its Natuna Islands within its exclusive economic zone (EEZ), while China claims sovereignty over the waters, citing the so-called nine-dash line historical claims within the South China Sea.

Indonesia believes if the size of the submarine fleet can be increased to 12, it can conduct intensive surveillance in areas that are difficult to reach by patrol ships, reducing the presence of foreign ships around the islands.

The Southeast Asian nation lost a submarine in April in a training accident, killing all 53 crew members.

Since late April, hundreds of Chinese vessels have been lingering around the disputed Spratly Islands, amid repeated protests by the Philippines government.

The Philippines claims the resource-rich Spratly is its territory, saying the island chain is within its EEZ. China, Taiwan, Vietnam, Malaysia, and Brunei also claim sovereignty over the islands.