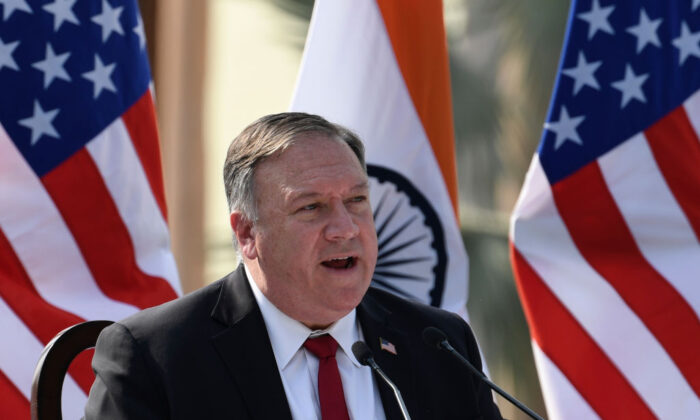 US Secretary of State Mike Pompeo speaks during a joint press briefing on the lawns of Hyderabad House in New Delhi on Oct. 27, 2020. (Money Sharma/AFP via Getty Images)
US-China Relations

The State Department has designated a Chinese Communist Party organization operating in the United States as a foreign mission. It also terminated a 2011 agreement with Beijing to hold a collaboration summit between governors in both nations.

The National Association for China’s Peaceful Unification (NACPU), an organization controlled by China’s United Front Work Department (UFWD), was slapped with the designation on Oct. 28, which means it will now be treated as a foreign embassy or diplomatic mission and be required to register its staff rosters and U.S. properties with the State Department.

The association was being used by the UFWD to “advance the PRC’s [People’s Republic of China] propaganda and malign influence,” Secretary of State Mike Pompeo said in a statement.

The United Front is an executive CCP agency behind Beijing’s efforts to persuade organizations or individuals to spread the Party’s propaganda, both inside and outside China.

Pompeo said the State Department made this decision to “shine a light on this organization and make clear that their messages come from Beijing.”

According to a 2018 report published by the U.S.-China Economic and Security Review Commission (USCC), the NACPU is the U.S. branch of China Council for the Promotion of Peaceful Reunification (CPPRC), which is directly operated by the United Front. The entity advocates for China’s claim over Taiwan, a self-ruled island that has its own democratically-elected government, military, currency, and other hallmarks of a sovereign state. Beijing has threatened military force to bring the island under its fold.

The CPPRC has at least 200 chapters in 90 countries, including 33 in the United States, according to the report.

“United Front organizations such as the National Association for China’s Peaceful Unification actively cultivate ties to campaign donors and politicians in the United States in order to lobby for Beijing’s policy priorities” and “encourage overseas Chinese to get involved in politics to advocate for Beijing’s interests,” USCC stated.

Pompeo also announced that the United States would discontinue taking part in a memorandum of understanding (MoU) signed between the two countries in 2011, which supported the creation of a U.S.-China National Governors Forum.

The MoU was inked by then-Secretary of State Hilary Clinton and then-Chinese foreign minister Yang Jiechi on Jan. 19, 2011, during a state visit by former Chinese leader Hu Jintao to the United States.

The forum was co-convened by the U.S. National Governors Association (NGA) and the Chinese People’s Association for Friendship with Foreign Countries (CPAFFC)—another organization that China experts say is operated by the United Front.

In a statement, Clinton said that the MoU would help U.S. states to “build their own successful partners” with their Chinese counterparts, and U.S. governors would be able to “share ideas” and “connect people and businesses.”

Pompeo said in his Thursday statement that the CPAFFC carried out actions that have “undermined the Governors Forum’s original well-intentioned purpose.”

He called the group “a Beijing-based organization tasked with co-opting subnational governments, has sought to directly and malignly influence state and local leaders to promote the PRC’s global agenda,” Pompeo said.

In February, Pompeo said CPAFFC was “the public face” of the United Front, in a speech about China’s influence given at a National Governors Association meeting in Washington.

According to NGA’s website, more than 400 representatives of businesses and governments from the two countries attended the event, including governors of Kentucky and Tennessee, and lieutenants governors of Washington, Michigan, and Colorado.

John Dotson, editor of China Brief published by the think tank Jamestown Foundation, analyzed the Lexington event in an article published in June 2019. He noted that Chinese officials sought to influence U.S. governors’ positions on the trade war that was unfolding between the two countries. For example, Chinese Ambassador to the U.S. Cui Tiankai stressed the importance of “sub-national relations” during his speech at the forum.

Cui also said U.S. states including Kentucky and Tennessee saw a drop in their exports to China due to the trade frictions and accused unnamed people of “inciting a new Cold War at the expense of the people’s interests.”

Since last year, Chinese state-run media and officials have repeatedly accused the United States of launching “a new Cold War” or having a “cold war mentality.”

Dotson wrote: “The PRC strategy of ‘sub-national’ engagement with U.S. states is motivated in part by specific concerns related to ongoing U.S.-China trade disputes, and the desire to seek alternate avenues of economic engagement at the state level—and perhaps, indirect political pressure on U.S. federal authorities.”

United Front operations have been targeted by the U.S. administration in recent months.

In September, New York Police Department officer Baimadajie Angwang was charged for acting as an illegal agent for the Chinese regime. According to court documents, his handler at the Chinese consulate in New York City was assigned to a UFWD division, the China Association for Preservation and Development of Tibetan Culture.

In August, the State Department designated a Washington-based center that promotes Confucius Institutes in the United States as a foreign mission. Pompeo said the institutes were being used to advance “Beijing’s global propaganda and malign influence campaign on U.S. campuses and K–12 classrooms.”