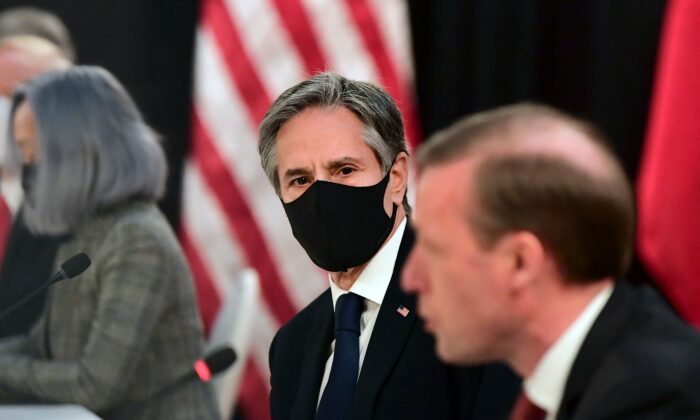 US National Security Advisor Jake Sullivan (R) speaks as US Secretary of State Antony Blinken (C) looks on at the opening session of US-China talks at the Captain Cook Hotel in Anchorage, Alaska on March 18, 2021. (Frederic J. Brown/AFP via Getty Images)
US-China Relations

US, Chinese Diplomats Clash Publicly in First Meeting Under Biden

The Sino-U.S. talks in Alaska got off to a rocky start on March 18, when the top diplomats of both countries traded sharp criticism against each others’ policies in front of reporters.

The two-day bilateral meeting in Anchorage, Alaska, was the first high-level, in-person talks between Beijing and Washington since President Joe Biden took office in January. Heading the U.S. delegation were Secretary of State Antony Blinken and National Security Adviser Jake Sullivan, while the Chinese side was represented by foreign minister Wang Yi and senior foreign policy diplomat Yang Jiechi.

“We’ll also discuss our deep concerns with actions by China, including in Xinjiang, Hong Kong, Taiwan, cyber attacks on the United States, and economic coercion toward our allies. Each of these actions threaten the rules-based order that maintains global stability,” said Blinken in his opening remark.

He added: “That’s why they’re not merely internal matters and why we feel an obligation to raise these issues here today.”

The typical few minutes of opening remarks by both sides ended up being a public blowup before private meetings got underway.

Sullivan said: “A confident country is able to look hard at its own shortcomings and constantly seek to improve.”

Soon after, Yang, via an interpreter, said: “It was my bad. When I entered this room, I should have reminded the U.S. side of paying attention to its tone in our respective opening remarks, but I didn’t.” He then accused the U.S. side of speaking in a “condescending way.”

Yang then lashed out over what he said was the United States’ struggling democracy, poor treatment of minorities, and criticizing its foreign and trade policies.

“China will not accept unwarranted accusations from the U.S. side,” he said.

Following the heated exchanges, a senior administration official issued a statement, criticizing the Chinese side for violating the meeting’s protocol, saying that there was an agreement that each of the four diplomats would limit his opening statement to about two minutes. Yang ended up speaking for more than 15 minutes.

“The Chinese delegation … seems to have arrived intent on grandstanding, focused on public theatrics and dramatics over substance,” the official added.

Gordon Chang, author of “The Coming Collapse of China,” took to Twitter to express his view on the Chinese delegation.

“In the past, #China’s diplomats were cunning, pretending to be friendly and responsible. Now, however, they are arrogant beyond belief. Yang Jiechi in #Alaska just dropped the mask to show #Beijing’s true ugly face,” Chang wrote.

One of the things Yang said in his long opening remark was that Xinjiang, Tibet, and Taiwan were “an inalienable part of China’s territory,” and issues regarding the three regions were “internal affairs.”

Taiwan is a de-facto independent country with its own democratically-elected government, military, constitution, and currency. However, Beijing has threatened to bring the island under its fold with military actions.

Beijing has stepped up its coercion against Taiwan since the start of this year by sending military planes into Taiwan’s air defense identification zone (ADIZ) on a nearly daily basis. Most recently on March 17, a Chinese anti-submarine warfare aircraft entered southwestern Taiwan’s ADIZ, according to Taiwan’s Ministry of National Defense.

In a joint letter dated March 17 to Biden, Blinken, and Sullivan, Rep. Ashley Hinson (R-Iowa) led a group of lawmakers asking the U.S. delegation to “reiterate our nation’s strong commitment to Taiwan against the threat of the Chinese Communist Party (CCP)” during talks in Anchorage.

Rep. Tim Burchett (R-Tenn.), one of the lawmakers who signed the joint letter, called on the Biden administration to be tough on China in talks in Anchorage, according to a statement from this office.

“Aggression towards our ally Taiwan, cracking down on pro-democracy demonstrations in Hong Kong, genocide against the Uyghurs, theft of Americans’ private personal information—the CCP is responsible for all these developments and needs to be held accountable,” Burchett wrote.

Burchett added: “The CCP is an adversary, they don’t play straight with us and want to weaken our position in the Indo-Pacific.”