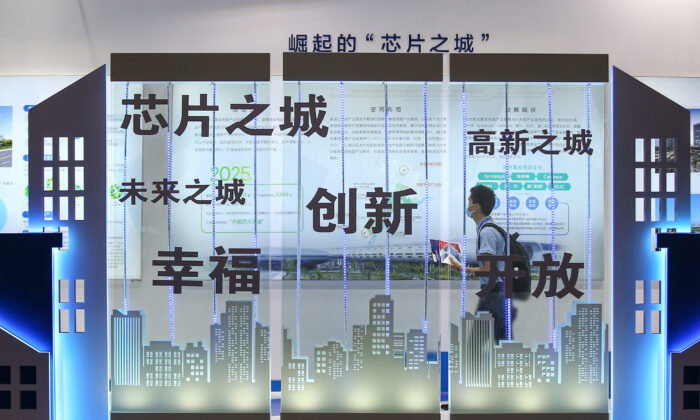 Semiconductors are at the heart of the U.S.-China competition for tech supremacy. They are expensive and critical, and the Chinese regime has vowed to outspend the United States by almost 50 to 1 in developing semiconductors.

Semiconductors, or “chips,” are an integral component of the technological products, which drive a country’s economic development. They are generally made of nano-sized (one-billionth sized) crystals, the most common of which is silicon. Also called silicon wafers, semiconductors are thinner than a single strand of human hair and contain as many as 40 billion components.

Only a small number of firms are capable of producing the highest quality semiconductors, which are incredibly complex. In addition to requiring advanced scientific knowledge, their manufacture is also extremely capital intensive—semiconductors are very expensive to develop and produce.

China is the primary rival of the United States in the battle for semiconductors. The Chinese Communist Party’s (CCP) 14th five-year plan called for autonomy in semiconductor production. Shortly after the plan’s release, Chinese Premier Li Keqiang identified investments in core technologies, including chips, AI, and 5G, as a way of catching up with the United States.

Over the past 20 years, Chinese chipmakers have received over $50 billion in government subsidies. Consequently, in 2019, China’s chip exports hit $101 billion. The CCP has established a $58 billion semiconductor investment fund, while local governments have pledged an additional $60 billion. Additionally, semiconductor companies are provided with a 10-year corporate tax exemption.

Taiwan is a world leader in semiconductors—responsible for 63 percent of the global market. The CCP will do almost anything to obtain talent and technology from the island nation. The reoccurring cyberattacks on Taiwan are an example of the lengths the CCP will go to, in order to steal Taiwanese chip technology. In response, four Taiwanese members of parliament, representing the Democratic Progressive Party (DPP), have proposed tightening the country’s commercial secrets law to prevent the CCP from obtaining Taiwanese semiconductor technology or human capital. The four lawmakers said that Beijing’s interest in stealing Taiwanese technology was not only financially motivated, but was also an attempt to make Taiwan poor and weak, and more susceptible to coercion.

China had some success with developing its own semiconductors. AI chips used in cloud computing have been developed by Alibaba. Huawei’s Kirin chip, which is used for 5G equipment and smartphones, is said to be as good as comparable chips made by Samsung and Qualcomm.

But China is still behind the United States in terms of chip manufacture. Huawei’s Kirin chipsets are actually manufactured by a Taiwanese company, Taiwan Semiconductor Manufacturing Corporation (TSMC), which uses American technology.

TSMC is the world’s leading firm, accounting for 54 percent of global semiconductors. Miniaturization is one of the most important aspects of chip development, and TSMC is presently working on a 3-nanometer (nm) production process. The company also hopes to have 2-nm chips available by 2025.

According to the Center for Strategic and International Studies (CSIS), it will take China at least 10 years to catch up with the United States in chipmaking. CSIS said that the time frame could be extended if the United States cut off China’s access to technology and financing. CSIS recommends the United States to block exports of semiconductors and semiconductor manufacturing equipment, and prevent China from purchasing chips made with U.S. equipment and from acquiring U.S. chipmaking companies.

The United States has taken a number of steps to protect U.S. semiconductor technology and to slow China’s advance. The National Security Commission on Artificial Intelligence (NSCAI) has recommended strengthening U.S. legislation in order to prevent China from obtaining semiconductor technology. Washington has already placed sanctions on China’s SMIC because its chips had military applications.

On the domestic front, CSIS felt it was defense critical for the U.S. government to invest in chipmakers. And this is what the United States is doing. The Creating Helpful Incentives to Produce Semiconductors (CHIPS) for America Act was a bill proposed in Congress to restore American leadership in semiconductor manufacturing, a goal which could be achieved by providing long-term economic incentives for research and development. Among other funding provisions, this bill called for the creation of a $10 billion fund to encourage investments in semiconductor manufacturing facilities.

The CHIPS bill was incorporated into the National Defense Authorization Act. It created a National Semiconductor Technology Center, which provides funding for private sector research and development. NSCAI has proposed $35 billion in grants and funding for chip research and manufacture. This is in addition to $37 billion already promised by President Joe Biden.

The CCP has vowed to outspend the United States 50 to 1 in developing semiconductors, but the United States is a much richer country. In 2019, the CCP imported $300 billion in computer chips, which is more than it spent on oil. The semiconductor war is looking very much like the military spending escalations of the Cold War with Russia.