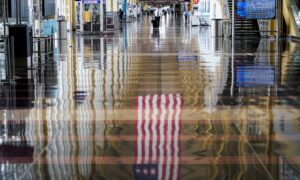 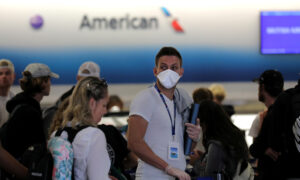 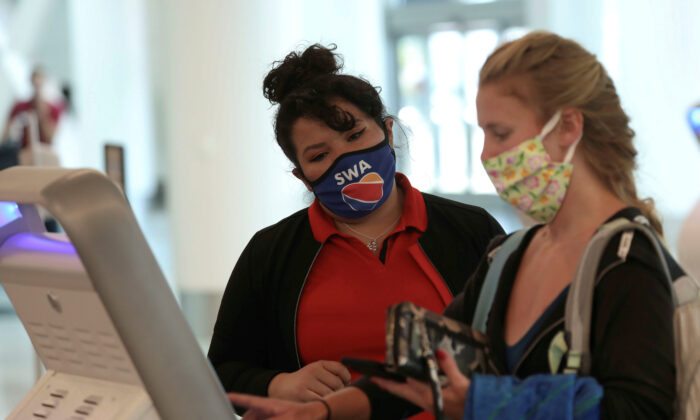 A Southwest Airlines employee wears a protective mask while assisting a passenger at Los Angeles International Airport (LAX) during the outbreak of the CCP virus in Los Angeles, Calif., on May 23, 2020. (Patrick T. Fallon/Reuters)
US News

US Airlines Threaten to Ban Passengers Who Refuse to Wear Masks

Major U.S. airlines may prevent anyone not wearing a mask from boarding and provide the coverings to passengers who have none. Once on board, however, flight attendants have had little power over passengers who remove the face covering.

The airlines will clearly inform passengers about their individual policies on face coverings before flying, followed by an announcement with specific details onboard, it said.

Each carrier will decide the appropriate consequences for passengers who fail to comply, up to and including being put on that airline’s no-fly list.

Airlines offer certain exemptions, including when people are eating or drinking.

American Airlines said its updated policy will go into effect on Tuesday, followed by United on Thursday.

United said those who do not comply will be placed on an internal travel restriction list that would prevent them from flying with the airline “for a duration of time to be determined pending a comprehensive incident review.”

Delta said it was doubling efforts to ensure customers are aware of, acknowledge, and comply with its mask requirement, which it said is one of the most important ways to “stay safe while flying.”

The measures are expected to remain in place throughout the CCP virus crisis.

On Twitter, Senator Ed Markey, who has been vocal along with about a dozen other Democratic senators on airline issues during the pandemic, praised the tougher enforcement policies, adding “But we still need federal action immediately.”

The U.S. government has not mandated any airline safety requirements since the pandemic hit global aviation, despite calls from unions and industry.

“The federal government has completely abdicated its responsibility to keep the flying public and aviation workers safe during COVID-19,” said Sara Nelson, president of the Association of Flight Attendants-CWA said, adding “the industry alone cannot fix this.”

The administrator of the Federal Aviation Administration, Stephen Dickson, is expected to be questioned about masks at a Senate hearing on Wednesday.

By Tracy Rucinski and David Shepardson