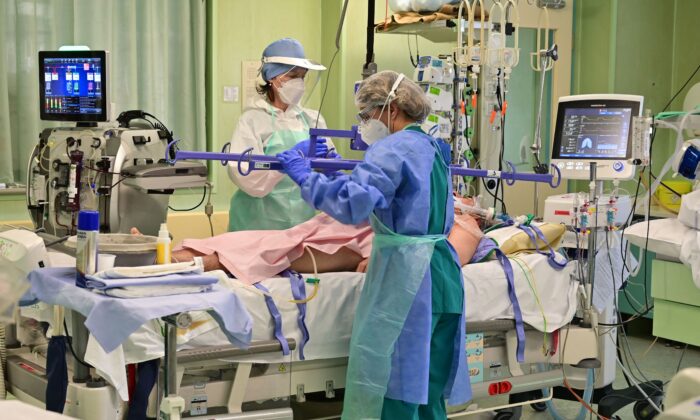 Members of the medical staff wearing personal protective equipment (PPE) tend to a patient in the COVID-19 unit of the Bolognini hospital in Seriate, Bergamo, Italy, on March 12, 2021. (Miguel Medina/AFP via Getty Images)
WORLD

Three Hawaii residents who were fully vaccinated against the CCP virus have tested positive for COVID-19, the disease caused by the virus, according to the Hawaii Department of Health (DOH).

All three patients had received both doses of the Pfizer/BioNTech or Moderna vaccines, reported KITV4. They all experienced mild symptoms and did not appear to spread the disease to others, the DOH told the news station.

Brazil reported more than 3,000 COVID-19 deaths in a single day for the first time Tuesday amid calls for the government and the new health minister to take action to stem the nation’s resurgence of coronavirus infections.

In recent weeks, Latin America’s largest country has become the pandemic’s global epicenter, with more deaths from the virus each day than in any other nation. Tuesday’s record toll of 3,251 deaths was driven by the state of Sao Paulo, Brazil’s most populous, which recorded 1,021 new deaths, far above the previous high of 713 last July.

The pandemic has brought the health systems of Brazilian states to near collapse, with hospitals watching their ICU beds fill up and stocks of oxygen required for assisted breathing dwindle. Most of the states in recent days adopted measures to restrict activity, over the fierce resistance of Brazilian President Jair Bolsonaro.

Getting a COVID-19 vaccine will not impact people’s life insurance policy payout in the event of death, according to the American Council of Life Insurers (ACLI), a trade association that represents the life insurance industry in the United States.

“Life insurance policy contracts are very clear on how policies work, and what cause, if any, might lead to the denial of a benefit,” Paul Graham, senior vice-president of ACLI said in a press release. “A vaccine for COVID-19 is not one of them.”

“Policyholders should rest assured that nothing has changed in the claims-paying process as a result of COVID-19 vaccinations,” he added.

The European country has been struggling with a surge of infections and health experts say it’s partly fueled by the CCP (Chinese Communist Party) virus variant found in Britain.

WH: 27 Million Vaccine Doses to Be Shipped Next Week

The White House says 27 million doses of COVID-19 vaccines will be distributed next week, more than three times the number when President Joe Biden took office just over two months ago.

COVID-19 coordinator Jeff Zients informed governors on their weekly conference call that 23 million doses of Pfizer and Moderna and about 4 million of Johnson & Johnson’s single-dose vaccine will be shipped next week.

US Adults Gained Over 1 Pound Each Month During Lockdowns: Study

Pfizer Inc has started an early-stage U.S. trial of an oral COVID-19 antiviral therapy that could be prescribed to patients at the first sign of infection, the company said on Tuesday.

The drugmaker, which developed the first authorized COVID-19 vaccine in the United States with Germany’s BioNTech SA, said the antiviral candidate showed potent activity against SARS-CoV-2, the virus that causes COVID-19, in lab studies.

Consumer confidence in Brazil registered its third-largest monthly fall on record, a survey indicated on Tuesday, hammered by a deadly second wave of the CCP virus pandemic and near collapse of the public health system in several cities.

Sinovac claims its COVID-19 vaccine is safe in children ages 3–17, based on preliminary data, and it has submitted the data to Chinese drug regulators.

More than 70 million shots of Sinovac’s vaccine have been given worldwide, including in China. Two recipients developed high fevers in response to the vaccine, one a 3-year-old and the other a 6-year-old, while many others in the trial experienced mild symptoms, Gang Zeng, the medical director at Sinovac said.

Fauci Warns of Possible Surge in US

Dr. Anthony Fauci is warning that a surge of CCP virus cases in Europe could foreshadow a similar surge in the United States.

Fauci, the nation’s top infectious disease doctor, urged Americans to remain cautious. In an interview on ABC’s “Good Morning America,” he said he is “optimistic” of COVID-19 vaccines’ effectiveness and expressed hope that the AstraZeneca vaccine could join the arsenal of inoculations.

Germany is extending its lockdown until April 18 and calling on citizens to stay at home for five days over the Easter holidays to try to break a third wave of the COVID-19 pandemic, the disease caused by the CCP virus, Chancellor Angela Merkel said early on Tuesday.

In talks that ran deep into the night, Merkel pushed the leaders of Germany’s 16 states to take a tougher stance to fight the pandemic, reversing plans for a gradual re-opening of the economy agreed earlier this month after a sharp rise in the infection rate.

AstraZeneca May Have Used Outdated Information in Vaccine Trial: US

The Data Safety Monitoring Board notified the company and two health agencies late Monday that it was worried by the information AstraZeneca released on its trial.

The board, which monitors trials and reviews data collected at regular intervals, “expressed concern that AstraZeneca may have included outdated information from that trial, which may have provided an incomplete view of the efficacy data,” according to the National Institute of Allergy and Infectious Diseases (NIAID), one of the agencies.