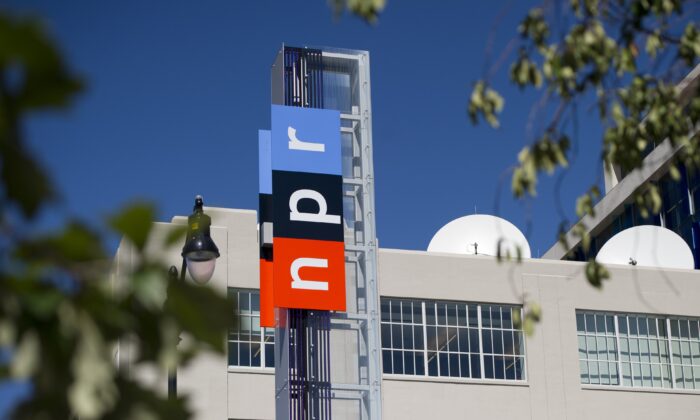 NPR's headquarters in Washington in a file photo. (Saul Loeb/AFP via Getty Images)
US News

National Public Radio (NPR) is refusing to correct a story that has been challenged by a trio of Supreme Court justices, triggering a flood of criticism.

Citing anonymous sources, reporter Nina Totenberg said Chief Justice John Roberts had recently “asked the other justices to mask up” because Justice Sonia Sotomayor had expressed concerns for her safety amid the recent surge in COVID-19 cases. Totenberg said that because Justice Neil Gorsuch refused the request—Gorsuch hasn’t worn a mask on the bench recently—Sotomayor started attending oral arguments from her chambers.

In rare public statements made a day later, all three justices responded to the report.

“While we may sometimes disagree about the law, we are warm colleagues and friends,” the two justices said in a joint statement.

Even worse for NPR, which is partially funded by taxpayer money, Roberts said in a separate statement that “I did not request Justice Gorsuch or any other Justice to wear a mask on the bench.”

Despite the direct challenges to the story, NPR hasn’t issued a correction.

“The chief justice issued a statement saying he ‘did not request Justice Gorsuch or any other justice to wear a mask on the bench.’ The NPR report said the chief justice’s ask to the justices had come ‘in some form.’ NPR stands by its reporting,” Totenberg wrote in a follow-up story.

Ask and request are synonyms that mean essentially the same thing. The only change to the initial piece was the addition of a hyperlink to the follow-up story.

An NPR spokesman told The Epoch Times via email that the outlet “continues to stand by Nina Totenberg’s reporting.”

Jeffrey McCall, a communications professor at DePauw University, said the decision not to correct the story means that NPR is calling the justices liars, “which, frankly, comes off as unseemly.”

“The justices have made a public statement and, if NPR wants to dispute it, they need to do more to provide context and even identify their source. The general public knows NPR is a largely agenda-driven news outlet, and they will lose in a credibility contest with Supreme Court justices,” McCall said.

The NPR spokesman and Totenberg declined to answer or didn’t respond to several sets of questions, including whether any other NPR employees verified the sources cited by Totenberg, who was previously fired from the National Observer for plagiarism.

NPR Public Editor Kelly McBride said the different descriptions mean the story “merits a clarification, but not a correction.”

“After talking to Totenberg and reading all justices’ statements, I believe her reporting was solid, but her word choice was misleading,” McBride wrote.

“In the absence of a clarification, NPR risks losing credibility with audience members who see the plainly worded statement from Roberts and are forced to go back to NPR’s story and reconcile the nuances of the verb ‘asked’ when in fact, it’s not a nuanced word,” McBride said.

Readers and listeners have apparently contacted the media outlet expressing concern over the issue.

“In order for the story to be true as NPR first reported, Roberts would’ve had to have asked ‘in some form,’ but he said he didn’t, full stop,” one said.

Joe Concha, a media critic at The Hill, wrote on Twitter that “NPR couldn’t have handled this any worse,” linking to McBride’s piece.

The Society of Professional Journalists stated that ethical journalism should be “accurate and fair” and recommended that reporters largely stick to sources that are clearly identified. Reporters should also “respond quickly to questions about accuracy, clarity, and fairness,” the group said, noting that mistakes should be acknowledged and corrected promptly and corrections and clarifications should be explained “carefully and clearly.”

Totenberg later spoke to the Daily Beast, criticizing McBride for the column.

Responding to Justice Roberts’s direct challenge to her reporting, she claimed that “I did not say that he requested that people do anything, but ‘in some form’ did.”