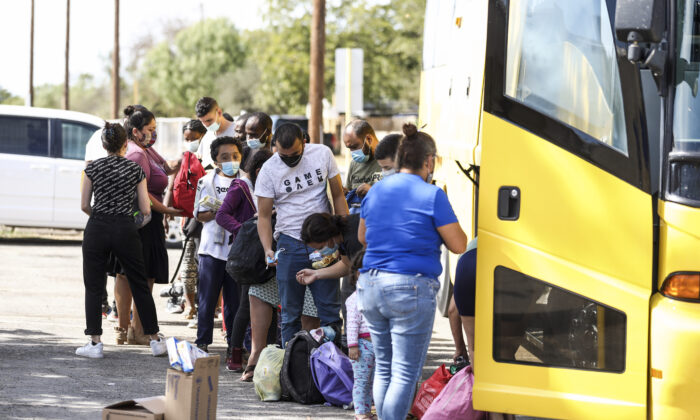 Haitians and others who crossed the U.S. border illegally are seen boarding a bus after being released by federal authorities, in Del Rio, Texas, on Sept. 22, 2021. (Charlotte Cuthbertson/The Epoch Times)
Florida

The Biden administration’s repeated release of illegal immigrants has drawn a legal challenge from the state of Florida.

Florida Attorney General Ashley Moody, a Republican, sued the federal government over its “catch-and-release” policy, which has led to the freeing of over 225,000 illegal immigrants this year.

The lawsuit primarily concerns the treatment of immigrants seeking asylum, which is granted in cases where authorities rule they have a legitimate fear of persecution based on their race, religion, or several other reasons.

Federal law requires the government to detain the asylum seekers until authorities rule on their case. But under President Joe Biden, it has released at least 225,000 illegal immigrants, including asylum seekers, so far, according to Customs and Border Protection data.

“Releasing this many arriving aliens into the interior necessarily means that the government is violating congressional commands in the immigration laws,” the 23-page suit, filed in federal court in Pensacola, states.

“We are seeing dramatic effects at our border. It is an unmitigated crisis based on this president’s refusal to follow federal law. It’s in black and white, folks, and it’s not a president’s responsibility to decide whether he agrees with the law. In fact, the head of an executive branch must follow the law,” Moody told reporters during a briefing in Lee County.

Florida is asking the court to find the Biden administration’s “catch-and-release” policy unlawful and require defendants to stop enforcing the policy while coming into alignment with requirements set by federal law.

Officials have defended the widespread release of illegal immigrants, claiming the law is being followed because they’re being given notices to appear in court or at an immigration office.

“We remain in touch with them. We monitor them to ensure their appearance in court at the designated time of appearance,” Homeland Security Secretary Alejandro Mayorkas told reporters in Washington last week after the administration released over 12,000 illegal immigrants who were clustered in Del Rio, Texas.

But fewer than 6 in 10 illegal immigrant asylum seekers show up in court, according to Department of Justice data.

Florida officials say the Biden administration’s policies are designed to boost immigration numbers, and illegal immigration has skyrocketed since the Democrat took office.

Todd Bensman, a senior national security fellow for the Center for Immigration Studies, said the Biden administration has been bypassing what previous administrations did, which was only releasing illegal immigrants when detention facilities were full.

One way the administration is doing that is by using its parole power, which was designed to be used for a small number of cases and only for “urgent humanitarian or significant public benefit.”

“The policy of releasing immigrants into the country on parole is vast, widespread, and historic in its scope,” Bensman told The Epoch Times.

The new suit asks the judge to stop the Biden administration from paroling immigrants without engaging in a case-by-case review.

Also on Tuesday, Florida Gov. Ron DeSantis, a Republican, announced an executive order that bars all Florida agencies under his purview from facilitating illegal immigration and requires state officials to collect information on the costs and scope of illegal immigration in the state.

“Since President Biden took office—which has been less than one year—the Border Patrol has released nearly a quarter-million illegal aliens into the United States,” DeSantis said in a statement. “This executive order makes it clear that Florida resources will not be used to prop up the failed open border agenda enacted by this administration.”