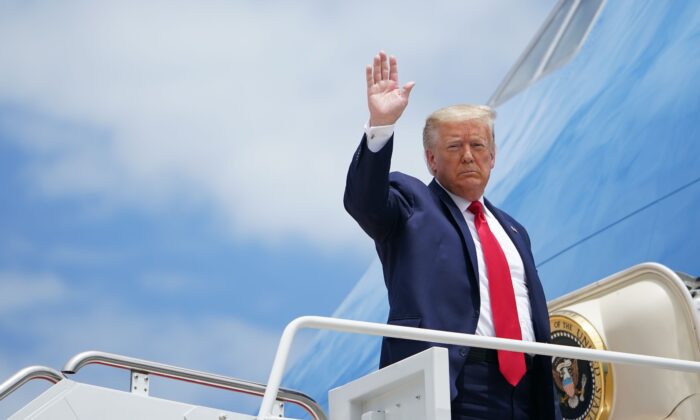 President Donald Trump boards Air Force One as he departs from Joint Base Andrews in Maryland on May 30, 2020. (Mandel Ngan/AFP via Getty Images)
By Jack Phillips

Tulsa Mayor G.T. Bynum, a Republican, declared a civil emergency and announced a curfew near the arena where President Donald Trump will host a campaign rally this weekend.

Bynum’s executive said that “crowds in excess of 100,000” are expected to show up near the rally. Opposition protests are also scheduled, according to the mayor, who said that he will place a federal exclusion zone near the arena.

The Tulsa Police Department also wrote that “as part of our preparations for President Trump’s Rally this Saturday, we are working on making the area secure for everyone’s safety.

“As posted earlier, the area illustrated in this map will need to be free of vehicles and pedestrian traffic,” the office wrote. In a separate post on Facebook, police said that the area of downtown will be off-limits from 10 p.m. Thursday to 6 a.m. Saturday.

Bynum, in his executive order, said that he received information from the city’s police department and other agencies that “individuals from organized groups who have been involved in destructive or violent behavior in other states are planning to travel to the City of Tulsa for purposes of causing unrest in and around the rally.”

People who were camped outside the arena to attend the Trump rally were moved out of the area, local media outlets reported.

🚨CURFEW IN EFFECT FOR DOWNTOWN🚨

As part of our preparations for President Trump’s Rally this Saturday, we are working on making the area secure for everyone’s safety.

As posted earlier, the area illustrated in this map will need to be free of vehicles and pedestrian traffic. pic.twitter.com/uT76N0IWRc

According to Trump’s reelection campaign, more than 1,000,000 people have registered online for the Tulsa rally, which is first-come-first-served. The arena has a capacity of under 20,000.

Supporters were required to sign a waiver releasing Trump’s campaign for potential exposure to the CCP (Chinese Communist Party) virus.

“Looking at a 2nd event in town to get more people to be w/@realDonaldTrump,” Trump campaign manager Brad Parscale wrote earlier this week. “Gonna be GREAT in the most open state in the nation!”

Tulsa Police Chief Wendell Franklin said the guardsmen will be used as a “force multiplier” to help secure safety zones around the downtown BOK Center where the rally is to be held.

The guardsmen will be unarmed but will carry shields, batons, and pepper spray in case they need to protect themselves, said Guard spokesman Lt. Col. Geoff Legler. Franklin says officers from multiple local, state, and federal law enforcement agencies also will help provide security and that several blocks downtown will be closed for Saturday’s event.