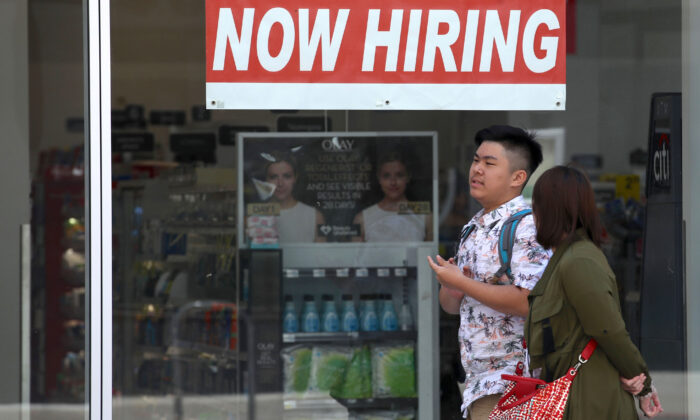 A now hiring sign is posted in the window of a CVS store in San Francisco, Calif., on June 7, 2019. (Justin Sullivan/Getty Images)
Economy

The U.S. unemployment rate unexpectedly fell in May and layoffs abated, the Labor Department said on Friday in a report that showed the latest signs the economic downturn caused by the COVID-19 pandemic was bottoming.

President Donald Trump, in a series of tweets Friday, hailed what in one message he called a “Really Big Jobs Report,” adding, “Great going President Trump (kidding but true)!”

“It’s a stupendous number. It’s joyous, let’s call it like it is. The Market was right. It’s stunning!” Trump wrote in another.

“These improvements in the labor market reflected a  limited resumption of economic activity that had been curtailed in March and April due to the coronavirus (COVID-19) pandemic and efforts to contain it,” William W. Beach, Commissioner of the Bureau of Labor Statistics said in a statement (pdf).

The surprisingly good jobs and unemployment figures come as economists polled by Reuters forecast the jobless rate jumping to 19.8 percent in May, while nonfarm payrolls for May were expected to fall by 8 million jobs.

U.S. stocks jumped at the open on Friday after the jobs report showed a surprise drop in the U.S. unemployment rate, lending weight to hopes of a faster economic rebound from a pandemic-driven slump.

The jobs market improved in the second half of May as businesses reopened after shuttering in mid-March to slow the spread of COVID-19.

Initial jobless claims figures released Thursday by the Labor Department (pdf) showed that 1.9 million Americans filed for unemployment benefits in the week ending May 30, in line with the recent downward trend in new claims for unemployment.

Surveys have also shown consumer confidence, manufacturing, and services industries stabilizing in May, suggesting the bottom may be in for the broader economic downturn triggered by a near shutdown of the country to control the spread of the Chinese Communist Party (CCP) virus, the novel coronavirus that causes COVID-19.

Many businesses had also reopened by mid-May. A new poll showed that nearly 8 in 10 small businesses in the United States are open in some capacity, though nearly two-thirds are worried about potential closures due to a second wave of the virus.

Negative sentiments toward both the overall national economy and local economies are softening, the poll showed, and most businesses that cut staff expect to rehire them.

These attitudes were reinforced by payroll data released on Wednesday, which showed signs of stabilization in the domestic labor market after the ADP National Employment Report said private employers laid off another 2.76 million workers, fewer than an expected 9 million job losses.