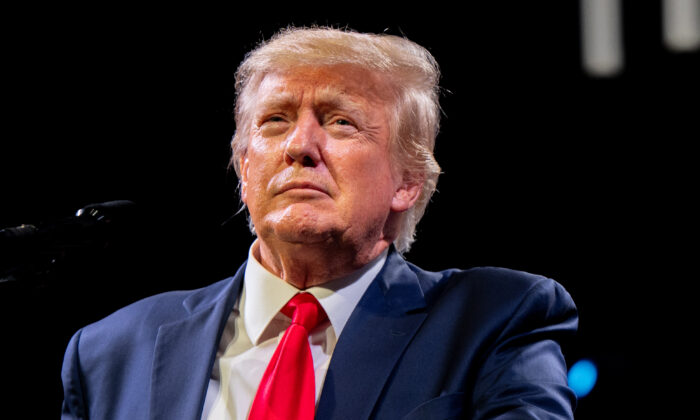 Former President Donald Trump speaks during the American Freedom Tour at the Austin Convention Center in Austin, Texas, on May 14, 2022. (Brandon Bell/Getty Images)
US News

Trump: Supreme Court Overturning Roe v. Wade ‘Only Made Possible Because I Delivered’

Former President Donald Trump on June 24 praised the Supreme Court after a majority of justices overturned Roe v. Wade while asserting the decision was only made possible because of his presidency.

“Today’s decision, which is the biggest WIN for LIFE in a generation, along with other decisions that have been announced recently, were only made possible because I delivered everything as promised, including nominating and getting three highly respected and strong Constitutionalists confirmed to the United States Supreme Court,” Trump said in a statement.

Trump, a Republican, was referring to how three of the six justices who ruled in favor of the state of Mississippi against Jackson Women’s Health Organization, an abortion clinic, were appointed by him.

The majority found that Roe was wrongly decided in 1973, as was a ruling in 1992 that reaffirmed Roe.

“The Constitution does not confer a right to abortion; Roe and Casey are overruled; and the authority to regulate abortion is returned to the people and their elected representatives,” the majority opinion stated.

“This is following the Constitution, and giving rights back when they should have been given long ago,” Trump told Fox News.

President Joe Biden, meanwhile, decried the ruling, saying in prepared remarks that the court “took away a right from the American people that it already recognized.”

“It was three justices named by one president, Donald Trump, who were the core of today’s decision to upend the scales of justice,” Biden, a Democrat, added later.

The reaction among members of Congress largely split along party lines. Republicans joined Trump in cheering the decision while Democrats decried the ruling.

Trump picked Gorsuch to fill a seat left open by the death of Justice Antonin Scalia, a Reagan appointee. Trump was able to appoint Gorsuch because the Republican-controlled Senate, during the last phase of President Barack Obama’s time in office, blocked Obama’s appointee, Merrick Garland, from a vote. Republican leaders said the 2016 election would serve as a way to see which party voters wanted to fill the seat.

Kavanaugh was elevated to the court with the retirement of Justice Anthony Kennedy, another Reagan appointee.

Ginsburg, who refused to retire during the Obama presidency, died of cancer complications on Sept. 18, 2020.

Because the GOP controlled the Senate and the White House at the time, they were able to confirm Barrett without any Democrat support.