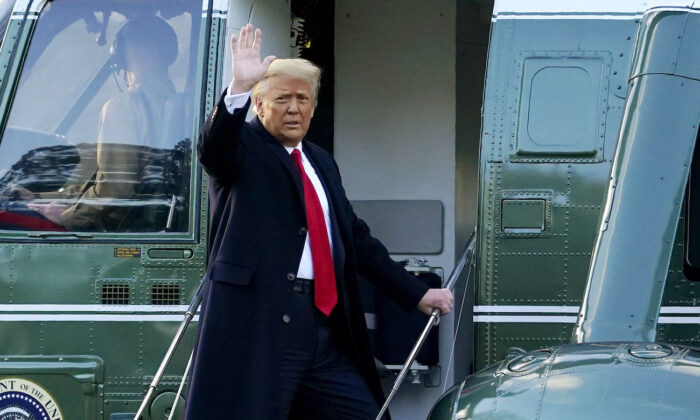 President Donald Trump waves as he boards Marine One on the South Lawn of the White House on Jan. 20, 2021. (Alex Brandon/AP Photo)
Impeachment Trial

Former President Donald Trump’s lead impeachment defense attorney Bruce Castor said that during the upcoming trial in the Senate, he will use video clips of top Democrats allegedly inciting violence.

Castor said the defense team will adhere to the strategy outlined in the brief they submitted to the Senate on Feb. 2.

The Trump defense team argued in the brief that the Constitution “requires that a person actually hold office to be impeached” and that Trump was exercising his First Amendment right of free speech to question the results of the November election.

The impeachment against Trump goes against the Constitution because Trump doesn’t hold any office after he left the White House on Jan. 20, the lawyers argued.

Castor revealed that during the impeachment trial, scheduled to start on Feb. 9, the defense team would use some video clips of top Democrats encouraging violence.

“I think you can count on that,” he told Fox’s Laura Ingraham. “If my eyes look a little red to the viewers, it’s because I have been looking at a lot of videos the last couple of days.”

Castor noticed that some Democrats nationwide cheered when the rioters were burning down the cities and attacked the federal law enforcement officers last summer in the aftermath of the death of George Floyd.

“Many [Democrats] in Washington using really the most inflammatory rhetoric as possible to use,” he said. “But here when you have the president of the United States give a speech and says ‘You should peacefully make your thinking known to the people in Congress,’ he’s all of a sudden the villain. So you better be careful what you wish for.”

During his Jan. 6 speech, which later became the focus of the Democrats’ impeachment against him, Trump told his supporters, “I know that everyone here will soon be marching over to the Capitol building to peacefully and patriotically make your voices heard.”

It’s unclear which Democrats’ remarks the Trump team will cite during the impeachment trial.

Amid the Black Lives Matter protests, Rep. Ayanna Pressley (D-Mass.) said there should be “unrest in the streets.”

“Make the phone calls, send the emails, show up,” she said in an interview with MSNBC’s “AM Joy.” “There needs to be unrest in the streets for as long as there’s unrest in our lives. And unfortunately, there’s plenty to go around.”