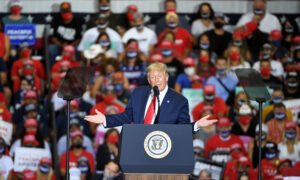 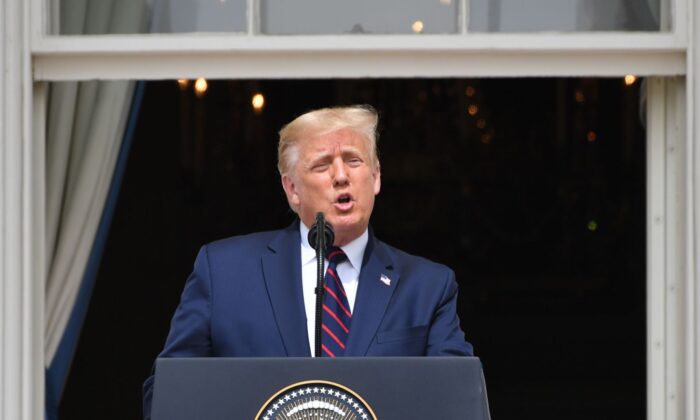 President Donald Trump speaks from the Truman Balcony at the White House during the signing ceremony of the Abraham Accords where the countries of Bahrain and the United Arab Emirates recognize Israel, on the South Lawn of the White House on Sept. 15, 2020. (Saul Loeb/AFP via Getty Images)
Donald Trump

Trump said the move will “change the course of history,” bring about a “new Middle East,” and create an era of “peace and prosperity.” He noted that the White House achieved two peace agreements in a single month.

“It’s an important day for peace,” he said.

Israeli Prime Minister Benjamin Netanyahu signed deals with the Kingdom of Bahrain and the United Arab Emirates (UAE) after the three nations agreed on the measure to normalize relations.

“HISTORIC day for PEACE in the Middle East,” Trump wrote on Twitter. “I am welcoming leaders from Israel, the United Arab Emirates, and the Kingdom of Bahrain to the White House to sign landmark deals that no one thought was possible.”

Netanyahu on Sept. 15 said it “heralds a new dawn of peace” between Jewish people and others, saying Trump has brought about a “realistic” chance of peace between Israel and the Palestinians. “This was unimaginable a few years ago,” the prime minister said.

The move represents another diplomatic victory for Trump, who has cast himself a peacemaker and has sought to end U.S. involvement in foreign wars—coming two months before the November election.

Critics have noted that the peace deals ignore Palestinians, but it is hoped that the deals will bring forth better Arab–Israeli relations.

Meanwhile, House Speaker Nancy Pelosi (D-Calif.), who hailed the deal, said she has concerns about a commitment for the UAE to purchase F-35 fighter jets.

“As we learn more about the full details of both agreements, questions remain—specifically, regarding the commitment that the UAE has received from the Trump Administration to purchase American-made F-35 aircraft. The U.S. Congress, on a bipartisan basis, will be watching and monitoring to ensure that Israel can maintain its qualitative military edge in the region,” she said in a statement.

The deal will normalize commercial, security, and diplomatic relations between Israel and Bahrain, as well as Israel and the UAE. The other Arab countries that have normalized relations with Israel are Egypt and Jordan.

“This is very fast,” White House adviser Jared Kushner told The Associated Press last week. “The region is responding very favorably to the UAE deal, and hopefully it’s a sign that even more will come.”

The agreement deals a major setback to Palestinian leader and Palestinian Authority President Mahmoud Abbas, who criticized the Israel–UAE deal when it was signed in August.

“We aren’t worried about the nonsense that happens here and there and especially in recent days, when a trilateral agreement between the Emirates, Israel, and America was announced,” Abbas said.

“They [the UAE] have turned their backs on everything: the rights of the Palestinian people, the Palestinian state, the two-state solution, and the holy city of Jerusalem.”