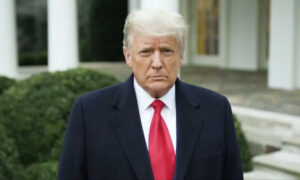 President Donald Trump told reporters outside the White House on Tuesday that the fresh Democrat push for a second impeachment is part of a long-running campaign against him that is fueling anger among his supporters.

“On the impeachment, it’s really a continuation of the greatest witch hunt in the history of politics,” Trump said. “It’s ridiculous. It’s absolutely ridiculous. This impeachment is causing tremendous anger, and you’re doing it and it’s really a terrible thing that they’re doing.”

Democrats on Monday released a resolution charging Trump with “incitement of insurrection,” accusing Trump of inspiring the Jan. 6 storming of the U.S. Capitol. Trump in a speech that day called for supporters to go to the Capitol, but stressed they should stay peaceful.

Speaking to reporters on Tuesday, the president reiterated his call for peace, saying, “we want absolutely no violence.”

Democrats have been trying to pressure Vice President Mike Pence and the Cabinet to remove Trump by invoking the 25th Amendment. A source told The Epoch Times that Pence doesn’t support the move. A House Republican on Monday blocked a resolution that called on Pence to invoke the amendment.

House Speaker Nancy Pelosi (D-Calif.) told colleagues in a recent letter that if Pence and a majority of the Cabinet don’t invoke the 25th Amendment, Democrats plan to move forward with another impeachment.

“I want no violence,” he added.

Later, after his arrival at the Joint Base Andrews prior to his departure for Alamo, Texas, Trump was asked about his responsibility for the violent breach of the U.S. Capitol, in which a number of people lost their lives. Trump rejected the suggestion that he egged on the crowd to commit violence, saying that his speech was “totally appropriate.”

“They’ve analyzed my speech and my words and my final paragraph, my final sentence, and everybody to a T thought it was totally appropriate,” Trump said before boarding Air Force One.

In his speech on Jan. 6, Trump accused media and big tech of abusing their power and interfering in the election, while reiterating his claim that he was cheated out of an electoral win.

While the president said, “We fight like Hell and if you don’t fight like Hell, you’re not going to have a country anymore,” his remarks seemed to be in reference to political engagement and he later made clear that the day’s protest was to remain peaceful.

“We have come to demand that Congress do the right thing and only count the electors who have been lawfully slated, lawfully slated,” Trump said. “I know that everyone here will soon be marching over to the Capitol building to peacefully and patriotically make your voices heard.”

At the end of his speech, he urged people to “walk down Pennsylvania Avenue” and “try and give our Republicans, the weak ones, because the strong ones don’t need any of our help, we’re going to try and give them the kind of pride and boldness that they need to take back our country.”

In Alamo, Trump is expected to deliver remarks about his immigration efforts.