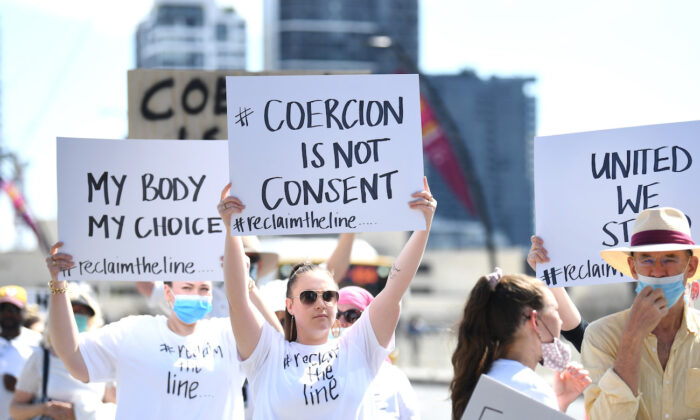 Protesters march across Victoria Bridge during a rally against a mandatory Covid-19 vaccine in Brisbane, Australia, on Oct. 1, 2021. (Dan Peled/Getty Images)
Australia

Australia ‘Does Not Have a Bill of Rights’: Judge Rules Vaccine Mandates Legal

Public health orders requiring teachers, health professionals, and construction workers to be vaccinated or face restrictions on their freedom of movement are valid, according to a court ruling in Australia’s most populous state, New South Wales (NSW), on Oct. 15.

Al-Munir Kassam, a Sydney-based construction worker; Natasha Henry, a Byron Bay-based aged care worker; and eight other plaintiffs, launched legal action in September against the state’s vaccine mandate—which many argued would force them to receive the vaccine otherwise risk losing their job.

During the height of the recent Delta outbreak in Sydney, the NSW government mandated those living within a “hotspot” needed to receive one dose of the vaccine before they could leave their local government area (LGA) to work. These restrictions have since been removed.

Health Minister Brad Hazzard, Chief Medical Officer Kerry Chant, and the state and federal government were the subjects of the lawsuit.

Justice Robert Beech-Jones of the NSW Supreme Court said the court’s function was to determine whether health restrictions were legally valid and whether a minister “acting reasonably” would implement similar measures to deal with a public health crisis.

He considered the following arguments from the plaintiffs, including whether the public health orders impugned on the right to freedom of movement, the right to bodily integrity, and whether they were arbitrary or “unreasonable” because they were discriminating on the basis of vaccine status.

Beech-Jones argued the state health minister had the power to abrogate rights, saying public health orders were doing the “very thing which the legislation sets out to achieve.”

“So far as the right to bodily integrity is concerned, it is not violated as the impugned orders do not authorise the involuntary vaccination of anyone,” he said in his judgement.

In fact, vaccine mandates in their legal construction allow residents to opt-out of receiving the jab, however, at the risk of not being employed or being granted entry into certain venues.

“So far as the impairment of freedom of movement is concerned, the degree of impairment differs depending on whether a person is vaccinated or unvaccinated,” Beech-Jones added. “Curtailing the free movement of persons including their movement to and at work are the very type of restrictions that the Public Health Act clearly authorises.”

He noted within his reasoning that “this country does not have a bill of rights” in response to the plaintiffs’ argument that the Public Health Act did not authorise interference with a person’s rights or freedoms.

Lastly, Beech-Jones, said the public health orders were not construed as “unreasonable,” noting that only when individuals were differentiated on the “basis of race, gender, or the mere holding of a political opinion” would they be at severe risk of being “invalid as unreasonable.”

“However, the differential treatment of people according to their vaccination status is not arbitrary,” he said.

The judge dismissed all claims with costs to be agreed to.

The judgement is the first in a series across Australia challenging restrictions on unvaccinated individuals. It also comes before an impending action launched by a paramedic and regional deputy mayor John Larter.

Larter is challenging a public health order mandating that health workers in the state receive the first dose of the vaccine by Sept. 30 and the second dose by Nov. 30.

Meanwhile, the current proceedings were viewed 1,412,278 times, including nearly 390,000 times on day one of the hearing proper on Sept. 30—indicating significant interest in the case.

According to court data, the audience peaked at 58,484 individuals during the initial directions hearing after the YouTube link was shared across the social media platform Telegram.