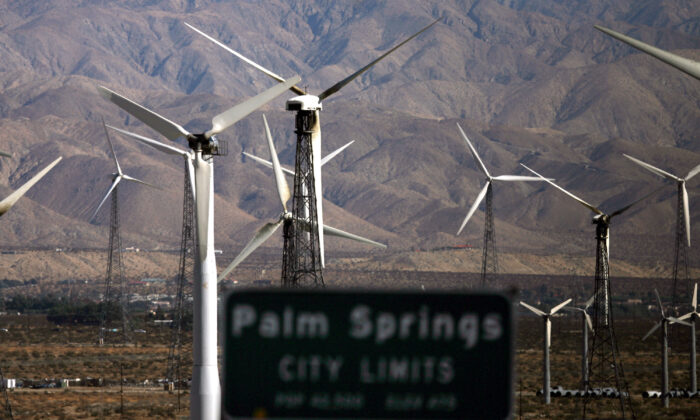 A windfarm is seen near Palm Springs, Calif., on Dec. 30, 2006. (Gabriel Bouys/AFP via Getty Images)
Viewpoints

The IEA’s Plan to Destroy Freedom and Save the Planet

If you liked gas lines after the Colonial Pipeline was shut down by a hacking—or if the rolling blackouts last summer in California were your idea of fun—you will love what the international global warming warriors at the International Energy Agency have planned for us.

The agency is the world’s most influential international energy policy organization, made up of 30 prosperous member-states, including the United States—its biggest funder, of course—the UK, Australia, New Zealand, Canada, and Japan. Ironically, the IEA was formed in the wake of the 1973 oil crisis to develop policies that would prevent such energy disruptions from happening again. Now, it wants to cause those very disruptions in the name of fighting global warming.

The agency doesn’t admit that. But major shortages and dislocations would be the almost certain consequence if its recommended radical policies were aggressively implemented. You see, the IEA doesn’t want to just reduce carbon emissions. It wants to eliminate them entirely by setting a goal of zero net carbon emissions (ZNE) by 2050. Otherwise, we are all doomed!

Toward this end, the IEA just issued “Net Zero by 2050: A Roadmap for the Global Energy Sector,” a 200-plus-page report urging specific actions to attain this almost surely unattainable goal. It makes for chilling reading since it’s clear from reading the report that the global warming warriors are green with envy (get it?) about how the COVID-19 fight successfully redirected individual behavior and reset societal norms—so now they want to do it to us, too.

But there is a big difference between COVID and global warming. Whereas our pandemic dislocations are (hopefully) temporary, the IEA’s would never end. Moreover, COVID restrictions will seem like minor nuisances compared to major societal dislocations the IEA plans.

Decimate the Oil and Gas Industry: The report foresees forcing a “major contraction of oil and gas production.” It calls for forbidding all future oil and gas exploration and refusing permits for any new extraction of oil, gas, and coal.

Replace Fossil Fuels With Low-Emission Hydrogen: The report predicts replacing fossil fuels by “using hydrogen-based fuels for ships and planes, as well as hydrogen in heavy industries like steel and chemicals.” Such technology doesn’t exist yet. Not to worry. If governments put a mere $90 billion into research, the technology will be ready by 2030 “with a portfolio of demonstration projects.”

We Will Be Forced Into Electric Vehicles (EV): Achieving NZE will require us to replace vehicles with internal combustion engines with EVs, i.e., electric vehicles. The report wants to force this transformation immediately. Just nine years from now, it expects the total number of EVs to rise to 60 percent from 5 percent.

You Will Also Be Forced to Take the Bus: The IEA also wants far fewer automobiles in private hands. Thus, the report predicts on page 86 that policies will be put in place that will require urbanites to make about 50 percent of their trips using public transportation, with the remainder consigned to riding a bicycle or walking. The report expects car ownership in the world to plunge to 20 percent by 2050 from 35 percent now—with only 5 percent of households owning more than one vehicle.

Thou Shalt Rarely Fly: Page 135 calls for “comprehensive government policies that promote a shift toward high-speed rail and rein in expansion of long-haul commercial flying.” Business and pleasure travel aren’t to exceed 2019 levels. (If you want a vivid illustration of how well that will turn out, check out the California high-speed “train to nowhere” boondoggle that wasted tens of billions and still isn’t carrying passengers anywhere they want to go.)

You Will Be Hot in the Summer and Cold in the Winter: Your ability to set your own thermostats will be regulated. In the summer, you will not be able to cool your home below 75 degrees Fahrenheit, and not heat above 66 to 67 degrees in the freezing winter. Jimmy Carter’s cardigan sweater is ready for a comeback! Also, you will be forced to reduce the temperature of your hot water, so get ready for tepid showers!

The key to this grand future is electricity—to fuel EVs, cook our food, heat our homes, drive our industries, operate our entertainment devices, run our trains, and allow for the other accoutrements of modern life. But all that will require tremendous growth in generation—raising the obvious question of how we will create all that needed power after dramatically cutting the use of natural gas and phasing out coal.

Of course, windmills and solar power! But these aren’t reliable sources. Windmills freeze in the winter—not to mention kill many millions of birds and bats—and solar power doesn’t generate electricity at night or on cloudy days. Then there is the major battery problem to allow storing that generated electricity for later use. Indeed, California’s reliance on unreliable renewables was one of the factors leading to the rolling blackouts last summer. Oh, well, they’ll think of something.

What about nuclear power? The report supports its use but doesn’t push it as a solution to power generation, stating on page 115 that it expects nuclear power to be “below 10 percent in 2050.”

How much will all of this cost? It’s beyond imagination. I mean, we haven’t even gotten into the mandatory commercial and residential building retrofits for which the report calls, nor the transformation of planes, ships, and major industry into using hydrogen fuels.

So, how will all of that be paid for? Private investment. But also—you guessed it—lots and lots of taxes—and not just on the rich. There will be carbon taxes. There will be road fees. There will be congestion charges. And yes, there will be increased taxes on electricity after they force us to rely almost exclusively on that source of energy to live modern lives.

As you ponder these and many other proposed head-swimming “reforms” the IEA plans, remember: It’s all for our own good! The planet is cooking! There is a world to save! All they demand in return is that we surrender our lifestyles, prosperity, and personal freedom.