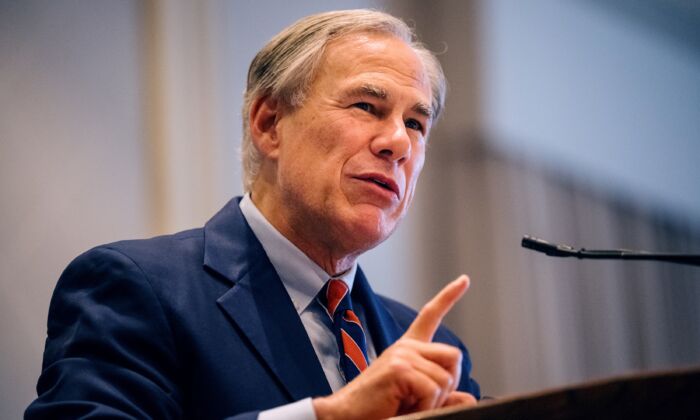 Texas Gov. Greg Abbott has sent a letter to President Joe Biden saying Texas will escalate border security measures by invoking a clause of the U.S. Constitution to “protect its own territory against invasion by the Mexican drug cartels” amid rampant illegal immigration.

“Your sustained dereliction of duty compels Texas to invoke the powers reserved in Article I, § 10, Clause 3, which represents ‘an acknowledgement of the States’ sovereign interest in protecting their borders,’” the Republican governor wrote (pdf).

“By opening our border to this record-breaking level of illegal immigration, you and your Administration are in violation of Article IV, § 4 of the U.S. Constitution.”

Days before that, the governor wrote that he invoked the invasion clauses of the U.S. and Texas constitutions to deploy the National Guard to the border, construct the border wall, allow the Texas Department of Public Safety to arrest illegal immigrants, and send some military vehicles to the border. Abbott, for months, has been sending busloads filled with illegal aliens to Democrat-controlled cities such as Washington, Chicago, New York, and now Philadelphia.

“In the more than 240 years of our great nation, no Administration has done more than yours to place the States in ‘imminent Danger’—a direct result of your policy decisions and refusal to deliver on the Article IV, § 4 guarantee,” Abbott wrote to Biden. “In the absence of action by your Administration to secure the border, every act by Texas officials is taken pursuant to the authority that the Founders recognized in Article I, § 10, Clause 3.”

The governor—who easily won his reelection bid against Democrat Beto O’Rourke on Nov. 8—also wrote that his administration “escalate our efforts to repel and turn back any immigrant who seeks to enter our State at a border crossing that Congress has designated as illegal,” will arrest criminals who violate state laws, and will return people who crossed into Texas illegally back to the border.

Following Abbott’s letter and invocation of the invasion clause, the Biden administration has yet to issue a public response. The Epoch Times has contacted the Department of Homeland Security, which oversees U.S. Customs and Border Protection and U.S. Immigration and Customs Enforcement, for comment.

The White House issued a response to Abbott’s recent statements and accused the governor of creating confusion.

“We recognize there is currently a race to the bottom amongst some Republican officials desperately vying for political relevance, but using asylum seekers fleeing communism and law enforcement officials as political pawns in their stunt circus is wrong and dangerous,” White House assistant press secretary Abdullah Hasan told ABC News on Monday.

“Your silence in the face of our repeated pleas is deafening. Your refusal to even visit the border for a firsthand look at the chaos you have caused is damning. Two years of inaction on your part now leave Texas with no choice but to escalate our efforts to secure our State,” Abbott wrote. “Your open-border policies, which have catalyzed an unprecedented crisis of illegal immigration, are the sole cause of Texas having to invoke our constitutional authority to defend ourselves.”

Abbott’s budget director, Sarah Hicks, was asked by a reporter last week about Abbott’s invocation of the invasion clause. Hicks remarked that it wasn’t really a change in Texas’s tactics.

“I don’t think it is a change in overall tactic as much as it is a reminder to all of us, to Congress and to the members working the issue that this is serious and it demands a full and serious response,” Hicks said.

On Nov. 16, the governor sent a separate letter to the Texas Department of Public Safety and the Texas Military Department and called on them to expand their efforts to deal with “growing illegal immigration along the Texas-Mexico border,” according to a news release.

“You have an essential assignment: Use every available tool and strategy to fight back against the unprecedented invasion that Texas is seeing at our border. Until Congress acts or the Biden Administration does its constitutionally required job, Texas Guardsmen and Troopers must bear the burden of securing the border,” it said.

“These actions are part of a larger strategy to use every available tool to fight back against the record-breaking level of illegal immigration,” the Texas Military Department said in a statement to the Texas Tribune. “The Texas National Guard is taking unprecedented measures to safeguard our border and to repel and turn-back immigrants trying to cross the border illegally.”

The war of words over illegal immigration comes as a watchdog, the Federation for American Immigration Reform (FAIR), reported in early November that the number of aliens who have entered the U.S. since Biden took over last year has reached 5.5 million. Dan Stein, president of FAIR, told NTD News that figure appears to be an all-time high.