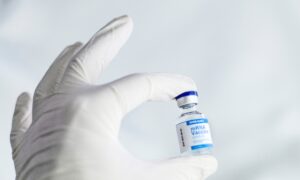 The fact that U.S. government policy allows aliens from troubled nations—including those who enter the country illegally—to remain in the United States for humanitarian reasons doesn’t mean they are entitled to apply for green cards, the Supreme Court ruled unanimously.

The decision came June 7 as the federal government finds itself overwhelmed by a rush of would-be immigrants flooding the nation’s border with Mexico. The White House wants the Mexican government to do more to curb illegal immigration to the United States. President Joe Biden ended the Trump-era “remain in Mexico” policy that required asylum-seekers at the southern border to wait in Mexico while their claims are processed.

Secretary of Homeland Security Alejandro Mayorkas, the respondent in the court case, spoke with Mexican Secretary of Foreign Relations Marcelo Ebrard on June 4 about the two countries’ “close cooperation and partnership to manage northbound irregular migration flows and address southbound weapons flows to Mexico from the United States,” according to a government summary.

The petitioners, Jose Santos Sanchez and Sonia Gonzalez, a married couple from El Salvador living in New Jersey, now have four children, including one who was born in the United States. Sanchez entered the country illegally in 1997. The United States gave El Salvador the temporary protected status (TPS) designation in 2001 after a series of earthquakes in that country and gave protection to the couple under the program.

The TPS program allows individuals from countries in crisis to temporarily reside in the United States while adverse conditions continue to exist at home. The designation is applied by the U.S. Department of Homeland Security to countries experiencing ongoing armed conflict or environmental disasters such as earthquakes, hurricanes, or epidemics.

There were about 320,000 TPS recipients living in the United States as of March, according to one estimate.

In the court opinion, Kagan noted that Sanchez entered this country illegally from El Salvador and was given temporary protected status. The fact that he came into the United States without authorization meant he wasn’t eligible for permanent resident status, also known as a green card.

“Sanchez now wishes to become a lawful permanent resident (LPR) of the United States,” she continued. “The question here is whether the conferral of TPS enables him to obtain LPR status despite his unlawful entry. We hold that it does not.”

In 2014, USCIS turned down Sanchez’s application for a green card because he was deemed not to have been lawfully admitted to the United States.

“‘Recipients of TPS,’ the agency reasoned, ‘must still meet the threshold requirement’ of a lawful entry,” the justice continued.

Sanchez challenged the decision and a U.S. District Court agreed with him, but the U.S. Court of Appeals for the 3rd Circuit reversed, holding that “a grant of TPS does not constitute an ‘admission’ into the United States.”

“The court observed that ‘admission’ and ‘status’ are separate concepts in immigration law,” Kagan wrote. “So, the court concluded, providing a person with nonimmigrant status (as the TPS provision does) does not mean admitting him.

“Because a grant of TPS does not come with a ticket of admission, it does not eliminate the disqualifying effect of an unlawful entry.”

During oral arguments on April 19, Justice Brett Kavanaugh seemed to foreshadow the court’s decision in the case.

“We need to be careful about tinkering with the immigration statutes as written, particularly when Congress has … such a primary role here,” Kavanaugh told Sanchez’s attorney. “Don’t you think … if Congress was intending to do what you want, it was almost certain there would be more explicit language?”

The Immigration Reform Law Institute (IRLI) applauded the new court ruling, which it said recognized that Congress didn’t intend to reward illegal border-crossing by offering illegal aliens an opportunity to obtain lawful status in the U.S.

“Thankfully, today the Court declined to water down the law, but instead maintained the standard that illegal entry into our country will not be tolerated, much less rewarded,” Dale L. Wilcox, executive director and general counsel of IRLI, said in a statement.

“We are seeing right now what happens when deliberate non-enforcement sends the opposite message: an engineered surge, crisis, and chaos at the border. We are pleased that the Court refused to add to that crisis today.”