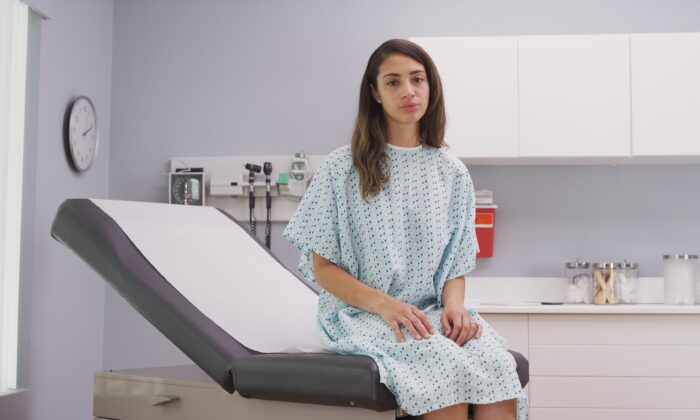 Each year over a million teenage girls get this invasive, sometimes traumatic exam—without medical cause. (Rocketclips, Inc/Shutterstock)
Health

Each year over a million teenage girls get this invasive, sometimes traumatic exam—without medical cause
By Jennifer Margulis

After a young woman we’ll call Jane had her first pelvic exam, her doctor wrote her a prescription for birth control pills.

“What are these for?” she asked, perplexed.

“Because you’re having sex,” her doctor said.

“No I’m not,” Jane responded, turning red in the face.

“It was physically traumatic and emotionally humiliating,” said Jane, who requested that The Epoch Times not use her real name.

Young women such as Jane who go to the gynecologist are often subjected to manual pelvic examinations as a routine part of their visits. But a pelvic exam, even when done gently, can be both painful and embarrassing. And, it turns out, at least half of these exams are being conducted without any medical indication.

Indeed, according to a 2020 scientific investigation by a team of researchers from the Centers for Disease Control and Prevention and the University of California–San Francisco, more than 2.5 million girls and young women, ages 15 to 20, undergo a pelvic examination when they visit the doctor.

According to their research, which was published in the peer-reviewed journal, JAMA Internal Medicine, half of these exams, some 1.3 million, were unnecessary.

ACOG: Invasive Exams Should Not Be Routine

Pelvic exams involve examining the outer genitalia and the perineum (the tissue between the vulva and the anus) for signs of abnormalities, including lesions, warts, cysts, and tumors.

After an external examination, the doctor inserts one to two fingers of one hand inside the vagina to feel the vaginal walls and the patient’s cervix in order to check for masses or other abnormalities. At the same time, the doctor uses the other hand to palpitate the outside of the patient’s uterus.

Once part of routine well-woman care, in 2018, the American College of Obstetricians and Gynecologists (ACOG) recommended that pelvic exams only be performed when there is a medically valid reason to do so, based on an individual patient’s history or symptoms.

According to ACOG, cervical problems, a history of genital cancer, or exposure to diethylstilbestrol—a synthetic form of estrogen that was given to pregnant women to prevent miscarriage that was later shown to cause cancer—are medical indications for pelvic exams.

In the same committee opinion, ACOG details that pelvic exams aren’t needed before prescribing oral contraceptives. So, instead of being a routine part of standard gynecological care, ACOG asserts, the decision to perform a pelvic examination “should be shared decision between the patient and her obstetrician-gynecologist.”

A Blip on the Radar

But that isn’t what’s happening, says Dr. Nathan Riley, an OB-GYN in Louisville, Kentucky, who wasn’t involved in the JAMA study. According to Riley, most gynecologists are so busy that they don’t take the time to explain to patients what their options are.

“There are so many misaligned incentive structures that make it impossible for doctors to do the right thing,” Riley says. “They’ve got to see 20 patients this morning—that’s their mandate from the higher-ups—and you’re just a blip on the radar.”

Furthermore, Riley argues that doing unnecessary pelvic exams on female teenagers and young adults is a symptom of a larger problem in the way medicine is practiced in the United States.

“A lot of the inadequacies within OB-GYN care are a consequence of us standardizing women’s health care for every individual, from adolescence all the way through menopause,” Riley says. “But you’re a person. And you’re being explored by somebody’s hands. You as a patient have the right to ask, ‘Why are you putting your hands inside of me?’”

The issue isn’t just that the pelvic exam isn’t medically indicated. As anyone who has had one, including this writer, can tell you, it’s also painful, often embarrassing, and potentially harmful.

“Not only is this not a necessary exam, you could actually cause some trauma for a young girl who has never had anything inside her vagina,” Riley points out.

“I think that these exams can be emotionally traumatic,” Franz says. “If you’re doing a pelvic on someone who’s not having sex and has an intact hymen, why would you do that?”

Dr. Suzanne Gilberg-Lenz is an OB-GYN based in Beverly Hills, California, who has been practicing medicine for 20 years. Gilberg-Lenz says there are less-invasive ways to check young women for cancer and other gynecological health problems.

“There aren’t that many medical reasons to do a pelvic exam,” Gilberg-Lenz says, adding that she doesn’t recommend these exams for anyone under 21 who isn’t sexually active. A pelvic exam also need not be a given for adults who are. If one of her patients has concerning symptoms, Gilberg-Lenz usually suggests starting with an ultrasound, which is non-invasive and available at her office.

But the important thing, Gilberg-Lenz says, is that these decisions are made as a team.

“Your first experience with gynecological care needs to be a positive, affirming experience where there is shared decision making,” Gilberg-Lenz says.

That is the approach that Franz uses as well. Too often, however, she notes that that isn’t the case among those in her profession.

“We do things based on protocol, based on recommendations, and we don’t look at the whole person. You get into a habit but … that doesn’t make it right,” Franz says. Instead, “medicine needs to return wholeheartedly to looking at the patient as a person and using critical thinking and what’s best for this person.”

Ask for a Pause

So what do you do if you are a young woman going to the gynecologist for the first time or the parent of a teen or young adult who needs gynecological care? Riley advises his patients to learn about their right to informed consent. Your doctor should be taking the time to explain the benefits and risks of every recommended procedure, he says. And, Riley insists, you always have the right to ask for clarification and to refuse treatment if you feel uncomfortable.

“Just asking for a pause is critical,” Riley says. “It forces the physician to explain to you in their words why they want to do an exam. And if they can’t verbalize their reasons and answer your questions, you can say: ‘It doesn’t sound like there’s much benefit to doing this. I think I’ll pass.’”

Franz also talks directly to her patients about gynecological exams so they know what to expect. And both Riley and Franz say that you as the patient—at any age—should insist that the doctor explain the procedure beforehand, and talk about what they are doing as it is happening.

Finally, patient advocates recommend bringing someone with you when you go to the doctor. A parent, relative, or close friend can accompany you to the gynecologist. If a friend or relative isn’t available, ACOG suggests patients request that a “chaperone,”—usually a nurse or a medical assistant—be present during all breast, genital, and rectal exams.