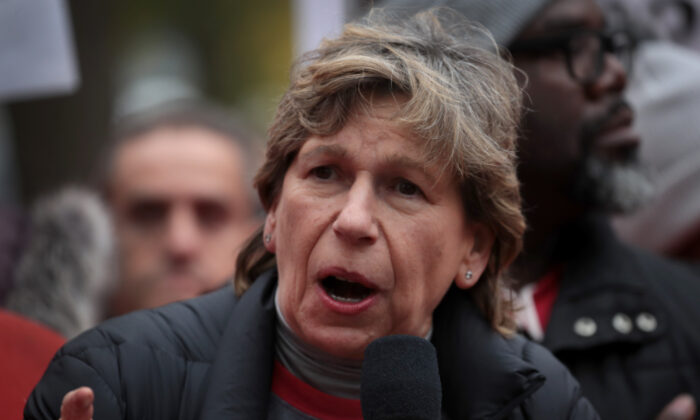 The president of the American Federation of Teachers (AFT), Randi Weingarten, has drawn criticism after she labeled Jewish parents pushing for schools to reopen as privileged members of the “ownership class.”

Weingarten, who is herself Jewish and married to a rabbi serving a New York City-based progressive congregation, was asked in a phone interview in March with the Jewish Telegraphic Agency about those in the Jewish community who are “very skeptical” of efforts from teachers unions to keep schools closed.

Specifically, the interviewer asked Weingarten about what she thinks of parents in Los Angeles who are baffled to see teachers refusing to go back to teach in classrooms while their schools are receiving millions of dollars in pandemic aid. The United Teachers of Los Angeles, the union representing some 33,000 teachers in the nation’s second-largest district, last month condemned the California governor’s reopening plan, calling it “a recipe for propagating structural racism.”

Weingarten replied that she has “a very pointed response here for Jews making this argument.”

“American Jews are now part of the ownership class,” Weingarten said, echoing the claim made by the Los Angeles teachers union. “Jews were immigrants from somewhere else. And they needed the right to have public education. And they needed power to have enough income and wealth for their families that they could put their kids through college and their kids could do better than they have done.”

“What I hear when I hear that question is that those who are in the ownership class now want to take that ladder of opportunity away from those who do not have it,” she added.

Weingarten went on to say that Jewish parents who want their children to return to classrooms are making a “privileged argument” against teachers who don’t feel safe to teach in person amid the pandemic.

“I would actually argue that when teachers feel safe to go to in-person learning, that gives more assurance to parents than anything else,” she said.

Weingarten’s comments have caused criticism from the Jewish community, including StandWithUs, a non-profit fighting anti-Semitism on American campuses.

“We work with many Jewish students and parents in Los Angeles and are extremely disappointed by Randi Weingarten’s inaccurate and dangerous generalizations about our community,” Roz Rothstein, co-founder and CEO of StandWithUs, told the Washington Free Beacon. “Her comments are shockingly out of touch with the actual experiences of countless Jewish families before and during the COVID-19 pandemic, give undue legitimacy to anti-Semitic stereotypes, and do nothing to help bring people in Los Angeles together during this difficult time.”

In response, Weingarten dismissed accusations of anti-Semitism, highlighting her identity as rebbetzin, or wife of a rabbi.

“Calling a rebbitzin anti-Semitic…really?” she wrote on Twitter. “My entire life is dedicated to promoting Jewish values like tikkun olam (repairing a broken world).”

The AFT, which Weingarten has headed since 2008, is the second-largest teachers’ union in the United States. It has 1.7 million members and was one of the major supporters of President Joe Biden during the 2020 election.