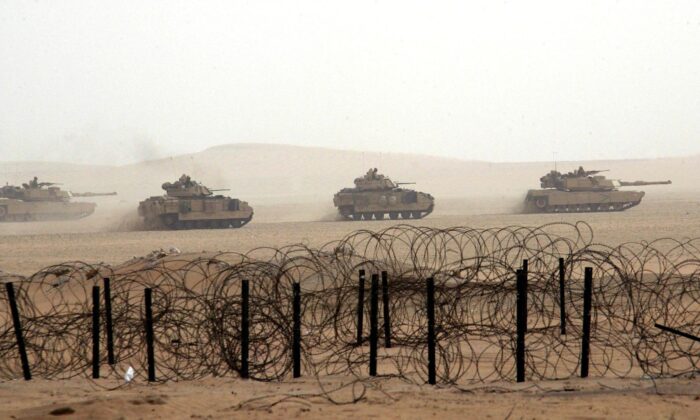 In September 2002, the George W. Bush administration said the war against Iraq would cost upward of $200 billion. As it turns out, that wouldn’t even cover the interest payments.

This is according to a Sept. 1 study from Brown University’s Costs of War Project, launched about 10 years ago to address perceived shortfalls in how the government measures and reports the toll war has taken on the United States.

According to the report, the total budgetary costs and future obligations of the post-9/11 wars are about $8 trillion in current dollars. That includes more than $2.1 trillion spent by the Defense Department, $1 trillion in interest payments—split about evenly between the Iraq and Afghan conflicts—and $2.2 trillion on future health care obligations through 2050.

The Costs of War Project also released new data about human costs, calculating that roughly 929,000 people were killed from the terror wars—including more than 387,000 civilians and 7,000 U.S. troops.

Both the human and financial cost estimates are conservative figures, according to the Costs of War Project.

“Several times as many more have been killed as a reverberating effect of the wars—because, for example, of water loss, sewage and other infrastructural issues, and war-related disease,” the group stated.

The Costs of War Project held a webinar on Sept. 1 for researchers to discuss their results.

“One way to visualize the scale of that number is if you had $1,000 bills, $1 million would be 4.3 inches high, $1 billion would be 358 feet high—about the height of the Statute of Liberty—and $1 trillion would be 67 miles high, which is well farther than how far Elon Musk went in his rocket,” Bilmes said.

The reason Americans haven’t felt this cost is because the wars have been financed via debt instead of taxation, Bilmes noted, dubbing them the “credit-card wars.”

“We used to raise taxes to fund wars,” she said, noting that top marginal rates were 92 percent during Korean War and 77 percent in Vietnam.

“Most Americans pay lower taxes now than before the wars started. If [voters] don’t think about how you pay for that, then it’s easy to continue wars for a long time.”

Interest rates have been at near-record lows since the 2008 financial crisis, allowing the U.S. government to continue financing its overseas conflicts.

“This is a feature of the length of the wars, not a bug. It wouldn’t have been possible without these rates,” Bilmes said.

If rates revert even to historical averages of around 5.5 percent, the amount the U.S. government would have to pay on interest and future health care costs would skyrocket. Bilmes expressed concern that the government might default on its obligations to U.S. veterans if this happens, which is why she has proposed a Veterans Trust Fund.

President Joe Biden discussed the Costs of War Project data when addressing the nation about the Afghanistan withdrawal the day before.

The $2 trillion figure cited by Biden is more than double the official Department of Defense (DoD) estimates.

“This [$837 billion DoD estimate] is, of course, correct—if we focus only on what the DoD was appropriated for the Afghanistan war and leave out other major costs, perhaps most importantly, the costs of caring for the post-9/11 war veterans,” the Costs of War report reads.

“These constant refrains we hear are dehumanizing—things like, ‘Afghanistan is the graveyard of empires,’ rather than the graveyard of tens of thousands of people, as our report has just shown,” she said. “Unless we have a new way of telling the story of what the United States does when it goes to war, we’re going to find ourselves in another Afghanistan.”