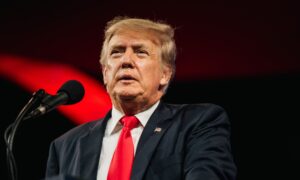 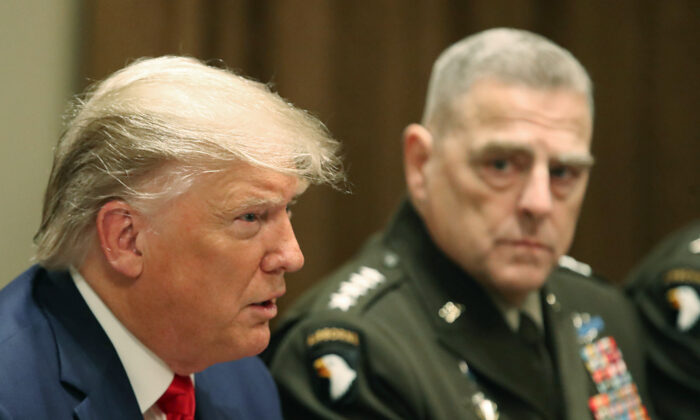 ‘Sorry to Inform You’: Trump Responds to Report That Top General Suggested He Wanted Post-Election Coup

Former President Donald Trump responded to anonymously sourced reports claiming a top U.S. general made comments he was worried about a coup attempt after the 2020 election.

Gen. Mark Milley, the chairman of the Joint Chiefs of Staff, allegedly told his subordinates he felt the need to be “on guard” after Nov. 3, according to a book from two Washington Post reporters that cited anonymous officials. “You can’t do this without the military. You can’t do this without the CIA and the FBI. We’re the guys with the guns,” the general reportedly said.

But Trump, in a statement on Thursday, said Milley’s comments were false.

“I never threatened, or spoke about, to anyone, a coup of our Government,” Trump said in an emailed statement. “So ridiculous! Sorry to inform you, but an Election is my form of ‘coup,’ and if I was going to do a coup, one of the last people I would want to do it with is General Mark Milley.”

“He got his job only because the world’s most overrated general, James Mattis, could not stand him, had no respect for him, and would not recommend him,” the former president added. “To me the fact that Mattis didn’t like him, just like Obama didn’t like him and actually fired Milley, was a good thing, not a bad thing. I often act counter to people’s advice who I don’t respect.”

In June, Milley was criticized by Republican lawmakers for his apparent defense of critical race theory during a congressional hearing, saying he’s read both Karl Marx and Soviet dictator and founder Vladimir Lenin. But, according to Milley, having read such authors “doesn’t make me a communist. So, what is wrong with understanding … the country which we are here to defend?”

And Trump commented on Milley’s actions in the summer of 2020 amid Black Lives Matter demonstrations and riots around the United States and near the White House. At one point last year, officials said the historic St. John’s Church in Washington D.C.’s Layafette Square was set on fire.

“In any event, I lost respect for Milley when we walked together to St. John’s Church (which was still smoldering from a Radical Left fire set the day before), side by side, a walk that has now been proven to be totally appropriate—and the following day Milley choked like a dog in front of the Fake News when they told him they thought he should not have been walking with the President, which turned out to be incorrect,” the former commander-in-chief said. Trump then faulted Milley for his remarks at the time.

“I saw at that moment he had no courage or skill, certainly not the type of person I would be talking ‘coup’ with. I’m not into coups!” Trump wrote.