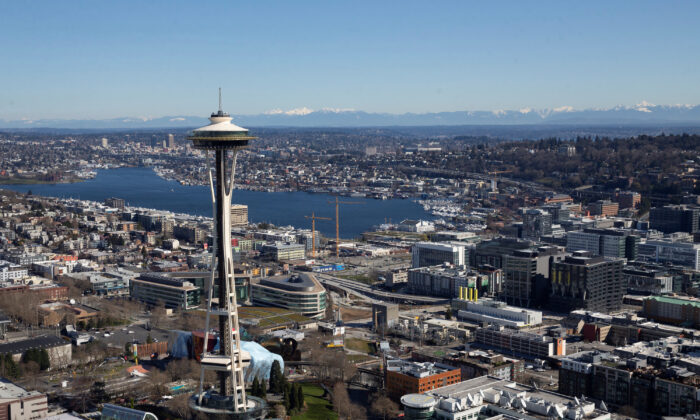 The Space Needle is shown in this aerial photo over Seattle, Wash., on March 16, 2020. (Lindsey Wasson/Reuters)
Baseball

The Mariners will host the 2023 All-Star Game, Major League Baseball announced Thursday at the Space Needle in Seattle.

The Midsummer Classic will return to the Emerald City for the third time overall and first since 2001. Seattle hosted the 1979 event at the Kingdome and the 2001 event at T-Mobile Park, which was then named Safeco Field.

“Major League Baseball is delighted to bring the All-Star Game to the Mariners and their fans in 2023,” commissioner Rob Manfred said. “The City of Seattle has been home to many of our game’s most popular figures in recent history, and we look forward to showcasing the sport’s current stars and everything that All-Star Week has to offer throughout the Emerald City.

“I congratulate the Mariners organization and the local leadership in the City of Seattle and state of Washington for their efforts to bring the Midsummer Classic back to the Pacific Northwest at T-Mobile Park for a second time.”

The Los Angeles Dodgers are scheduled to host the 2022 All-Star Game before Seattle gets its chance for the 93rd edition of the game the following year.

“The Mariners are honored to represent Seattle and the Pacific Northwest as the hosts of the 93rd All-Star Game in 2023,” Mariners chairman and managing partner John Stanton said.

“The Mariners are dedicated to creating unforgettable experiences for our fans, serving our communities and enriching lives by sharing our love of baseball. The All-Star Week is an unparalleled opportunity to fulfill these key tenants of our purpose and mission and an amazing opportunity to show off our region to the nation and world.”

Philadelphia is set to host the 2026 All-Star Game, marking the 250th anniversary of the signing of the Declaration of Independence.