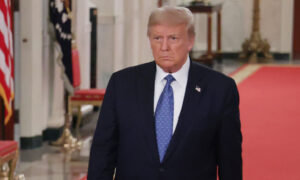 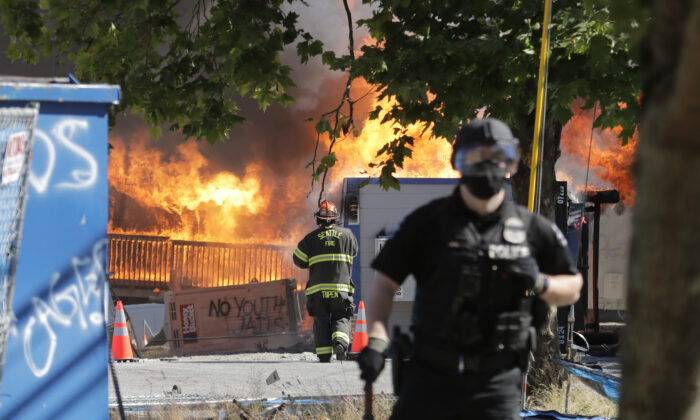 Update: Police released bodycam footage of the riots and photographs of some of the injuries police officers suffered.

Rioters in Seattle set fire to a construction site of a King County juvenile detention facility and courthouse, later hurling explosives and other projectiles at police, leading to injuries to more than some 59 officers.

The demonstration, organized by a group pushing to abolish the Seattle Police Department, prompted concerns of violence, with a number of business owners boarding up their stores in hopes of protecting them. Almost four dozen people were arrested.

After gathering in the Capitol Hill neighborhood around 2:15 p.m.—where the so-called autonomous zone had been located—the crowd traveled about 10 blocks south to 12th Avenue and Jefferson Street and torched the construction site.

A group of about a dozen people was responsible for the fire, according to the Seattle Police Department. Firefighters responded and put the flames out.

The group then headed north, smashing windows at businesses as they traveled along 12th Avenue.

In Capitol Hill, rioters spray-painted the Seattle Police Department’s East Precinct and attempted to disable cameras and damage fencing that was erected around the building to try to protect it. Officers also noticed smoke in the building lobby, indicating someone set fire to the precinct, and found possible explosive damage to walls inside. Arson and bomb detectives were investigating.

Due to the ongoing damage and public safety risks, police declared a riot around 5 p.m. and began using crowd control measures, such as blast balls and OC spray—but not tear gas—to try to disperse the crowd.

Rioters refused to disperse and continued smashing windows and damaging buildings in the area. They also hurled rocks, mortars, explosives, and other projectiles, according to the police and video footage from the scene.

Forty-seven people were arrested for assaulting officers, obstruction, and failure to disperse, according to the Seattle Police Department.

As of 10pm: Police have made 45 arrests in connection with today’s riot in the East Precinct. 21 officers sustained injuries after being struck by bricks, rocks mortars/other explosives. Most officers were able to return to duty. One was treated at a hospital for a knee injury.

Fifty-nine officers were injured during the mayhem, including one who was rushed to the hospital with a leg injury caused by an explosive. Injuries ranged from abrasions and bruising to burns and a torn meniscus.

Federal officers didn’t appear to be on the scene. A limited number were recently deployed to Seattle to help protect federal buildings.

The Seattle demonstration was organized in support of the people in Portland who have rioted on a nightly basis since late May.