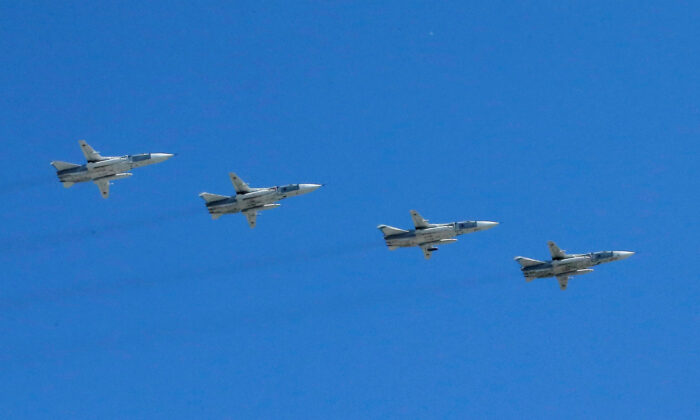 Russian Sukhoi Su-24M front-line bombers fly in formation during the Victory Day parade, marking the 71st anniversary of the victory over Nazi Germany in World War Two, above Red Square in Moscow, Russia, on May 9, 2016. (Maxim Shemetov/File/Reuters)
Europe

MOSCOW—Russian warplanes practiced bombing enemy ships in the Black Sea during training exercises, Russia said on Saturday, amid friction with the West over NATO drills in the region and following a recent incident with a British warship.

Moscow last week challenged the right of HMS Defender to pass through waters near Crimea, something London said it had every right to do. Russia annexed Crimea from Ukraine in 2014 but most of the world still recognizes it as part of Ukraine.

Russia said the vessel had illegally entered its territorial waters and accused London of a “provocation”. Moscow has said it could bomb British naval vessels if there are more such actions by the British navy off Crimea.

On Saturday, Russia’s Black Sea Fleet said warplanes from its aviation units and those of the southern military district had taken part in training drills.

“Aircraft crews … conducted training flights over the Black Sea, practicing missile and bombing strikes against simulated enemy ships,” it was quoted as saying by the RIA news agency.

The exercise comes as NATO, Ukraine, and allies conduct their large-scale Sea Breeze drills in the region.

Those drills are set to last two weeks and involve about 5,000 military personnel from NATO and other allies, and around 30 ships and 40 aircraft, with U.S. missile destroyer USS Ross and the U.S. Marine Corps taking part.

Moscow had called for the exercise to be cancelled and the Russian defense ministry has said it will react to safeguard national security if necessary.