Riding the Rails in Japan—Across the Country, and Deep Into History 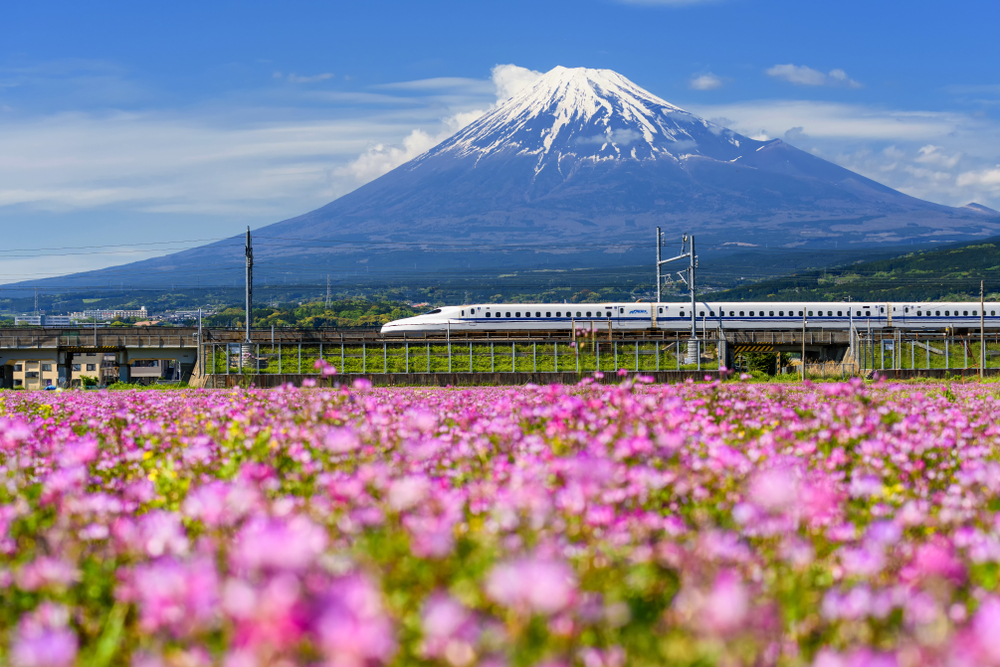 The Shinkansen, also known as the bullet train, runs past the imposing Mt. Fuji during the spring, while shibazakura flowers are in bloom. (Blanscape/Shutterstock.com)
Tell
Facebook
Tweet
Email

The train is on time—because the train is always on time. And I don’t have a seat.

After getting slightly turned around disembarking my train from Hiroshima, which got me here in a real hurry, I’m struggling to make my connection. Dashing down onto the proper platform, I hear the rumble and clang of the big Sonic–Nichirin train rolling up. The passengers waiting to board are, as usual, standing in perfect queues, tidy single lines along numbered stripes painted on the floor. In a moment, the rolling stock will stop, and doors for those numbered cars will slide open, precisely in the right spot.

But I don’t know which car—or corresponding stripe—is mine. I had arrived a little too late to book a seat assignment, so I’m left to try my luck on a handful of “non-reserved” cars. I ask a random passenger, just the one standing nearest me, where to find those. I expect him to point, or rattle off a number, but he doesn’t know, either.

Selflessly leaving his luggage in a pile on the floor, he runs with me, hurriedly asking in Japanese, where this lost Westerner should go. A few seconds later, the answer ascertained, I’m treading my stripe. And a minute after that, I’m sitting at a window of the Sonic, clickety-clacking on a ribbon of steel, headed deep into volcano country, hot springs ahead on the island of Kyushu.

For the Love of Train Travel

I’m in Japan, riding the rails. A lifetime train buff, I’ve crossed Russia on the Trans-Siberian and Australia on the Indian Pacific, and now I’m crisscrossing this Asian nation, enjoying the ride perhaps even more than the destination. In many ways, Japan’s 20th-century history is inextricably tied to these tracks, which will carry many during the upcoming Tokyo Olympic Games. While the rest of the world invested in roads, Japan invested in railways, and today, the annual ridership numbers at more than 10 billion (even Germany, another train-forward nation, only has a ridership of 2 billion).

Before my departure, I purchased a Japan Rail Pass, which is only available for sale outside the country. Established to promote tourism, passes are sold for 7-, 14-, or 21-day durations, with the weeklong pass priced at a little more than 33,000 yen (about $300). They allow access to all trains on the JR lines, including the Shinkansen, often called the “bullet train” by English-speakers, plus local transit in the big cities. Days can only be spent in those consecutive blocks, so the key to getting your money’s worth is to ride as much as possible.

And I ride, a lot. The actual pass is charmingly simple. In a mega-high-tech country—where robots sometimes bring room service—the JR pass is just a paper booklet, which I use to board train after train.

My first impression: the overwhelming speed. The Shinkansen (which means “new trunk line”) tops out at more than 200 miles per hour, carrying as many as 1,300 people in 16 cars, coasting through tunnels and around banked corners. The experience is more like zooming around on a magic carpet than rattling down the track on a choo-choo.

And also, the efficiency: The Japanese place a high value on punctuality. Trains arrive and leave exactly on time, in part because passengers follow those precise boarding procedures. A couple of years ago, famously, the West Japan Railway Company was compelled to issue an official apology, which was broadcast on national news outlets, when one of their trains left the station 25 seconds early, and one person missed the train.

Keeping the trains on time takes a combined, carefully coordinated effort, and strict fidelity to the clock. For example, when a Shinkansen train arrives at Tokyo Station, it has only a 12-minute turnaround time. Just seven minutes are allocated for the staff to rotate all the seats in the opposite direction and to clean the interior. The other five are given to passengers—two minutes for them to disembark upon arrival, then three, just before departure, for new ones to board.

I experience this precision, over and over again. For example, at Kobe Station, I have less than 10 minutes to make a connection. I’m worried that I won’t make it, even though I don’t have to switch platforms. I shouldn’t be. My train drops me off, then another train uses the same platform, exchanging its passengers, and then my train arrives. Like clockwork.

During a visit to the Kyoto Railway Museum, a wonderland for any rail fan, I learn more about the history. With the first line built from Tokyo to Yokohama between 1870 and 1872, railroads quickly became a key part of national development and, later, rebuilding after the Second World War.

First using British locomotives, Japan sought to reduce its dependence on foreign powers, and started making its own by the early 1900s. By 1938, plans for the first bullet trains took shape but were derailed by the war. Back on track by the late 1950s, the first Shinkansens started rolling on the main Tokaido line in 1964, built in time for the first Tokyo Olympics. That train cut travel times from Tokyo to Osaka from six hours to four. The Nozomi Shinkansen now makes that 340-mile journey in 2 hours and 16 minutes.

The museum includes 53 pieces of rolling stock, including a 20-track roundhouse built in 1914 that houses locomotives dating back as far as 1880. In the main hall, promenade, and Twilight Plaza, I marvel at coaches, freight wagons, and other locomotives, including some of the earliest Shinkansens from the 1960s. Happily, in many cases, you can actually climb inside and walk around the rolling stock, and I spend almost an entire day climbing through the cars.

With thousands of miles of track covering Honshu, Kyushu, and Hokkaido, Japan’s three main islands, I have options for my trip. I spend countless hours smiling out the window, passing landmarks like the soaring, snow-capped peak of Mount Fuji. I wander the stations, marveling at the hundreds of hole-in-the-wall restaurants and the ubiquitous vending machines that dispense everything from sake to dress shirts. A couple of times, I’m even upgraded to the Green Car, passing the four-leaf clover beside the door, which marks the good luck of everyone inside, and settling into an extra-comfortable green chair to enjoy the benefits of first class.

And I make it to the hot springs. Having completed my hasty trip on the Shinkansen from Hiroshima to Fukuoka, and transferred to the more conventional Sonic train, I spend the following days in the spa town of Beppu. I soak in a traditional hot spring, called an onsen, and even visit a restaurant where they cook your dinner using steam from the earth’s core. I try to relax in a sand bath, where I’m buried up to my neck in volcanic soil.

But soon, the train beckons me back. I still have a few days left on my little cardboard pass, and I want to wear it out. The track stretches before me, a whole country of possibilities ahead, and plenty of super-fast ways to get there, too.

Tim Johnson
Follow
Toronto-based writer Tim Johnson is always traveling in search of the next great story. Having visited 140 countries across all seven continents, he’s tracked lions on foot in Botswana, dug for dinosaur bones in Mongolia, and walked among a half-million penguins on South Georgia Island. He contributes to some of North America’s largest publications, including CNN Travel, Bloomberg, and The Globe and Mail.
Related

Recipes
Cherry Blossom Cookies to Capture the Taste of Spring

Destinations
Top 5 Places to See First as the World Reopens

Afar
Sacha Lodge: Where the Wild Things Still Are

Afar
How a Perilous Sahara Journey Ended in Faith, Strength, and Courage