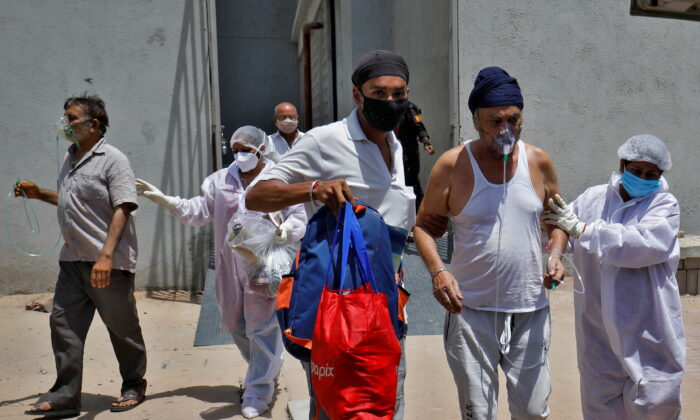 NEW DELHI—A 3-month-old baby boy from Nagpur city in central India tested positive for COVID-19, leading his desperate parents to reach out on Twitter for help.

A team of volunteers called India Cares connected the parents with a volunteer pediatrician who virtually guided the parents, who were under quarantine. The child tested negative five days later.

“Thank you for arranging the doctor’s call. Directions from Doctor were helpful. Baby’s second test came negative,” the baby’s parents said in a message to Pallavi Kulshrestha, the Delhi-based India Cares volunteer who coordinates consultations with a team of 45 volunteer doctors who are attending to patients throughout India.

India Cares is a citizen volunteer group of 3,900 people that came together last year during the pandemic when distressed Indians under lockdown started to reach out virtually for help.

Experiencing the unprecedented pandemic and lockdown for the first time, volunteers who had never met began to gather on WhatsApp, Twitter, and Telegram, connecting resources to demand. They came from all walks of life—homemakers, bureaucrats, students, doctors, engineers, and traders—from around India and from among the Indian diaspora abroad. As the group has expanded, so has its reach.

The group is needed now more than ever. In April, India began experiencing a second wave of COVID-19, setting several world records for the number of new cases in a single day, with 392,488 new cases on May 1. Along with the surge in new cases, there’s been a spike in deaths, and some signs of panic in the population.

In response, India Cares started to rally again in response to the new rounds of desperate messages. But this time, the demands were unlike last year’s, when the calls for help were about obtaining food provisions, sending migrants home under lockdown, and coordinating hospital beds.

Though the pandemic is the same, the realities have changed. Keeping in mind the overwhelming need for oxygen, plasma, and hospital beds faced by certain cities in India, India Cares decided to focus on providing online medical consultation, coordinating hospital beds, encouraging people to donate blood and plasma, running an awareness campaign about vaccination, and linking up resources to provide medicine.

So when Dr. Bhavi Vipulkumar Shah, who is based in the small town of Deesa, in Gujarat on the western coast of India, was referred to the 3-month-old’s case, she helped the young parents who had no idea how to test the baby’s oxygen saturation level.

“And they were asking about whether breastfeeding should be continued or not,” the pediatrician said, adding that both parents were COVID-positive. “I advised them to continue breastfeeding if the mother is not too ill to feed.”

Oxygen cylinder delivered to the lady 👍

Woke up @kishandips at midnight for this task. Have no words to thank him. Not once he showed any reluctance. Also thanking @Choprarun for the help in locating a cylinder supplier at such odd hours. Great support indeed.@indiacares_2020 https://t.co/umFGSBet92

Arjun Bir Sahi, a veteran of India’s army and a volunteer with India Cares, helps out with contacts and inputs. He said every volunteer at India Cares works pro bono, and the number is only increasing.

“We have a volunteer in Kolkatta who coordinates the delivery of COVID medicine when people under lockdown reach out to us for help. He sources the medicine from pharma in his city, and Blue Dart couriers provide free shipping around India while people pay online,” Sahi said.

He also has a team of professional designers working on social media campaigns, designing messages, and communication.

Dr. Nikunj Shah, 37, is based in the small city of Nandurbar in Maharashtra state on India’s west coast. He enrolled with India Cares during last year’s pandemic and continues to be available for teleconsultations during the current surge of cases, despite being in quarantine after testing positive on April 20.

“Many times, people are really panicked. There’s a lot of hysteria. There’s also not much awareness about how the disease propagates. For example, people don’t know that they should check their oxygen saturation level only after walking for six minutes,” said Shah. He helps four to five people on most days, with the number peaking to eight to 10 people some days.

Shah said being a frontline worker, he had been vaccinated, and yet he’s tested positive again.

“This time, it’s mild symptoms. Having gone through it myself, I understand people’s concerns very well. I’m continuing to help during quarantine because I can’t go out. I’m continuing in my way,” he said.

Recently, Shah was put in touch with an infected senior couple in Delhi who was alone, as their daughter was in London. They were uncertain about whether to take the wife to the hospital or allow her to be at home. After speaking with them, Shah advised them to take her to the hospital as she needed oxygen.

“Care India was able to locate a bed for her. Even when I can help a few people, I’m satisfied,” Shah said.

Megha Jain, a 29-year-old student of chartered accountancy, is the founder of @TeamSOSIndia, a volunteer group that numbers 500 people from around the country. They came together on social media last year to connect pandemic resources with those in need.

“We used to find distress messages on social media. And we used to see the distress and call them and tried to help them with whatever we could,” said Jain, who is based in Mumbai.

“Because when you’re suffering and there’s a patient in your family, you’re in shock. At that moment, it’s not mentally possible for them to call each and every hospital when you have a shortage of beds and make sure the patient is admitted. So we used to make sure that we’re with them. That’s how we started,” she said.

Jain has continued to attend to messages asking for help, despite the odds. Most of the messages during the current surge are coming from Delhi and the state of Uttar Pradesh in northern India; she says the group has now started getting calls from Kolkatta, a metropolitan area on India’s east coast.

Jain said her team believes in responding and in working together, rather than in complaining and blaming.

“Because it’s a pandemic and no one knew what’s happening. Even the health infrastructure of developed nations couldn’t stand this pandemic, right? We know the reality of our country. We’re a developing country; we have good infrastructure, but we still won’t be able to take this much pressure,” she said.

“Right from the peon in a government office to the highest authority to every political party, the ruling and the opposition, everyone is working toward it.”

When their group isn’t able to respond to a case, they pass it on to other emergency responders and charities or to whoever can respond, she said.

Jain shared the story of a couple, Rasik Mehta and Kalpana Mehta from the state of Gujrat, who lost their son to COVID-19 last year. The couple had a fixed deposit of over $20,000 (15 lakhs) for their son in the bank.

“Now they broke the FD of Rs 15 lakhs, to help lives of other COVID patients. They have also given their car to be used as an ambulance,” Jain shared in a message on Twitter, telling The Epoch Times on the phone that it’s important to spread positive messages during the current crisis.

Rasik Mehta & Kalpana Mehta a couple from #Gujarat had a FD for the future of their Son, whom they unfortunately lost to COVID last year. Now they broke the FD of Rs 15 lakh, to help lives of other #COVID19 patients. They have also given their Car to be used as an Ambulance. pic.twitter.com/pCSJdJ7geM

Like the Mehtas, many people have begun helping others, despite their own loss. The story of an 85-year-old COVID-positive man who gave up his bed to a young man after he saw that man’s wife along with their crying children asking hospital officials for a bed, went viral on Indian media this week.

Jain said the last few days have been very hard for her team because there are limited ventilators, and every day they’re getting many calls for intensive care beds and ventilators.

“Then people tell us the patient is no more. That’s very disturbing. We literally cry,” said Jain, adding that every day, someone in her team has a breakdown.

“It’s not just the messages. We are having our own families in crisis as well. But yes, we are working! Every single person has a COVID crisis in the family. The day before yesterday, I lost my uncle, a very close person. We are still working. As many lives as we can save, we have to do that,” she said.

The Mumbai North Central District Forum (MNCDF) is a citizens forum of over 40 people that was founded to address various civil issues. After the COVID-19 pandemic began last year, MNCDF started to attend to all kinds of requests for help.

The forum has a 24/7 dedicated team of 20 volunteers who are encouraging people to donate plasma during this surge.

“There are times when they need us to speak to the insurance companies or to put them under different government schemes that are available,” said Karnani, adding that there are situations when the hospitals inflate the cost of COVID medicine that has been capped by federal and state governments.

“A hospital had wrongfully withheld the discharge of a patient who died in the hospital,” said Karnani about a recent case. The bills had been inflated, and the family was traumatized. “I intervened up to the management level of the hospital and got an almost 40 to 50 percent reduction.”

Karnani said MNCDF is also working with lawmakers in the civic authority and the state legislature to escalate intervention on critical COVID-19 cases, or cases that have gone unattended.

“We have worked with the medical teams of a lot of elected representatives.”

There are other volunteers and volunteer forums that The Epoch Times reached out to during the current surge. Many worked late nights with no time to attend to media requests for interviews.

“Sorry! Not really in a state to talk with the media at this point. In the last 24 hours, lost 3 people. Left numb!” said one India Cares volunteer.

There are forums providing psychological counseling by phone to traumatized family members that The Epoch Times couldn’t talk to. A few individuals shared pictures of their workstations—one volunteer called his work station at home a “war zone.” Others shared screenshots of messages of gratitude or messages of tears and loss.