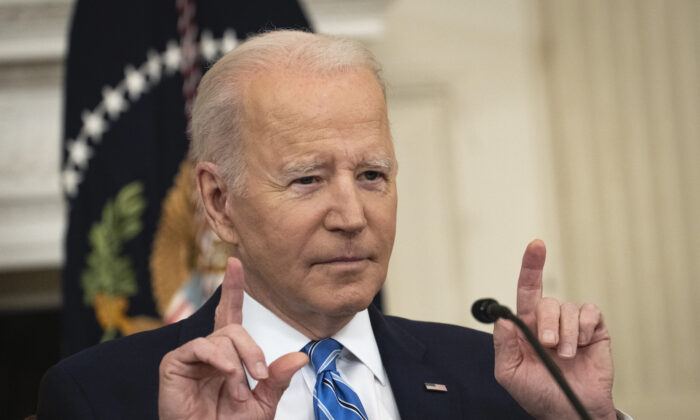 President Joe Biden speaks during a meeting with private sector CEOs in the State Dining Room of the White House in the District of Columbia on Jan. 26, 2022. (Drew Angerer/Getty Images)
Executive Branch

Reporter Asks Biden About Justice Breyer’s Retirement, Here Is How He Responds

President Joe Biden told reporters that he would have “more to say later” about Justice Stephen Breyer’s retirement.

“There has been no announcement from Justice Breyer—let him make whatever statement he wants to make, and I’m happy to talk about it later,” he said.

The president was asked to comment on the news of the liberal justice’s retirement right after several media outlets reported it and before a White House event scheduled for Wednesday afternoon.

White House said earlier that they don’t have yet any comment on Breyer’s retirement.

“It has always been the decision of any Supreme Court Justice if and when they decide to retire, and how they want to announce it, and that remains the case today. We have no additional details or information to share from White House,” White House Press Secretary Jen Psaki wrote in a Twitter post.

Breyer, 83, and the oldest member of the U.S. Supreme Court (SCOTUS), will retire at the end of the court’s current term that runs through the end of June, NBC News and CNN reported.

It will give Biden the opportunity to appoint a successor who could serve for decades.

Breyer was appointed to the Supreme Court by Democrat President Bill Clinton in 1994. Only conservative Justice Clarence Thomas, one of two black men ever on the high court, has served longer among the current justices, joining it in 1991.

Biden during the 2020 presidential election campaign pledged to nominate a black woman to fill any Supreme Court vacancy, which would be a historic first. Biden’s fellow Democrats hold a razor-thin majority in the U.S. Senate, which under the U.S. Constitution gets to confirm Supreme Court nominees.

Potential Biden nominees include Ketanji Brown Jackson, a former Breyer law clerk who was confirmed by the Senate last June to serve on an influential U.S. appellate court, and Leondra Kruger, who serves on the California Supreme Court.

A Biden appointee would not change the court’s ideological balance, but would enable him to refresh its liberal wing with a much younger jurist in the lifetime post.

After Biden took the 2020 election, some liberal activists urged Breyer to step aside while Democrats control the Senate, concerned that if he does not do so, Republicans could block confirmation of his successor in the chamber or a future Republican president could be able to name his replacement and tilt the court even further to the right.